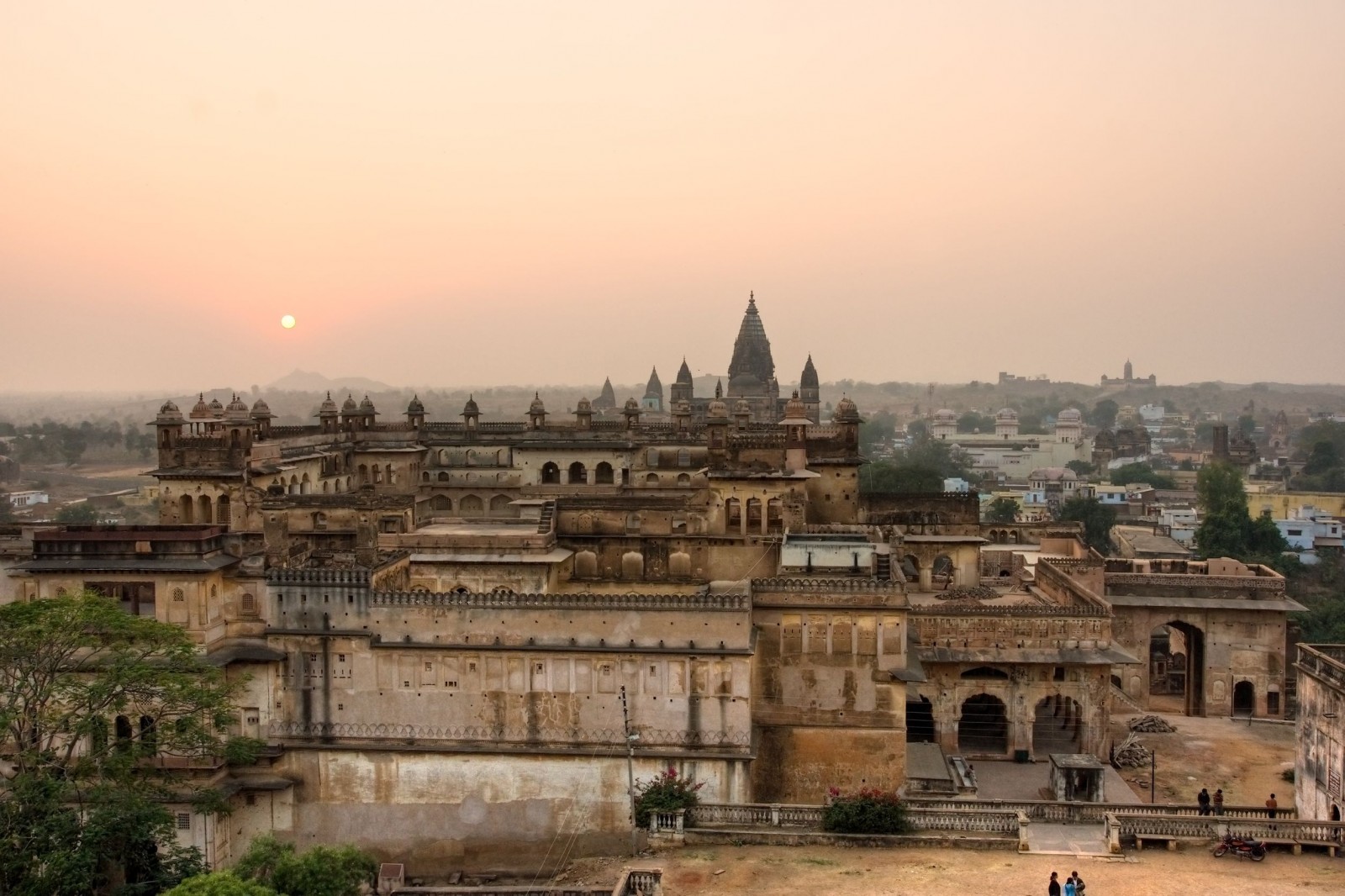 Orchha is a place nothing short of a fairyland. It appears to have lost track of time and remains an evergreen glorious capital of the Bundela Rajput kings. Orchha is a small town in the district of Tikamgarh in the state of Madhya Pradesh. Orchha means 'hidden' in the local Bundelkhandi language. The terminology is appropriate during the rule of the Bundelas as it was covered all around by thick forests. Today's Orchha reflects the old glory and magnificence of the powerful Bundelas. Orchha is known as a tourist hub and is considered one of the best places to visit in Madhya Pradesh. Orchha lies on the banks of the River Betwa and is 80 km from Tikamgarh which lies in the extreme north of Madhya Pradesh in Central India. The historic city of Jhansi is around 15 km from Orchha. Some other major cities and towns surrounding Orchha are Baragaon, Khailar, Simra, Barwa Saga, Bijoli, Hansari Gird and Pirthipur. Placed quaintly in the countryside of Bundelkhand, this cozy little town is also blessed with appalling natural beauty. The magnificent forts, royal palaces, enchanting temples and the chhatris symbolize the grandeur of Orchha. Besides, you also get to see the world renowned mural paintings of Orchha. The remains from historic periods still exist around the town lending a heavy feel to the atmosphere laden with an acute heritage feel. The splendor of the bygone gone era beckons tourists to visit and soak in the charm of the place. The town has deep roots embedded in the medieval times. Earlier it was famous as an erstwhile princely state. The legendary chieftain named Bundela Rudra Pratap Singh founded Orchha in the 16th century. Since then the town has witnessed many battles and conflicts. Raja Jujhar Singh was a monarch of Orchha who fought against the Mughal emperor Shah Jehan in the 17th century. This war had disastrous consequences which resulted in the Mughal army taking over the princely state and causing huge destruction of temples and other monuments between 1635 A.D and 1641 A.D. Interesting to note is the fact that this is the only place in the region not to have succumbed to the power of the Marathas. Tehri, today known as Tikamgarh was the capital of Orchha. Maharaja Hamir Singh was another famous king who ruled from 1848 to 1874. Later his successor Maharaja Pratap Singh ascended the throne in the year 1874 AD. They worked hard for the development of the kingdom and improved the irrigation facilities and state's infrastructure. Orchha was a prosperous and powerful dominion during their reign. Their descendant Vir Singh finally merged Orchha with the Union of India on 1st January 1950. Geography Orchha lies between two globally acclaimed tourist destinations of Agra and Khajuraho. Orchha sits handsomely on the coordinates 25.35° N and 78.64° E. This small town is at an elevation of 231 meters above sea level and lies on the banks of the serene Betwa River. The city of Jhansi is around 16 km away from Orchha. The climate of Orchha is a hot temperate type with very low humidity. The summers are extremely hot while the winters are freezing cold. Summer arrives in March and ends in June. The monsoons arrive in July, but rainfall is scanty. Winter arrives in December and lasts till February when the temperature dips below the 9°C mark. The best time to visit Orchha is from October to March, when the climate is pleasant and one can roam around the town with relative ease visiting the important monuments and temples. This little town is not much populated compared to other cities and towns of Madhya Pradesh. People here are mostly Hindus, but one can also see other religions as well. The total area of Orchha is 5048.00 square kilometers and the population stands at around 1 million inhabitants. The literacy rate is substandard compared to the nation literacy state. Only around 54% of the population are literate with males making up most of it. The males contributes 64% of the literate individuals while females number only 42%. Around 18% of the population is under 6 years. Various languages are spoken by the people of Orchha. Most of the population here speaks Hindi followed by Gujarati, Marathi and English. Orchha is famous for being primarily a tourist destination and when one enters the town, they can definitely feel as the reasons why the town is famous for tourism. Once it was the capital of the mighty Bundela dynasty, which is why you can see plenty of structures that have architectural genius scripted all over along with a unique built heritage. One can relish the historical sites as well as the natural beauty that the place has been blessed with. You can have a glimpse of the rich forts, grand palaces and graceful monuments that stand witness to Orchha's glorious past. Touring Orchha provides travelers the opportunity to soak in religious, adventurous and peaceful activities that make their day. One can explore the fine architecture of the palaces here or explore the various activities available by Orchha. The culture of Orchha reflects the era of the Bundelkhand kings. The culture is captivating and very rich in texture. The locals here still follow the customs that was practiced during the Bundela rule. The festivals celebrated here are the same as other places in Madhya Pradesh. Dussehra, Ram Navami and Diwali are the major festivals here. On Ram Navami the temples are decorated with coloured paper, lights and flowers. Cultural programs are held during Dussehra and the burning of Ravana effigies takes place. The main language spoken by the locals is Hindi. Marathi and Gujarati are other languages that are also spoken. English is spoken only by the educated people. Bundelkhandi is another language that is spoken by a particular section of people.