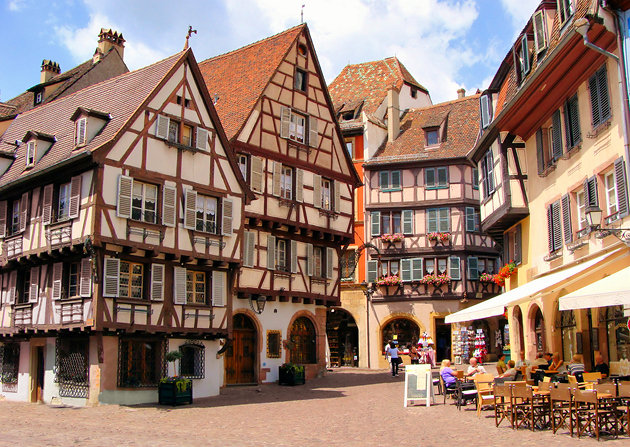 Colmar is a town with many attractions and an undeniable charm all its own including half-timbered houses, canals and the flower-decked town centre, etc. It offers all the intimacy of a medium-sized town and a remarkably diverse range of heritage sites. The best place to start your visit to Colmar is in the medieval old town. This historic part of Colmar Old Town has various interesting areas such as: the part of the old town described as 'Petite Venise' is especially; attractive, with lovely houses along the river banks; the Rue de Tanneurs (Tanners Street) with very tall houses where they once stretched pelts; the Quai de la Poissonnerie (Quai of the fishermen); the 14th century Ancient Customs House with magnificent stained glass windows and a roof decorated with colored tiles; While the great appeal of the old town is simply in strolling around enjoying its overall charm, there are also a good number of individual buildings of great interest to see as you explore. These include the Maison Pfister, built in 1537 at the corner of Rue des Merchands and especially notable for its façade, with decorative balcony and bright decorations by Christian Vacksterffer, which is an exemplary work of Renaissance art in the region of the Rhine. Another notable building is the famous 17th century “Maison de Têtes” (“House of heads”), so named because the façade is covered with over a hundred animal heads and faces. You can also see the double “loggia” and a statue of Bartholdi. Colmar also has several churches of interest to visitors. One of the most interesting here is the 13th century Convent of the Dominicans with its church and cloisters. The Dominicans in Colmar played an important part in the conservation of texts and the writing of a history of the city during the Middle Ages, called the Annals of the Dominicans.