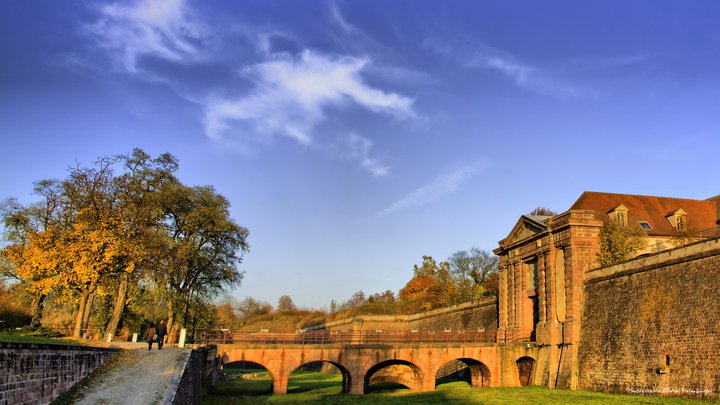 Today, it is considered as Vauban's masterpiece. Its architecture is unique in Europe, and the Citadel is listed as part of the world Heritage by UNESCO. Its parade ground, pure lines, 48 quarters forming a perfect octagon and bastion fortifications make it unique in its kind. Work began on the fortified town in 1698, to plans drawn by Vauban, a military engineer at the service of Louis XIV. Vauban died in 1707 and this, his last work, was completed by Louis de Cormontaigne.The city's layout was that of an 'ideal city', as was popular at the time, with a regular square grid street pattern inside an octagonal fortification.Generous space was given to a central square across the four blocks at the middle, flanked by an impressive church. Individual blocks were offered for private development, either as affluent houses in private gardens, or as properties for commercial rent. Simpler housing was provided in long tenement blocks, built inside each curtain wall, which also had the effect of shielding the better houses from the risk of cannon fire. Access was provided by large gateways in the principal four curtain walls. The fortifications are Vauban's final work and the culmination of his 'Third System'. There are two lines of defence, an inner enceinte de sûreté, the bastion wall around the city, and an outer enceinte de combat, a system of concentric star-shaped earthworks. The curtain wall was largely octagonal, with each flank separated roughly into three and the outer bastion projecting slightly, so as to flank the centre of the walls. Each corner had a raised outwardly-projecting pentagonal bastion tower, the highest points of the system. The outer earthworks were deep and occupied a greater area than the city itself. The inner walls were surrounded by tenailles before the centres of the curtain walls and counterguards before the bastions. In front of the centre of each curtain face was a large tetrahedral ravelin, those in front of the gateways also being topped by a reduit to the rear. Outside all of these earthworks was a covered way. The city suffered damage in World War II, but still represents a very clear example of the latest in fortification work at the beginning of the eighteenth century.