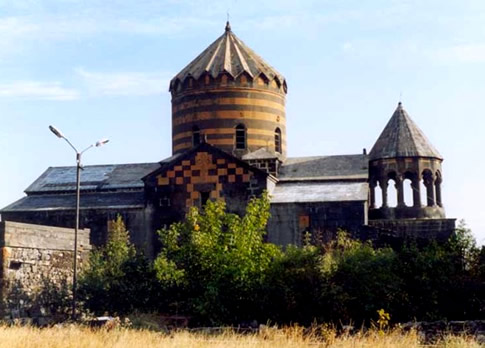 Its only church, St. Gevorg, is in the center of a wall-enclosed rectangle the north-eastern corner of which is occupied by celIs and service structures. The church, with its distinctive striped drum below the conical cupola, was rebuilt in 1661-69 by the architects Sahak Khizanetsi and his successor Murat. This cross-winged domed basilica structure of a considerable size is among the best works of architecture of those times. Architectural details emphasize the artistic expressiveness of the building. The round drum of the cupola is crowned with an umbrella-type tent. Over the cupola windows, shifted away from the central axes, there are high-relief carvings of the Evangelists. The portals are generously carved. In the interior of the church there have survived fragments of murals dating back to the seventeenth century, which were probably created by Nagash Ovnatan, the decorator of Echmiadzin cathedral and of a number of churches near Yerevan and Akulis. The open three-arch gallery was built simultaneously with the church: this is a rare phenomenon in the history of Armenian architecture. The gallery is crowned with a 12-column rotund belfry. The church was renovated in 1999.