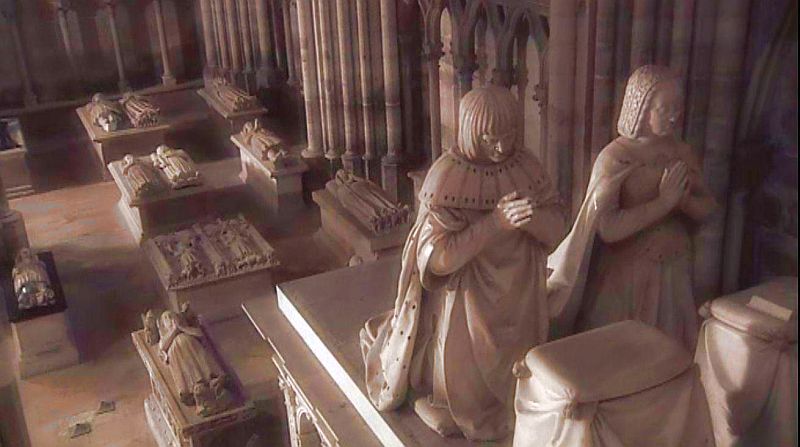 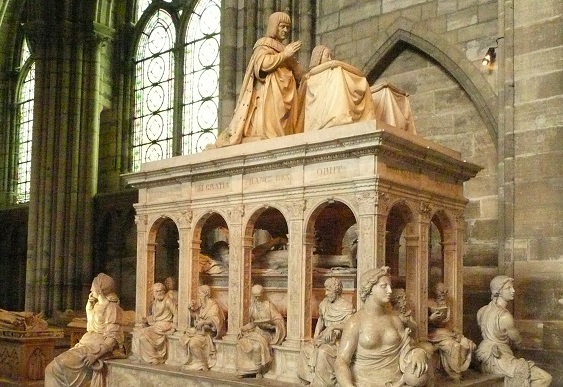 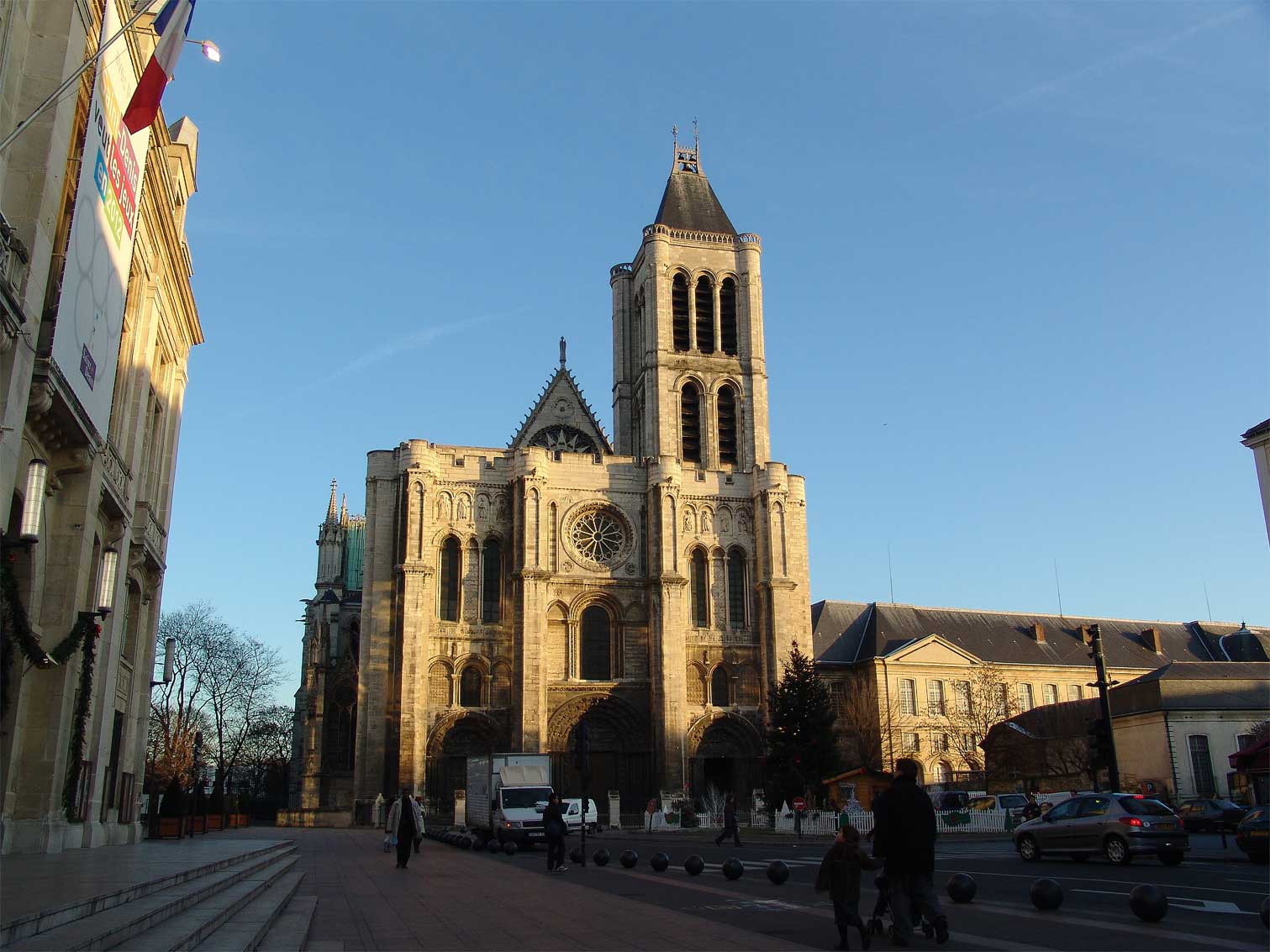 The Basilica of Saint Denis was built on the site of a cemetery where Dionysius, the first bishop of Paris, was buried around the year 250. According to legend, the saint was beheaded by the Romans either on the Île de la Cité or the Montmartre. After the execution Dionysius picked up his head and walked all the way here. The Abbey Dionysius (or Denis in French) was soon venerated and the site of his grave became a pilgrimage destination. An oratory was built on his grave as early as in the fourth century. In 475 Saint Genevieve, the patron saint of Paris, ordered the construction of a priory with a church, which was expanded in 630 by King Dagobert I. The king selected the church as his sepulchre church. After his burial in 639, the priory was elevated to the rank of abbey. Royal Connections The reign of King Dagobert I marked the start of a close connection between the abbey and the French monarchs. Almost all the kings and queens of France, up to King Louis XVIII in 1824, found their last resting place in Saint-Denis. The Benedictine abbey of Saint-Denis became the most powerful abbey in all of France and the abbots were often on personal terms with the royals. The most famous and influential of the abbots of Saint-Denis was abbot Suger, a counselor of the kings Louis VI and Louis VII. Around 1135, he started a construction project that turned the abbey church into a masterpiece of early Gothic architecture. It was the first such structure in the world and its architecture influenced many other ecclesiastical buildings, including the Notre-Dame. French Revolution The French Revolution of 1789 ended the might of the Saint-Denis abbey. The abbey, a symbol of the royals, was completely demolished in 1792; only the church was left standing. The revolutionaries also severely damaged the church's sculptures, interior and graves. Fortunately the many sepulchral monuments had been safely stowed away. The church was restored in the mid-nineteenth century by Viollet-le-Duc, the same architect responsible for the restoration of the Notre-Dame. The Church The church is a masterpiece of medieval architecture. We do not know who the master masons were who built the magnificent structure, but it is thought that the abbot Suger was partly responsible for the design. The choir and west facade were so impressive that they became a template for new cathedrals in France and beyond. Only one of the west (front) facade's two towers is still standing. The northern tower was destroyed soon after its construction after it was struck by lightning. A new north tower was constructed but was demolished in the nineteenth-century since it was on the verge of collapsing. The front facade has three portals instead of just one which was the norm at the time. Another novelty was the rose window's fine tracery which allowed more light to enter the building. The facade was decorated with numerous statues, most of which were demolished during the French Revolution. Interior The church has five naves instead of the then usual three naves. The church was revolutionary in the sense that many architectural innovations resulted in the creation of more and larger windows, which resulted in a lighter and brighter interior. The church also boasted cross-ribbed vaulting, and the spacious choir with a double ambulatory set the norm for new church construction. Many of the stained glass windows are still original. Others were destroyed during the French Revolution and replaced in the nineteenth century. A Royal Necropolis Thanks to its position as the sepulchre church for the French monarchs, the Basilica of Saint Denis is now home to more than seventy statues and tombs of royals. In total there are 42 kings, 32 queens and 63 princes and princesses buried in the church. Thanks to the large collection of monuments created over the centuries, you get a good idea of the evolution of funerary art from the Middle Ages to the nineteenth century. Nothing remains of the early medieval tombs, since King Louis IX decided around the year 1263 to renovate all the graves of his predecessors. The earliest sculptures from the thirteenth century show idealized recumbent figures of the deceased. Over the years the statues became more realistic. The statue in the south transept of Charles V, who died in 1380, is the first realistic portrait. It was created in 1364, on the day he was crowned king. During the Renaissance the funerary monuments became more elaborate culminating in grandiose monuments decorated with numerous statues. Notable examples are the tombs of Louis XII and his wife Anne de Bretagne (1515); Henri II and his wife Catherine de' Medici (1573); and the tomb of Francis I (1558), all masterpieces of Renaissance sculpture. The statue of Catherine de' Medici was so realistic that the queen refused it and ordered another sepulchral monument for herself and her late husband, with more idealized statues. n the Baroque era the recumbent figures were replaced with statues of kneeling figures, such as the praying statues of the unfortunate Louis XVI and Marie-Antoinette in the south transept. They were created around 1830, when the remains of the king and queen returned to Saint-Denis from the Madeleine cemetery in Paris. Their remains are in a separate grave in the crypt. The oldest funeral statue is that of the Merovingian king Childebert I, in the choir. Nearby are the graves of Clovis - the first Christian Frankish king - and Fredegund (died 597), third wife of King Chilperic I. The royal tombs are situated in the crypt, choir and transepts of the church. This section is separated from the rest by a fence. The entrance to the tombs is outside, in the south portal.