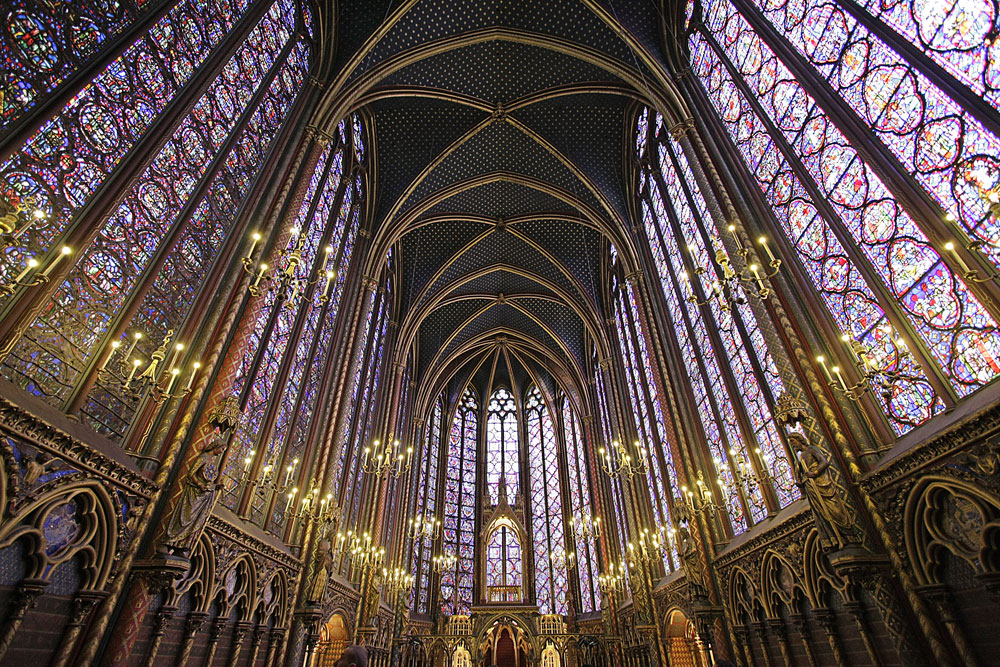 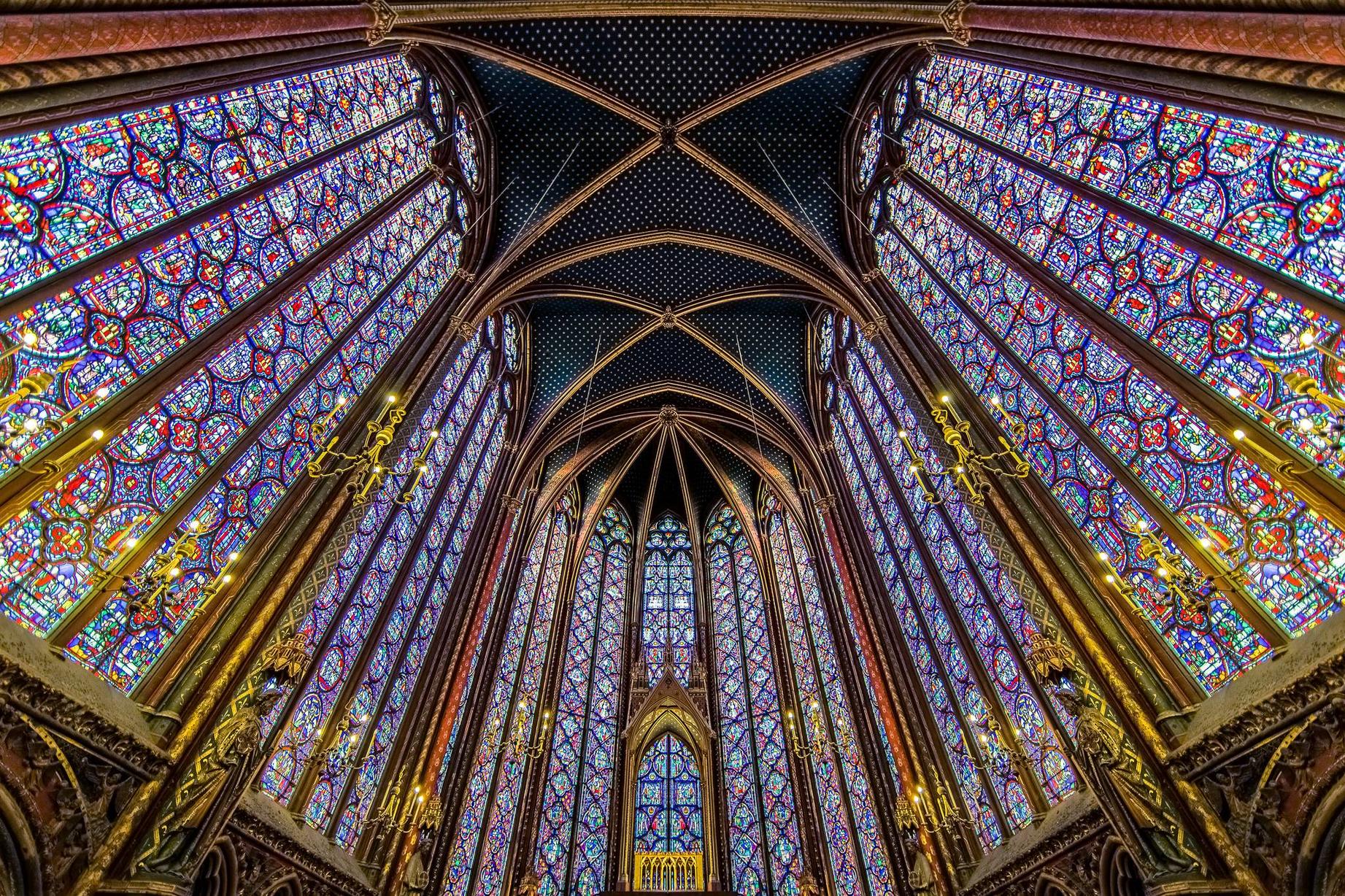 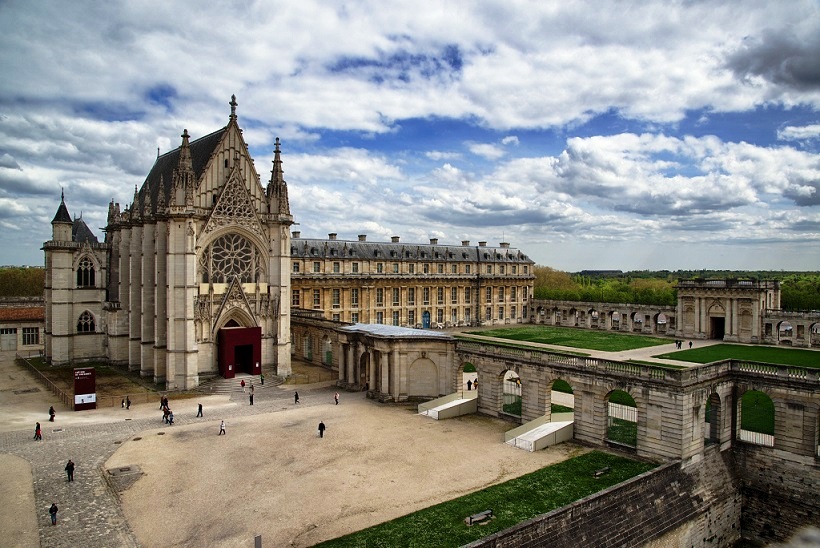 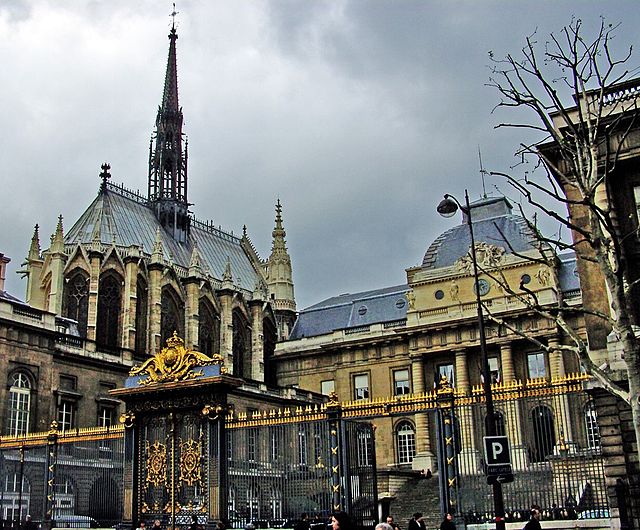 Located on the Ile de la Cité in the center of Paris, the idea for the Sainte-Chapelle (Holy Chapel) originated in 1241 with Louis IX, who was looking for a proper place to house the Crown of Thorns and a fragment of the True Cross, relics from the Passion that he had purchased two years prior from Byzantine Emperor Baldwin II. The king had paid quite a price for these relics, about 135,000 livres, nearly four times what it would cost to build the chapel to display them. More relics were added at later dates. The plans for Sainte-Chapelle are attributed to Pierre de Montreuil, who had also created designs for Saint-Denis and part of the Notre-Dame Cathedral. Groundbreaking occurred in 1242 and the chapel was completed in an amazing six years time. Considered a perfect example of the Rayonnant style of Gothic architecture (common in France), Saint-Chapelle measures 36 meters long, 17 meters wide, and 42.5 meters high (118 x 56 x 139 ft). It has a single nave, culminating in a chevet with seven panels. Outside, you'll find heavy buttresses at the base, contrasting with a much lighter feeling throughout the upper parts. The slate roof is topped by a 33-meter-high (108 ft) cedar spire that was crafted in the nineteenth century, but is an exact replica of the fifteenth-century spire that previously sat atop the chapel. Saint-Chapelle suffered much damage during the French Revolution. Some parts of the chapel - like furniture and stalls - disappeared altogether, the organ was moved elsewhere, and the precious relics were scattered, some never to be found again. The ones that were recovered are now housed at Notre-Dame. The Upper Chapel Consecrated by the Pope's legate, Eudes of Châteauroux, in April 1268, the Upper Chapel is an incredible example of ecclesiastical Gothic architecture. The part of the building that housed the relics and was reserved for the king, his friends, and his family, the Upper Chapel is an artistic masterpiece. Visitors marvel at the tall stained glass windows and the wonderful statues of the twelve apostles. The stained glass covers a total of 600 square meters (6,456 sq ft) in area and two-thirds of them are still thirteenth century originals. The western rose window, however, was crafted in the fifteenth century. The windows were removed briefly during the early nineteenth century and again during World War II to protect them from harm. They were painstakingly reinstalled after the war. The Lower Chapel The Lower Chapel is dedicated to the Virgin Mary and was once reserved for the king's staff. Its somewhat more humble design includes a low vaulted ceiling painted to resemble a starry sky and arched columns decorated with medallions that represent the Apostles. The columns are also adorned with French fleur-de-lis. Guests to the Lower Chapel can also visit tombstones representing some of the chapel's former reverends.