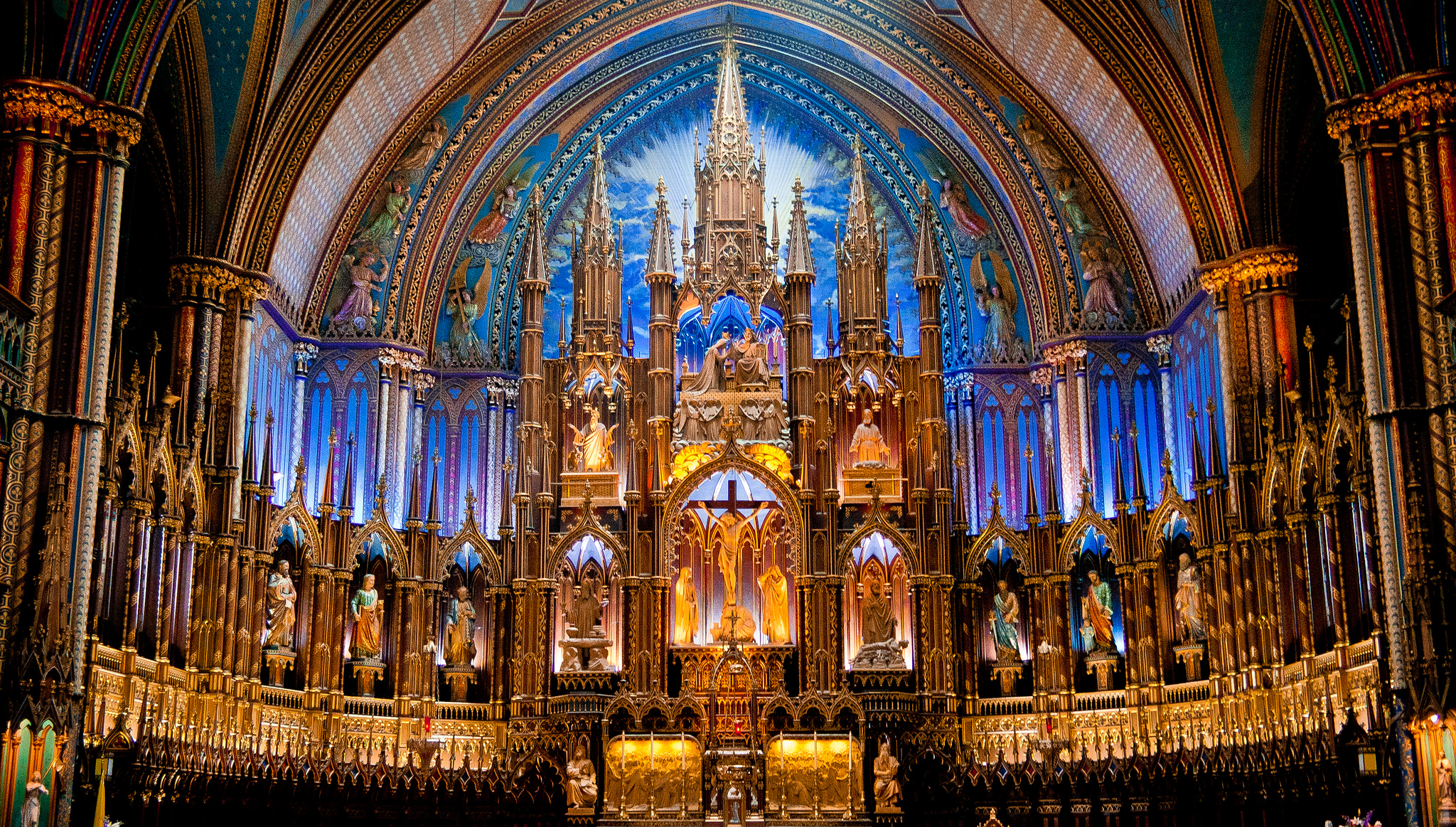 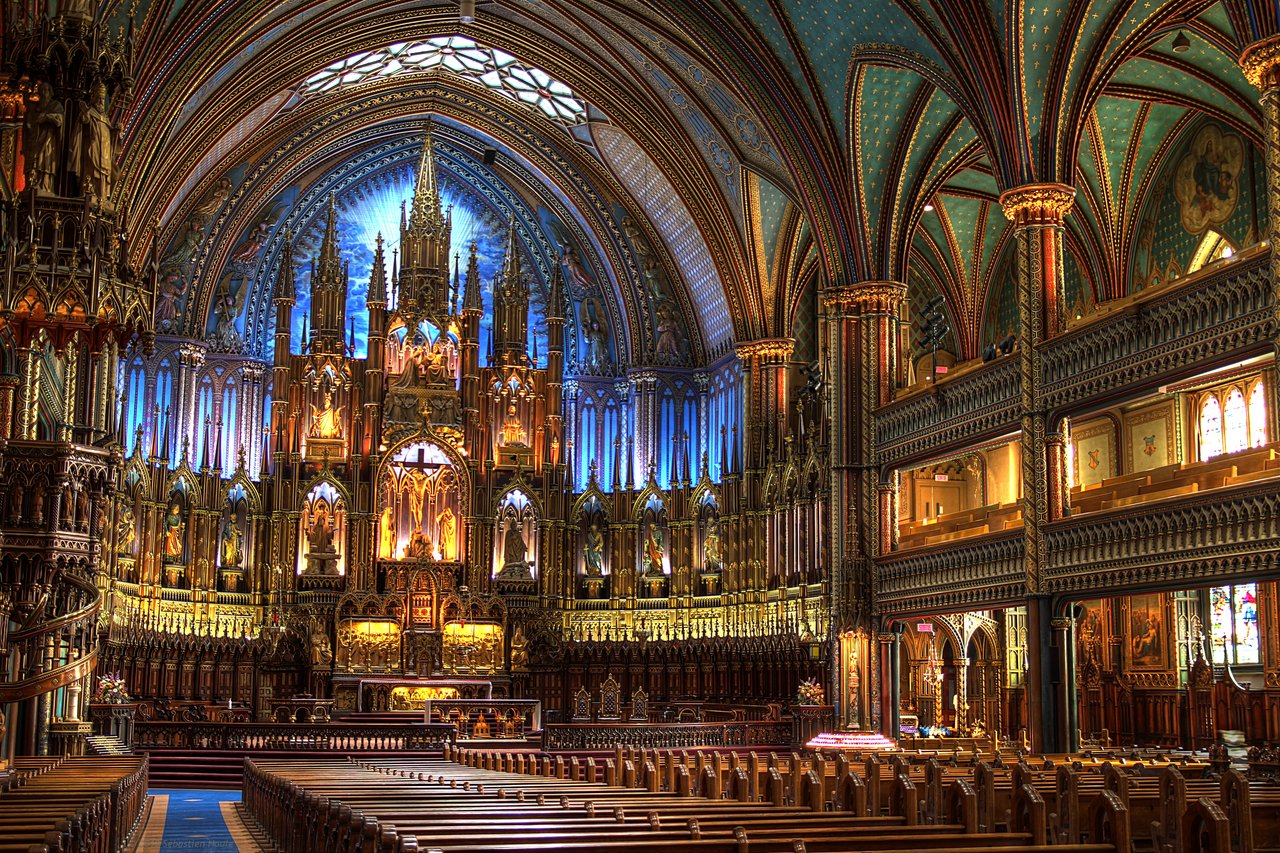 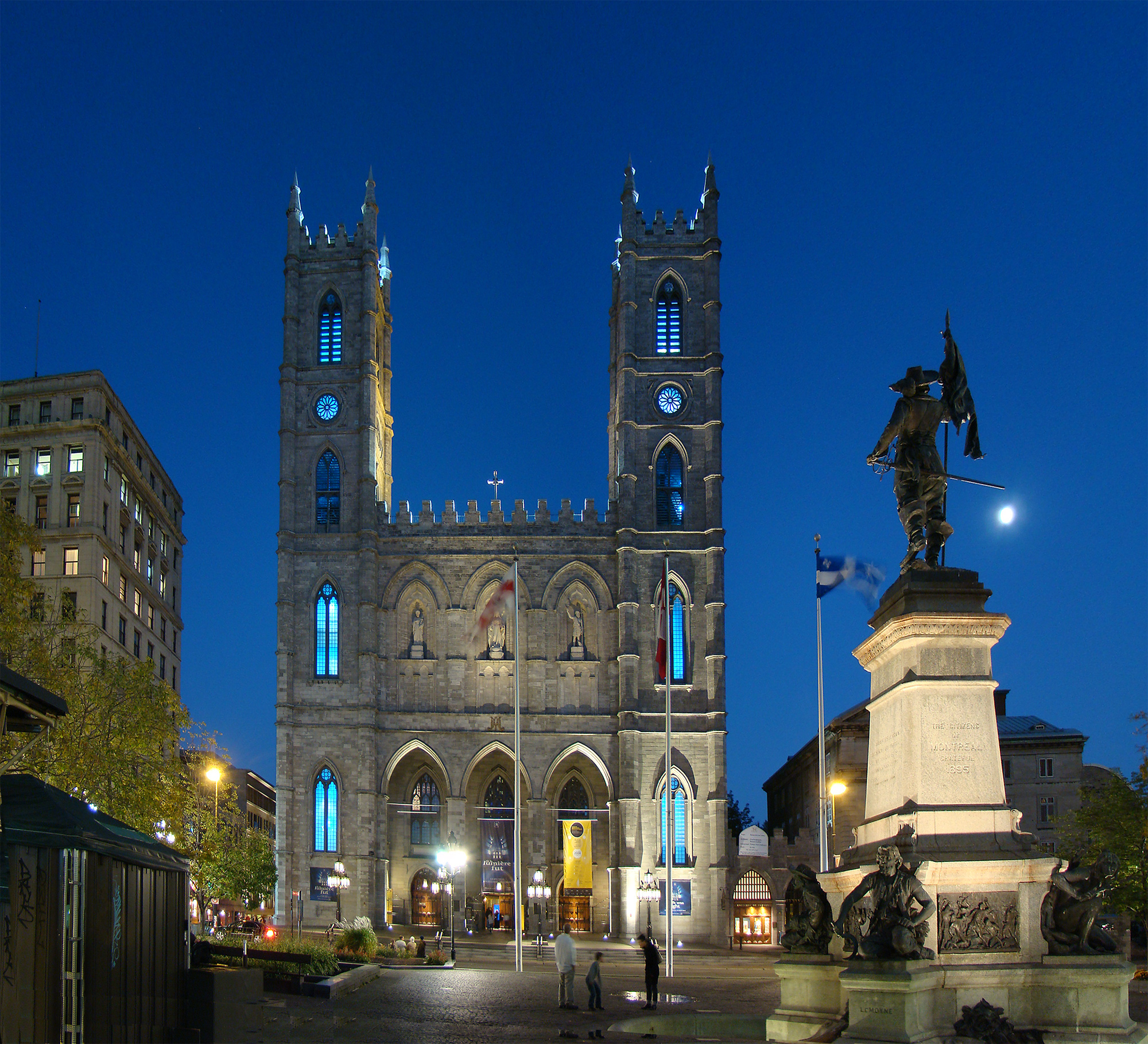 Dedicated to Our Lady the Blessed Virgin – “Notre Dame” – the small original chapel was operated at first by the Jesuits. Then came the Sulpician Fathers, who in 1657 undertook construction of a larger church. The Sulpician François Dollier de Casson was its architect, and the present-day Notre-Dame Street served as the original site. Its construction, in Baroque style was completed between 1672 and 1683. By 1800, Dollier’s church had become too small, and the Fabrique decided to build the church we know today. To design the new church, the building council engaged the services of the New York architect James O’Donnell – himself an Irish Protestant by origin. O’Donnell and the Fabrique opted for the Gothic Revival style then in vogue in England and the United States. The main construction work took place between 1824 and 1829. O’Donnell did not live to see his work completed. He died in Montreal in 1830. Just prior to his death, he had converted to Catholicism, and was buried in the new church’s crypt, where his grave is marked by a plaque. The old church set back from the road was demolished in the summer of 1830, except for its bell tower, which survived until 1843, when Notre-Dame Basilica’s twin towers were completed by the architect John Ostell. The western tower, nicknamed La Persévérance (Perseverance) and finished in 1841, houses the great bell christened “Jean-Baptiste,” weighing 11 tons (11,000 kilograms or 24,000 pounds). The eastern tower, nicknamed La Tempérance (Temperance), was completed in 1843 and houses a carillon of 10 bells. In 1889, Curé Léon-Alfred Sentenne commissioned the architects Perreault and Mesnard to build a chapel that would accommodate ceremonies for smaller congregations, such as marriages and funerals. Named the Chapel of Notre-Dame du Sacré-Cœur (Our Lady of the Sacred Heart) and consecrated on December 8, 1891, the date of the feast of the Immaculate Conception, it was built in Gothic Revival style with a wealth of sculptural motifs. Unfortunately, a fire seriously damaged the chapel on December 7, 1978. Reconstruction was undertaken by the architectural firm of Jodin, Lamarre, Pratte and Associates, whose plan suggested rebuilding the first two levels to be identical to the original chapel, with skilled carpenters, sculptors and woodworkers using traditional methods. The vault was built in a modern style allowing for natural lighting. The new chapel was opened in 1982. Stylistically, the church’s look indoors in its early years was very different from its present appearance. The wall at the end of the sanctuary lay flat and was lit by a large window, in the traditional manner of English Gothic churches. Six paintings taken from the old church were hung on this wall. For economy’s sake, the old church’s high altar was moved into the new sanctuary. This altar stands today on the west wall of the side chapel dedicated to Saint Marguerite d’Youville. In the nave, the columns were painted to give a realistic impression of veined marble. This work was executed by an Italian artist from New York, Angelo Pienovi. Between 1870 and 1900, the second phase of decoration of the church was the work of Curé Victor Rousselot and Victor Bourgeau, Quebec’s most active architect of that era. While travelling in France, Rousselot had been deeply impressed by the style and symbolism of the Sainte-Chapelle in Paris, which he proposed as a source of inspiration for Bourgeau. The blue and gold colours chosen, the gilded leaves in the vaulting and on the columns are especially reminiscent of the Sainte-Chapelle. This polychrome decoration consists entirely of sculpted wood.