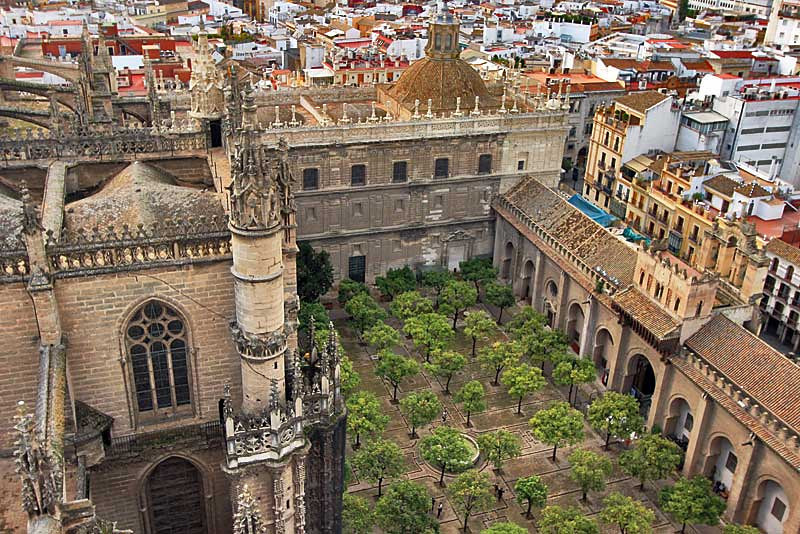 Construction of the cathedral started in the early fifteenth century at the site of a great mosque which was built by the Moors in the late twelfth century. The mosque had been damaged by an earthquake and in July 1401, the Chapter met and decided to replace the damaged mosque with a new, grand cathedral, according to tradition with the words 'We shall build such a large church that those who will see it finished will consider us crazy'. lready in 1248, shortly after the reconquest of the city by the Christians, the original mosque was consecrated as a cathedral. After the earthquake of 1356 much of the original mosque had collapsed but some parts survived, including the minaret, now the lower section of the cathedral's famous bell tower - the Giralda - and the Patio de los Naranjos, a large courtyard. Construction of the new church started in 1402 after a design by Alonso Martínez and the building was completed in 1517, however work on the interior continued until the early twentieth century. The cathedral is one of the world's largest. The interior is enormous and boasts five large naves. The building is 126 meters long and 83 meters wide (413 x 272 ft), with a ceiling height of up to 37 meters (121 ft). The interior of the cathedral is magnificent, with numerous chapels, a beautiful choir, remarkable vaulted ceilings and stained glass windows. Some of the most noteworthy chapels include the lavishly decorated Royal Chapel, the Chapel of St. Peter and the Chapel of St. Anthony, which contains some marvelous spanish paintings from the sixteenth century. The most famous sights in the cathedral are the dazzling gilded altarpiece and the tomb of Christopher Columbus. More tombs can be found in the crypt under the altar, where Castilian kings and queens from the thirteenth and fourteenth centuries were buried. The cathedral museum is housed in the main sacristy. Here you can find some of the most valuable paintings as well as the large silver ostensorium (the monstrance). The most spectacular part of the interior is undoubtedly the golden Retablo Mayor (main altarpiece) in the main chapel of the Seville Cathedral. This magnificent masterpiece was designed by the Flemish craftsman Pierre Dancart who worked for forty-four years on the reliefs, starting in 1482. The altarpiece was finally finished in 1564 with help from other artists. Large iron grilles, forged between 1518 and 1532, separate visitors from the altarpiece. The Retablo Mayor, the largest altarpiece in the world, consists of thirty-six gilded relief panels depicting scenes from the old testament and the lives of saints. At the altar in front of the wall of gold sits a statue of Santa Maria de la Sede, the patron saint of the Cathedral. Near the main entrance to the cathedral stands the large funeral monument to Christopher Columbus which supposedly contains the body of the famous explorer. His body was brought here from Havana at the end of the 1890s. The sarcophagus of Columbus is carried by four large statues, representing the kingdoms of Aragón, Castille, León and Navarra. The Patio de los Naranjos (Orange Tree Courtyard) was originally the courtyard of the former mosque. A large portal, the Puerta del Perdón (door of pardon), built in the twelfth century by the Moors, leads to the patio. At the center of the patio is a stone fountain which dates back to the Visigoth or possibly even the Roman era. The crowning piece of the Seville Cathedral is the famous Giralda Bell Tower. The tower, which today reaches a height of 98 meters (322 ft), was originally built at the end of the twelfth century as the minaret of the mosque. The tower escaped the earthquakes of the fourteenth century unscathed so it was decided to keep the tower and convert it into a bell tower for the cathedral; Christian symbols were added to the spire. A remodeling in 1568, when the magnificent Renaissance belfry was added, gave the tower its current appearance. A large number of impressive doors give access to the cathedral. The most famous of these is the Puerta de los Palos, near the Giralda Tower. It is decorated with a relief depicting the Adoration of the Magi, created by Miguel Florentín in 1520. Florentín also designed the relief over the Puerta de las Campanillas, showing Christ's entry intro Jerusalem. The Cathedral's main portal, the Puerta de la Asuncíon, is situated at the Avenida de la Constitution. Created in 1833, it is decorated with statues of saints and a relief above the door shows the Assumption of the Virgin.