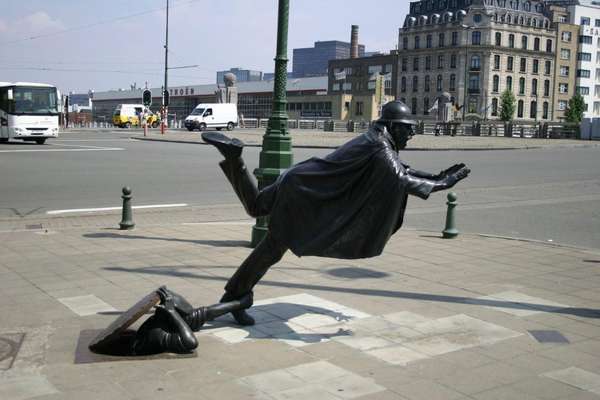 Working on an imposed subject, that of "De Vaartkapoen", which is the name given to the people who were born in Molenbeek (literally "de vaart" means "the canal" and "kapoen" means cheeky), Tom Frantzen stages a little scene on two levels: the level of the sewers (which lead into the canal) and the level of the pavement (see the lamppost, the cobblestones and the manhole cover). Low down, a young rebel, the Vaartkapoen, reminiscent of a jack-in-the-box, topples over a policeman higher up, thus overthrowing his authority. With this statue, the artist makes an implied reference to cartoonist Hergé (who is mostly famous for being the creator of Tintin, and shared the same "zwanze" as Frantzen) by changing the officer's roll number from 22 (22 being a pun, because of the French expression "vingt-deux, v'là les flics"= "watch out, here come the cops") to 15 ("Officer 15" was another of Hergé's famous characters). In a snapshot-like motion, the two characters gracefully turn into bronze and remain so forever, leaving the rest of the scene to our imagination... which is how the rebellious Brussels artist gets passers-by to share a joke with him.