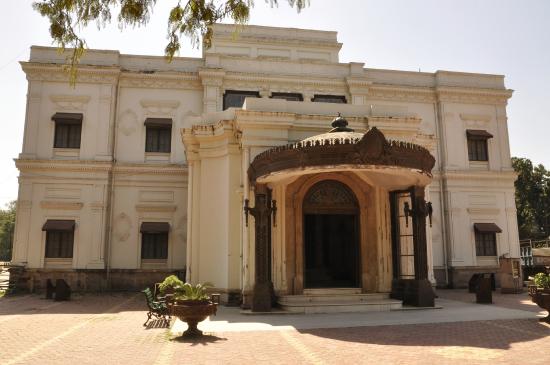 Lal Baag Palace is one of the most spectacular buildings in Indore. It stands on the outskirts of the town, towards the southwest. It is a three storey building on the bank of the River Khan. The palace was built by Maharaja Shivaji Rao Holkar during 1886-1921. Situated amidst dry and dusty gardens, it is architecturally quite similar to the New Palace. Lal Bagh Palace once hosted many royal receptions and even today, reflects the life style and taste of the Holkar Rulers. The construction of the palace began in 1886 under Tukoji Rao Holkar II. It was carried out in three phases and the final phase was completed in 1921 under Tukoji Rao Holkar III. Owing to its unique style of construction, it was one of the most stylish residences in India. The entrance hall on the ground floor is in marble and displays prehistoric artifacts. There is a coin collection on the first floor which dates back to the Muslim period. There are also exhibits like contemporary Indian and Italian paintings and sculptures. The interiors of the Lal Baag Palace transport the visitors to the historic era. Lavish decorations in the style of Versailles Palace, Italian marble columns, grand chandeliers, rich Persian carpets, flying nymphs on the ceiling, Belgium stained glass windows, Greek mythological reliefs, Italian style wall paintings, stuffed leopards and tigers gives the visitor an out of the world experience. The ballroom of the palace has wooden floor mounted on springs for extra bounce. The kitchen was built on the opposite bank of the river. It was connected to the palace by a well lighted underground tunnel. The gates of the Palace are a replica of the gates of Buckingham palace (London). Only, they are about twice their size. The gates were molded in cast iron and were shipped from England. They also carry the Holkar state emblem which states "He who tries will succeed". The daunting gates of the Lal Bagh Palace are unique in Asia. The rooms of the palace have now been restored and furnished and it has been turned into a museum. Much of the furniture and ornamentation seen there belongs to late Regency and early Georgian style. The main attractions of the palace are the accurately proportioned and furnished rooms, with beautiful carvings on the walls as well as the ceilings. The architecture and decoration of this Lal Baag Palace reflects the highly westernized outlook and aesthetic sensibility of the later Holkars. The Palace was inhabited by the Holkars till 1978. Tukojirao III was the last resident of this splendid palace. The Government of Madhya Pradesh is developing it as a cultural centre. The whole complex has a total area of 28 acres and boasts of one of the best rose gardens in the country. You can visit the Palace between 10:00 am and 05:00 pm on nominal charges everyday, except Monday. (indorecity.net)