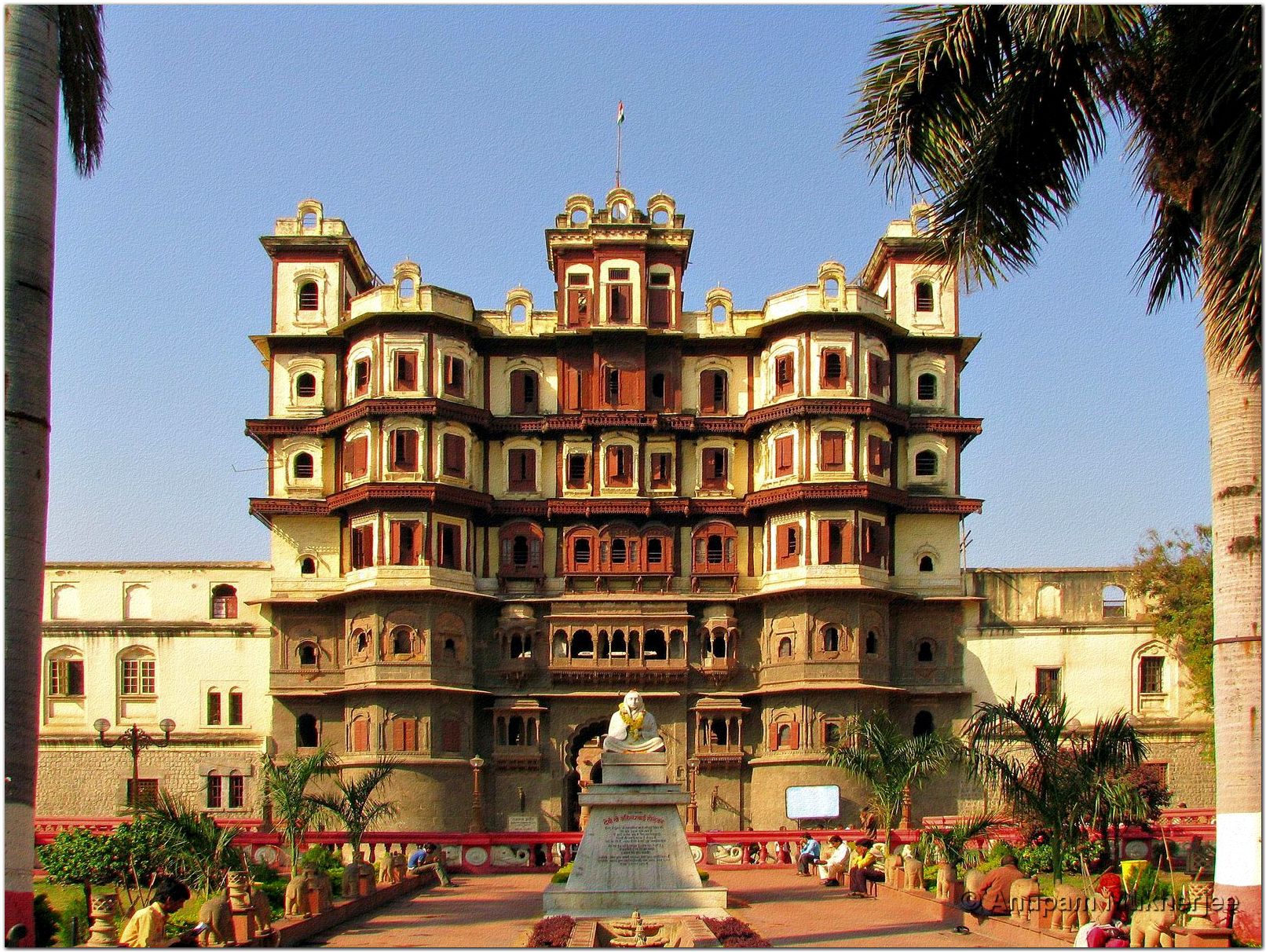 It was built in 1747 A.D. by founder of Holkar dynasty -Malhar Rao Holkar. In and around Indore city we will notice most of the historical monuments and marks are of Holkar dynasty as they ruled here for long duration and was the last dynasty before Britishers. Malhar Rao Holkar used Rajwada as his residence and stayed here till 1880 A.D. This remarkable mammoth 7 storied palace stands in the heart of the busiest part (Khajuri Bazaar) of the town. It is also close to the Chhatris. After independence Indore city expanded with development of new areas. Now a days it is considered as old Indore. Facing it is a garden with a statue of the great Queen Ahilya Bai. The face that enclose the gateway of the palace gives an impression of a rather forbidding wizard`s castle. This remarkable palace serves as an living example of the Grandeur of Holkars dynasty.The architecture of this building is a mixture of Maratha, Mugal and French style. If we observe its southern portion, we will notice the impression of Mughal architectural style where eastern part has European style. Darbar Hall, Rani Ahilya Throne and Ganesha Hall was developed in French style. The monuments made up of gopura stone and wood structure, balconies and windows studded with flanked bastions, arch-shaped entrance, wooden door with iron studs provides the testimony of the past grandeur of Holkars. The three lower stories are made up of stone and are painted in a dark brown format. The upper floor is made up of wood, which made it very vulnerable to be destruction by fire. In the history Rajwada was burnt 3 times and the fire that led in 1984 caused the most destruction and then it was converted into a garden. In 2006 the present Maharani of Indore H.H.Ushadevi Holkar decided to rebuilt the ford and bring back its past glory & prestige. Architects Himanshu Dudwadkar and Shreya bhargava were called to redesign this fort. In 2007 was completed and again attained his place in the history. It also became the first building in India which has been rebuilt with the same material, style and method that was been used in the previous time to construct the Rajwada palace.The three floors rising above them have their windows outline in white giving the impression of multiple eyes grazing down at one from a well-defended fortress. Its huge entrance archway made above the huge wooden doors coated with iron studs, leads into a vast court yard enclosed by the gallery rooms and arcaded Ganesh hall. It was the place where religious functions of the states were once held. Art exhibitions and classical music concerts take place here. While walking through the gates of the palace there are bright sunlit, quadrangles which are surrounded with beautiful galleries and delicate arches which are considered as very delicate arches with great elegance. As the in the palace Holkars has followed the example of there Queen Rani Ahilyabai the surrounding made here is very welcoming and been accessible to the humblest of there subject.