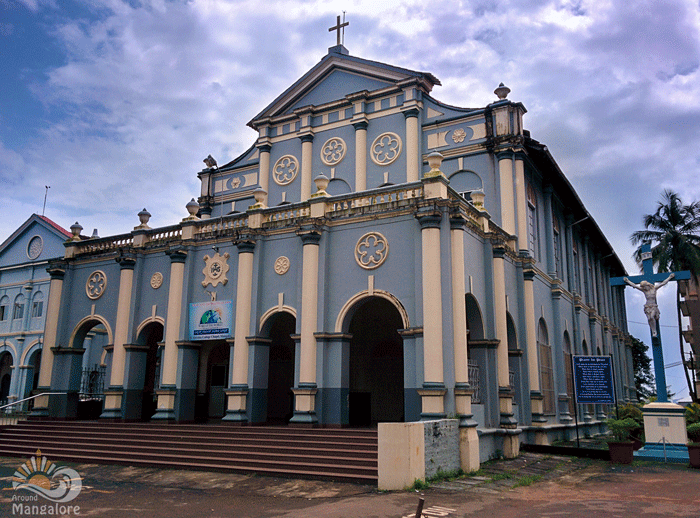 The Mangalore Mission started in 1878, and the chapel was built as part of the mission. Focusing on health, education, and social well-being of the Catholic Community of the city, the Italian Jesuits built St. Aloysius College in the year of 1880 and the chapel a few years later. The chapel is dedicated to a wealthy and successful young man, St. Aloysius Gonzaga. He gave up his worldly pleasures to serve the destitute. The chapel is an architectural wonder with a beautiful ceiling, fresco and oil paintings. The chapel stands head to head with the beautiful chapels of Rome, its walls and roof. Although many years old, these paintings are maintained, and restored regularly as they are historical artefacts. The paintings are the work and passion of a famous Italian Jesuit painter Antonio Moscheni. The pictures have been painstakingly worked upon to pay homage to St. Aloysius Gonzaga. Other paintings are dedicated to the Apostles, Jesus’ life, and various Church and Jesuits saints. Panel paintings The panel is dedicated entirely to Aloysius. He had everything that any man would desire at his age – power, wealth, and influence that he gave up for the betterment of the society. The first three panels show his early days. As a child, dedicate his life at the Altar of Mary in Florence. Preaching to his town people about God Seeking admission to the Jesuit order His first communion Ceiling paintings The rest of Aloysius life is depicted in the wall above the altar. The centre picture shows him serving the plague-stricken community in Rome, a disease he too contacted and led to his death at the age of 23. The sloping ceilings have paintings of the Apostles, with garlands weaving through multiple panels. The garlands are unique as the same flowers are not while making garlands. The angels holding the garlands are life size. The upper arches of the chapel display the saints of the Church whilst the lower arches are adorned with the following Jesuit saints: The Apostle of India, St. Thomas, with a spear in his hand The Patron of Environmentalists, St. Francis of Assisi The Apostles of the Afro-American race, St, Peter Claver. The picture is on the fourth left arch. The St. helped the slaves when they reached in Cartagena Rudolf Aquaviva, who had been held in high esteem when he visited the courts of Emperor Akbar. John De Britto, a scholar who studied Tamil, Sanskrit, and Indian customs. He was the first missionary to wear the sanyasi garb. The rear wall paintings The rear wall paintings show Jesus as the children’s friend and considered as the masterpiece of Moscheni. Other paintings that make up the life of Jesus include: The birth of Jesus on Christmas night John the Baptist, baptizing baby Jesus The Feast at Cana showing Jesus changing the water into wine The crucifixion of Christ.