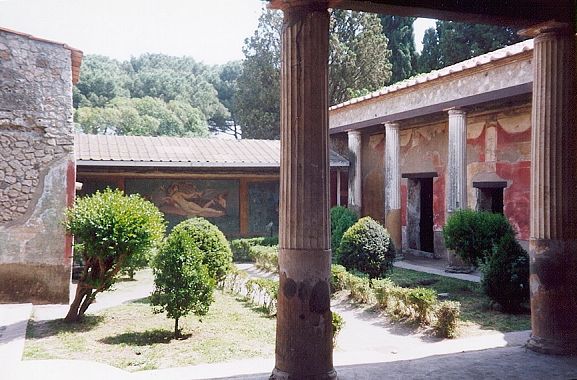 Damaged by one of the bombs that fell on Pompeii in 1943, and uncovered in 1952, this house seems to be built over an older one, with a larger peristyle and triclinium and new arrangement of the rooms, which go almost all the way around the garden. The house was made famous by the beautiful painting on the south wall: a lush garden, filled with flora and fauna, with a low transenna and other decorative elements spread across three panels. To the right is a fountain basin painted with birds, to the left a statue of Mars. A center window gives the illusion of opening onto the sea, where the goddess Venus lies with two cherubs in a pink seashell, practically thrust towards Pompeii, of whom she was protectress. Although clumsily painted, the composition is not lacking in dramatic effect if viewed from a certain distance. by Special Superintendency for the Archaeological Heritage of Naples and Pompeii (SANP)