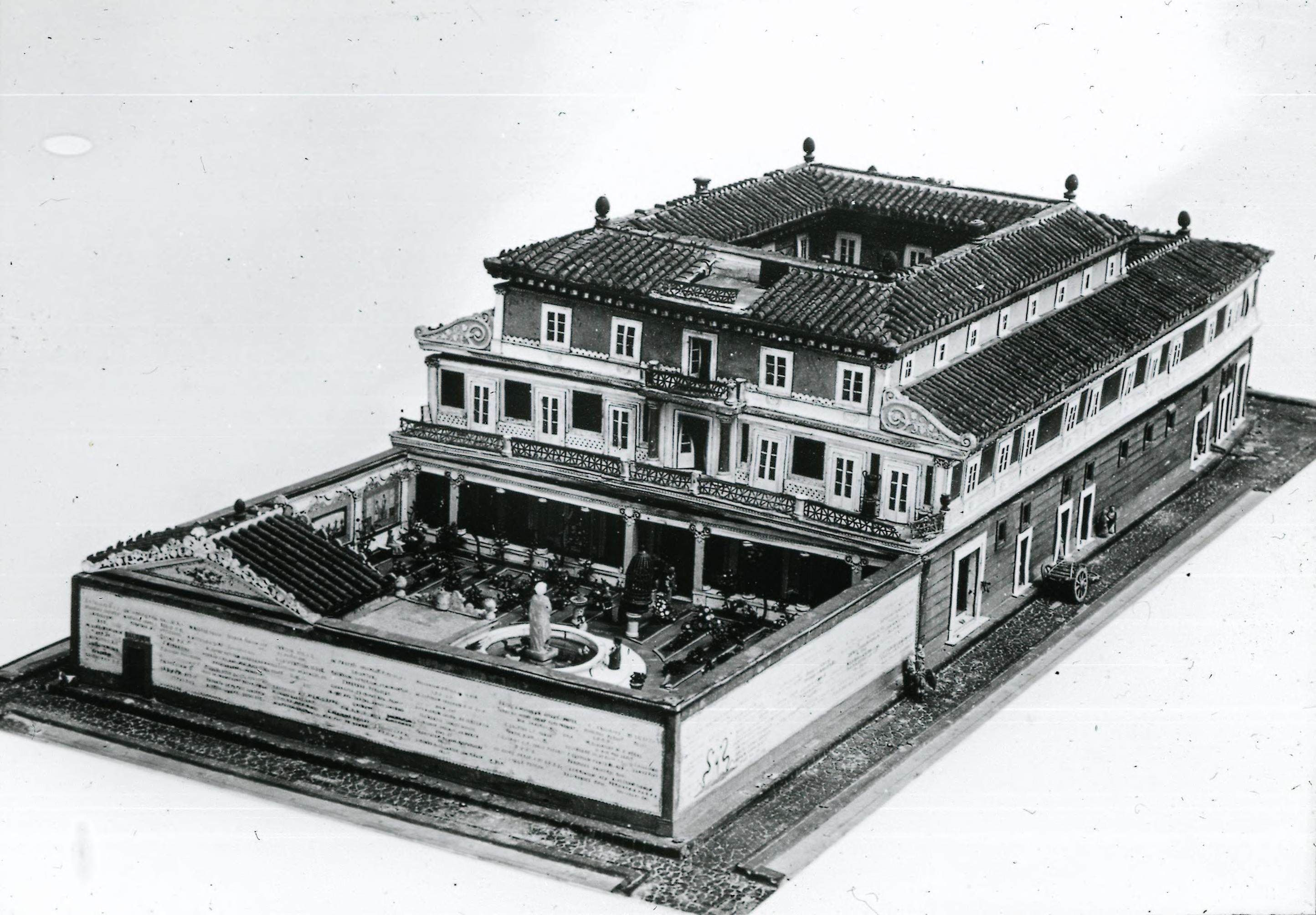 The Ionic capitals of the porticoed garden date the dwelling to 140-120 BC; it has an ‘atrium style’ layout, based on the entrance-atrium-tablinum axis, and occupies the entire block. Colored stones and brick fragments pave the sidewalk in front of the entrance and the vestibule. According to the notice painted in an adjacent alleyway, during the final days of Pompeii, the rich and powerful owner Cn. Alleius Nigidius Maius, a merchant originally from Campania and duumvir in 55-56 AD, rented out part of it. The fauces opens off the north side of the Via delle Terme. The walls of the fauces retain some areas of plasterwork but these are too weathered to allow any description of the original decoration. The fauces opens directly onto a large Tuscan style atrium with a central impluvium.the house is in a general state of disrepair with little in the way of remaining decoration. Opening off the atrium are six reasonably sized cubicula (c), three on the east side and three on the west side of the atrium (pictured right). The cubiculum off the south west corner of the atrium has a doorway in its south wall opening onto the shop (d) at VI.6.22. Opening off the north west corner of the atrium is an oecus. The room is in a ruinous state with little in the way of decoration. There is a wide window in its north wall overlooking the west side of the peristyle. In the centre of the north side of the atrium is the tablinum. The tablinum is open to the atrium over its full width. The east and west walls of the tablinum retain some patches of plasterwork, but any decorative detail has long since been lost. The tablinum has a fine white mosaic floor with a single black border. In the north wall of the tablinum is a wide opening with two low marble steps giving access to the peristyle. Immediately to the east of the tablinum is an andron which connects the atrium with the peristyle to the north. The peristyle had sixteen Ionic columns supporting the inner margins of the roof. The columns are of tufa, stuccoed in the lower part and fluted above. The circular lower portion was painted yellow while the upper part was painted white.In the middle of the peristyle is a small garden with a basin originally decorated with images of water plants and fish on a blue ground. The basin featured a small fountain in its centre. Several rooms open off the east and west sides of the peristyle including, on the eastern side, a triclinium and an oecus which had direct access to the street at No.8. The house had an upper storey, but the access stairways are in the rented area, suggesting that the upper floor was not occupied by the owners of the main property. The kitchen is located off the north west corner of the peristyle, and includes a paved yard with access to the street at No.13. In the kitchen the masonry hearth was against the east wall.In the north east corner of the kitchen is an arched niche. Next to it was an elaborately painted lararium, but sadly this has now been lost due to its exposure to the elements. Adjoining the kitchen to the west is a second service area which contained the latrine.In the centre of the north side of the peristyle is a large exedra. The exedra was open to the peristyle over virtually its full width. On its north wall is an almost equally large window which overlooked a veranda and the garden to the north. Access to the veranda was gained by way of the corridor between the exedra and the kitchen. The owner of the property at the time of the eruption, as a for-rent sign informs us, was a the above mentioned Gnaeus Aleius Nigidius Maius.