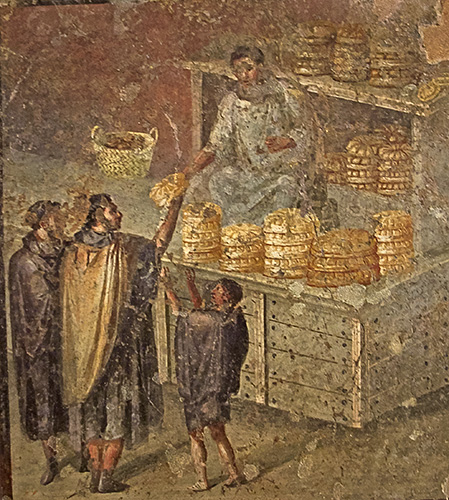 House of the baker... - Secret World

This dates from the 2nd cent. BC, but the remodelling after the 62 AD earthquake converted the ground floor of the house into workrooms, while the residential function moved to the top floor, reached by the stairs to the right of the atrium entrance: it appears that work was not yet complete at the time of the eruption (79 AD). For a long time this was the only large bakery brought to light in Pompeii, among the 35 now known. The hortus (garden) contained the machinery for grinding wheat and for preparing and baking bread: the water basins, the vaulted oven, four millstones of lava rock on a base in opus incertum. In the open room on the right, two stone blocks supported the table on which the bread rested before baking, while the room to the left of the tablinum was the kitchen. The feed bin was against the wall of the stalls, which open onto the garden and Vico di Modesto: here it seems that a fully harnessed mule skeleton was found.