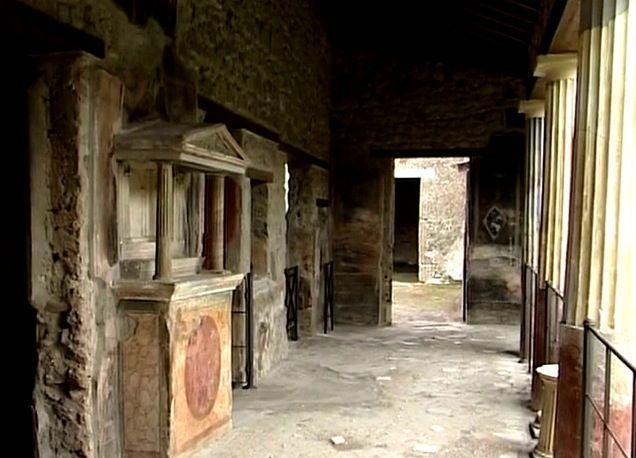 House of the Amorini Dorati

The name is due to the cherubs on gold laminate (at the Naples Museum) that decorated one room: graffiti reveal the owner to be Cn. Poppaeus Habitus, related to Poppea Sabina, Nero's second wife. The building (3rd cent. BC, variously remodeled through the 1st cent. AD) is organized around the peristyle with garden, onto which the rooms open. Mythological subjects and landscapes in the ‘third style’ decorate the walls of the public sitting room: a black and white mosaic rosette decorates the floor, in a style fashionable in the Augustan period. The garden was decorated with marble reliefs and sculptures reminiscent of the natural and Dionysian world, occasionally used as fountain jets according to taste, imitating the look of country residences. In addition to the masonry lararium (aedicula) for traditional worship, the peristyle also contains a painted one depicting Egyptian divinities: Anubis, with the head of a jackal, god of the dead; Arpocrates, child god, son of Isis and Osiris; Isis and Serapides, the healing god. Alongside are objects from the cult of Isis, guarded by the sacred cobra (uraeus), with the agathodemoni snakes at the bottom, favorable idols.