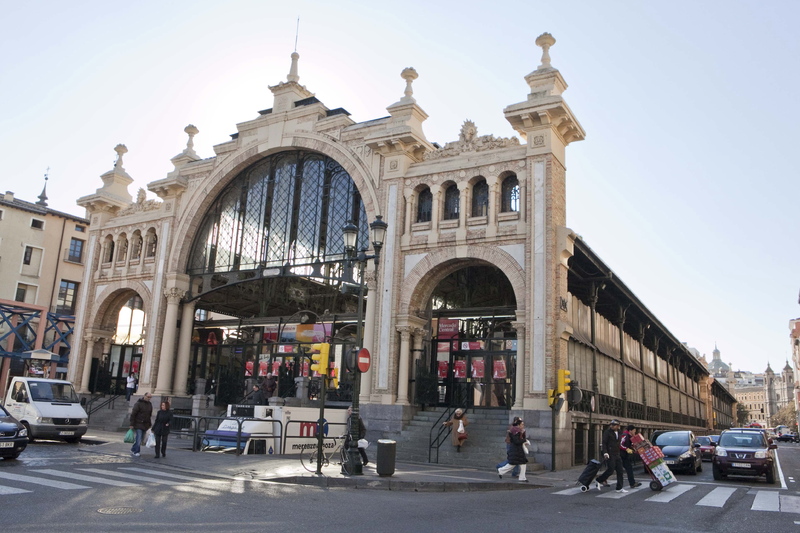 Mercardo de Lanuza, popularly known as Mercado Central, is situated next to the Roman Walls in an emblematic place. It is the most famous market in Saragossa. In fact, it is particularly bustling in the mornings on the weekdays when visitors and citizens can enjoy the atmosphere of a real working market buying the best freshest and healthiest food. As for the building, it was constructed between 1900 and 1903 in Modernist architecture by the renowned architect Felix Navarro Pérez ( 1849 – 1911). The land occupied by the market is rectangular in plan and its measurements are 130 meters in length by 26 meters in width with three naves. The two-storey market was built on the site of the Lanuza square (Plaza de Lanuza the main square) which had been used for traditional markets, bullfightings, jousts, tournaments and other events since 1210. It was a place in which great historic events had taken place, such as the public execution of the Ombudsman Juan de Lanuza V on 20th Diciembre 1591 by order of the Felipe II king of Spain. As for Juan de Lanuza ( 1564 – 1591), he suffered the great injustice of being punished for being the Justice of Aragón and his death was mourned by all the Aragoneses who play tribute to Juan de Lanuza every year. His remains are in Santa Isabel de Portugal’s church.