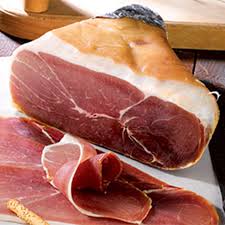 Since antiquity Spaniards have produced dry-cured hams. The first written references date back to the Roman Empire. From the very beginning, production of this type of ham has been uncomplicated - taking what nature provides in order to preserve and enrich pork: nothing more complex than sea salt, the correct environmental conditions and time. Historically speaking, fresh ham was cured in mountainous areas with moderate climates that are warm and dry in the summer and cold in the winter. Mountain, or “sierra” (serrano), air favored gradual aging of the meat. This was aided by a preliminary application of sea salt. Ham processing started during the first weeks of November, at the start of the winter. For centuries families sacrificed and butchered the pigs that they had bred and fattened domestically. This ritual is called the “matanza”; an occasion for a celebration in which all family members participated. Note that the Spanish word for "to slaughter" is sacificar – “to sacrifice” – reflecting quite a different concept of respect for the animal than the English word slaughter suggests. The hams were initially covered in sea salt to begin the curing process. After several days, the hams were washed and then hung in curing sheds with sufficient ventilation. There the hams receive the mountain air, whose qualities vary as the seasons change. After about a year this process yielded dry cured Serrano hams that were sufficiently cured for consumption, without any kind of additive or additional handling. What has changed nowadays? Originally the only hams in Spain were made using the indigenous Ibérico pig. In the last century most curing houses began using Duroc or Landrace pigs, animals that reproduce much more quickly and are accustomed to modern farming practices. Now all Serrano hams are made using modern breeds of pork. How they are cured has changed as well. Nowadays, Serrano ham is produced by replicating the traditional methods with modern technology that systematically ensures high hygiene and quality. The goal is to create a jamón with a higher standard of quality, uniformity and safety. For this reason it is no longer common to see Serrano hams cured by mountain air in natural curing sheds. There still remain production plants and curing sheds in areas close to the Spanish mountains, but there are also controlled curing sheds located any almost any part of Spain, because technology allows climate conditions to be reproduced in any location. When one encloses curing sheds or installs semi-natural ventilation systems the result is a condition for more stable and safe production. It is no longer necessary to be at the mercy of unforeseen climate changes or the whims of Mother Nature. The Serrano ham production process includes three phases: Salting The fresh ham is covered with sea salt, which remains on the ham approximately 20 hours to two days per kilo of ham. In a curing area with a high degree of humidity, the pure salt stabilizes the product at a low temperature. Rest or Post-salting The hams are rinsed and the salt slowly and progressively diffuses through the meat, gradually equalizing throughout the ham. Dry Curing The fresh meat is hung in rooms that mimic the change of seasons, from the cold, moist air of winter to the dry heat of summer. As the fat melts away and chemical changes occur, the simple pork transforms into a beautifully cured ham. How do you recognize a high quality Spanish Serrano ham? The way to recognize a Serrano ham is that it bears the label of the Consorcio del Jamón Serrano Español with an individual control number. The “S” in the shape of a ham branded as a seal on the ham is the guarantee that the Serrano ham has passed the rigorous standards of the Consorcio. In 1990 the Consorcio del Jamón Serrano Español was established to bring together Spain’s principal producers/exporters of Serrano ham. They all have the same objective: to guarantee the quality of Spanish Serrano ham and to offer a high quality product for export. What is it that a ham must have in order to earn the quality seal of the Consorcio del Jamón Serrano Español? Inspectors of the Consorcio ensure that the private standards of the Association are properly applied. These established standards consider various points, thereby characterizing the ham as follows: Production in Spain Average 12 months air dry cured (minimum 252 days) Minimum fat cover of 1 cm. Must have a 34% minimum decrease from its fresh weight Each piece must pass individual sensory inspection It must be produced by firms that pass the quality audits that are periodically performed by the Consorcio The Consorcio authorizes various presentations of the final product which include the whole jamón with the hoof, whole without the hoof, boneless or sliced. If the hams pass all the controls, the seal of the Consorcio is branded on the ham, and a numbered control label is attached. The group monitors final minimum weights (6.3 kg. or 6.1 kg.); the absence of inappropriate aromas or flavors; the proper texture; and the appropriate levels of salt and dryness. Throughout the various processing phases of deboning, slicing and packaging, the Consorcio ensures that all established standards of hygiene, temperature and humidity conditions are respected