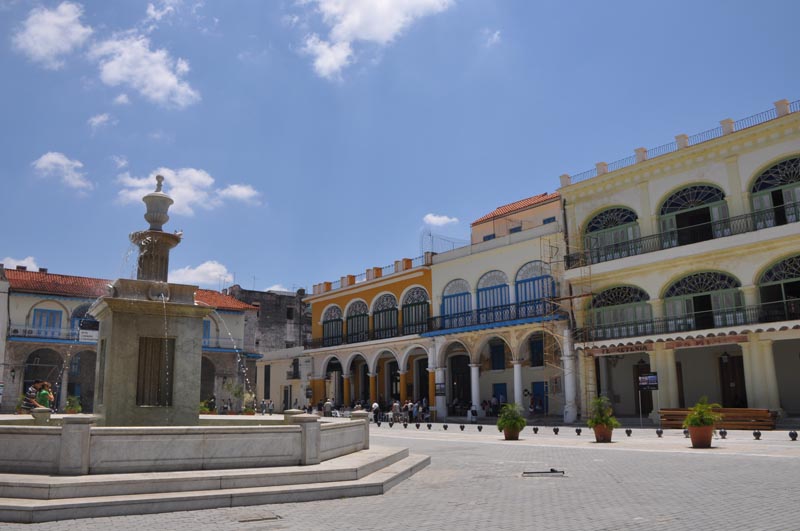 The 16th-century Plaza Vieja has always been a residential rather than a military, religious or administrative space, and is surrounded by elegant colonial residences, combined with a few very striking early 20th-century art nouveau buildings. Over the past 150 years, Plaza Vieja has played host to an open-air food market, a park, an outrageously misjudged car park built by Batista in 1952 (now demolished) and an amphitheatre. However, restoration is gradually re-establishing Plaza Vieja’s original atmosphere; the Carrara showpiece fountain at the center of the square is a replica of the original 18th-century one by Italian sculptor Giorgio Massari that was destroyed by the construction of the car park; and many of the 18th-century residences around the square are now restored with housing on the top floors and commercial establishments, including several small museums and art/photo galleries, on the ground floor.This was the first planned attempt to expand the city in response to Havana’s growth. This was Havana’s third open space after Plaza de Armas and Plaza de San Francisco. It is said that Franciscan monks requested that a new square be constructed where local vendors could carry out their business activities away from the Plaza de San Francisco, where they were hindering the celebration of masses. The new square was completed in 1559 approximately one hundred meters from the convent. It was called precisely Plaza Nueva (Spanish for New Square) and gained in popularity right away. Some authors claim, however, that in fact this was the second square to be built in Havana, before the Plaza de San Francisco.In the 18th century the Plaza Nueva was transformed into a market place. And in 1814, with the emergence of the market at the Plaza del Cristo, it was renamed to Plaza Real, Plaza Mayor, Plaza Fernando VII, Parque Juan Bruno Zayas and Parque Julián Grimau, until it finally received the name of Plaza Vieja (literally, Old Square).During the 17th to the early 20th centuries, the area was developed with residential, commercial and recreational buildings that fortunately maintained coherence, including the majestic Palacio de los Condes de Jaruco and the first exclusive recreational society in Havana, Sociedad Filarmónica, housed in a residence at San Ignacio 352-354. Curiously enough, no religious or military constructions were ever built around the square.In 1908 the old market was demolished to make room for a park which was regrettably transformed into an underground parking garage in 1952. In the 1980s, when Old Havana was listed by UNESCO as a Cultural Heritage site, architects and restorers began to work to save the Plaza Vieja. The underground parking garage was torn down and a replica of the original fountain was placed in the center of the square. The buildings surrounding the square were renovated, too.