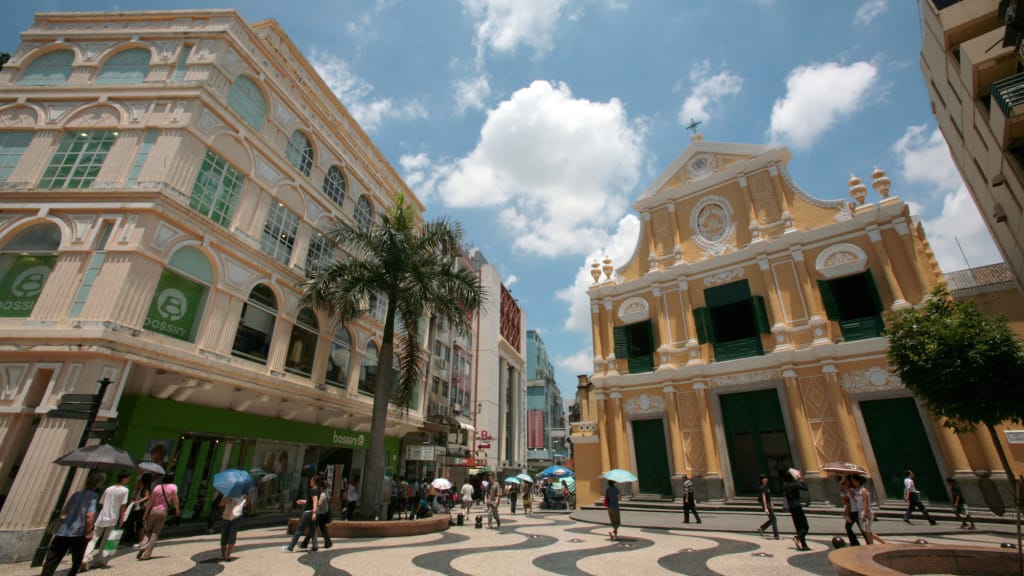 Located right in the heart of Senado Square of Macau, St. Domingo's Church, also St. Dominic's Church, was constructed by three Spanish Dominican priests in 1587 for worshiping Our Lady of the Rosary. It was refurbished in 1828 and was expanded to the large scale that it represents today. This church was placed on the World Heritage List in July 2005, and as such also became the 31st world heritage site of China. The church has three halls: the deep and wide main hall is separated from the body of the church by a solid brick-built arch. Its chapiter is divided into three layers from upper to lower and each layer is partitioned from door and window by columns of different styles. The top of the church is composed of triangular fins. This is Baroque style of seventeenth century churches which was influenced by both Portuguese and Spanish styles. The ceiling inside is covered with decorative patterns amongst which a crown pattern is significant just above the main altar which is decorated with white plaster reliefs and corkscrew pillars. In the main altar stands the statue of “The Madonna Holding the Infant Christ”. The statue of Lady Fatima stands in the shrine, which has been approved to be displayed and worshiped in the church by the Diocesano de Macau since 1929. The Festival of Lady Fatima's statue traveling the streets starts from this church on May 13th every year. Inside of St. Domingo's Church Inside of St. Domingo's Church As the only remaining part of the old church, the sacristy on the right side has nearly 300 pieces of religious artworks. A wide range of valued collections can be found here, such as golden, silver or cupreous utensils used for Mass; vivid icons made of wood, plaster or ivory; exquisite painting and paintings related to the Bible; color printing patterns and the gorgeous silk vestments used by the priests. Among these, a painting named 'St. Agustin' has a long history of over 300 years. Viewers can know about the phylogeny of Catholicism in Asia through these precious relics. At the end of the top floor of the sacristy, there are two bronze bells which are the oldest bell in the city. The church also has many interesting paintings and statues, amongst which the statue of Jesus Christ is the most famous. From this visitors will have a better understanding about the features of ancient Portuguese religions and associated arts. St. Domingo's Church annually becomes one of the performing grounds of the annual 'Macau International Music Festival'. Now, most of the concerts are held at this church which is usually open in the afternoon. Visitors can first press the doorbell and then enter it through the east side door. Then passing across a long aisle, you will come into the interior of the church. Behind the main church building, there is a small museum containing famous marbles and legacies from St. Paul's Cathedral.