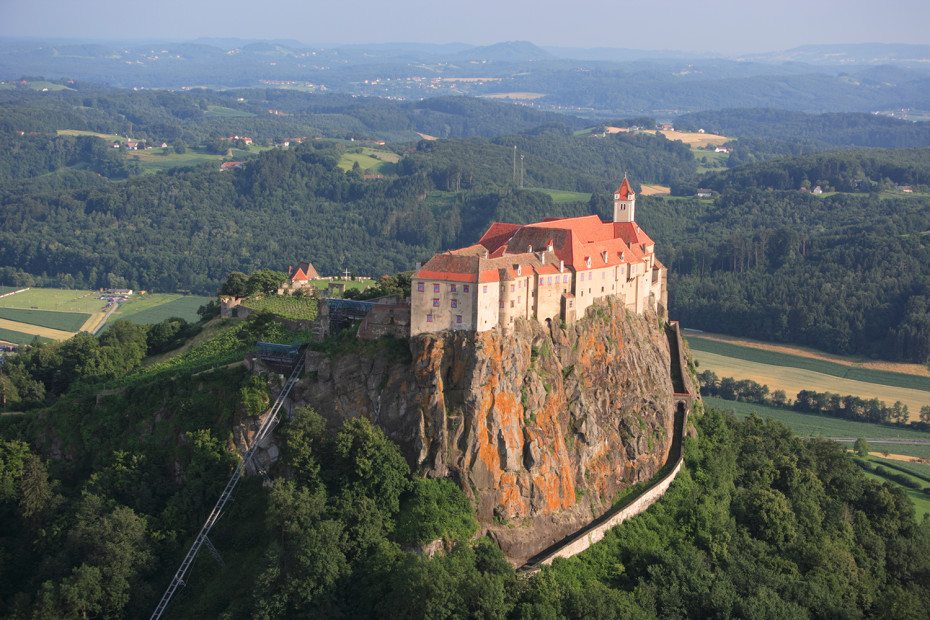 Riegersburg Castle is a medieval castle situated on a dormant volcano above the town of Riegersburg. The castle is owned by the Princely Family of Liechtenstein and contains a museum with changing exhibitions. The castle was built on a hill which had once been an ancient volcano. To be precise, it is the petrified remains of the solidified molten interior, a volcanic neck of a large stratovolcano that probably became extinct two or so million years ago, like other similar hills in north-central Europe. The peak is at 482 meters above sea level. The ancient basalt of the hill was used to build the castle. People have been living in the area around Riegersburg for a few thousand years. A large village was founded in the 9th century BC. With 300 people living here. Later, from 15 BC. Until 476 AD. The most important owner was the baroness Katharina Elisabeth von Wechsler, who married Galler and who was known as Gallerin. Between 1637 and 1653 she finished the castle, making it one of the biggest and strongest castles in the country. The castle is surrounded by 2 miles of walls with 5 gates and 2 trenches and it contains 108 rooms. In the 17th century the border with the Ottoman Empire was sometimes only 20 to 25 km away from the castle and the area was troubled by conflicts with the Turks and Hungarians. The castle is owned by the Princely Family of Liechtenstein, who live down the village in a house. The castle serves as a museum.