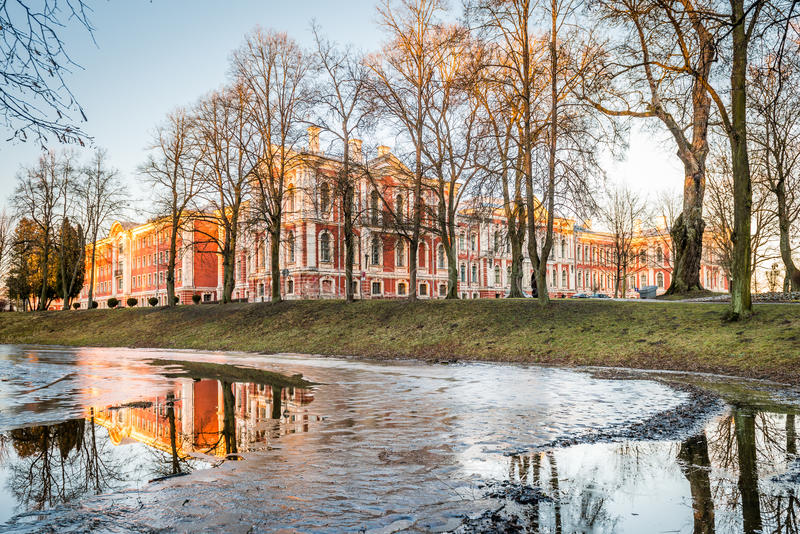 Jelgava or Mitava Palace is the largest Baroque style palace in the Baltic states. It was built in the 18th century based on the design of Bartolomeo Rastrelli as a residence for the Dukes of Courland in their capital - Mitava (today Jelgava). The palace was founded by Ernst Johann von Biron in 1738 on an island between the Lielupe river and its branches. The site had borne the residence of the former Courland dukes of the Kettler dynasty and, before that, a medieval castle belonging to the Teutonic Knights. Following Biron's fall from grace in 1740, all construction work was stopped, even though the roof of the palace had not yet been completed. Work resumed after Biron's return from exile in 1763. Besides Rastrelli (who, with the death of his patronness, the Empress Elizabeth, lost business in Saint Petersburg), Danish architect Severin Jensen participated in the project, giving the palace a touch of classicism. After construction was completed in 1772, the duke lived in the palace for a six months. In 1779, his successor, Peter von Biron, hosted the famous adventurer Alessandro Cagliostro in the palace. After Courland was absorbed by the Russian Empire in 1795, the palace served as a refuge for French royalty fleeing the French revolution. Louis XVIII of France and his family lived in the palace between 1797 and 1801. It was here that Marie-Thérèse-Charlotte of France married Louis-Antoine, Duke of Angoulême, in 1799. The interior decorations of the palace were destroyed in 1918 when it was looted and burned by retreating White forces under the command of Pavel Bermondt-Avalov. The palace also suffered heavy damage in World War II, during battles in the summer of 1944. The exterior of the palace was restored between 1956 and 1964, but not the interior. The Latvia University of Agriculture has been housed in the palace since the Soviet period. Jelgava Palace is not considered one of Rastrelli's better works. Critics note the dull facade design lacking rhythmic diversity and plastic richness which characterized Rastrelli works in the Elizabeth's period. Also, atypically for Rastrelli, the palace does not feature a park; nor is the parade yard closed, rather it faces the urban panorama. Originally, the palace consisted of two wings connected to the main building forming a U-shape. In 1937 a fourth building was added effectively closing the perimeter. Features of special historical significance include the burial vault of the Dukes of Courland in the south-east basement. All Dukes of Courland from the Houses of Kettler and Biron were buried there between 1569 to 1791. The rooms contain 21 sarcophagi and nine wooden coffins. The crypt was relocated to the palace in 1819. References: Wikipedia