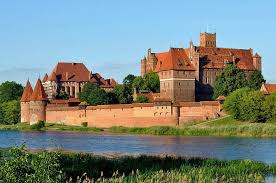 The precise construction date of the first Kaunas Castle is unknown. Archeological data suggests that a stone castle was built on the site during the middle of the 14th century. Situated on an elevated bank near the river junction it served as a strategic outpost and guarded nearby cities as well as trade routes. A written account states that in 1361, the Grand Master of the Teutonic Knights Winrich von Kniprode issued an order to gather information about the castle, specifically the thickness of its walls, as preparation for an assault on the castle. During 1362, Kaunas Castle underwent a siege by the Teutonic Order. The siege of the castle lasted three weeks. During this attack, the Teutonic Knights constructed a siege tower and erected wall-penetration machinery; primitive fire arms might have been used, since gunpowder technology was emerging in Europe. At that time, the castle walls were over 11 meters high, when its firing galleries are factored in. According to Wigand of Marburg, the castle's garrison consisted of about 400 Lithuanian soldiers, commanded by K?stutis's son Vaidotas. After three weeks, the Knights managed to breach the castle’s walls, and soon afterwards the castle was taken. On Easter Sunday in 1362, the knights conducted a Mass at the castle to commemorate their victory. K?stutis soon regained and rebuilt Kaunas Castle, but it remained a point of contention between Lithuanians and Teutonic Knights for many years. In 1384 Kaunas Castle was re-captured by the Teutonic Knights. At this time Grand Master Konrad Zöllner von Rotenstein began reconstruction of Kaunas Castle and renamed it Marienwerder. The presence of the Knights in Kaunas meant that the entire defensive system of castles along the Nemunas was threatened. Confronting this situation, the Lithuanians launched an attack on the castle later the same year. It seems likely that the Lithuanians mustered an army near Vilnius as a strategic maneuver, since Lithuanians could use the downstream flow of the Neris River to transport artillery and military provisions from Vilnius; the Knights were forced to use overland or upstream transport. During the 1384 assault, the Lithuanians deployed cannons and trebuchets; the besieged Teutonic Knights had also installed cannons in the castle, which apparently destroyed the Lithuanians' trebuchet. Nevertheless, the castle was retaken by the Lithuanians. After 1398, the Teutonic Knights were no longer able to reconquer the castle. After the Battle of Grunwald, Kaunas Castle lost its strategic military importance and was used as a residence. The castle served administrative purposes after the death of Vytautas the Great. Sigismund Augustus gave this castle to his wife Barbara Radziwill in 1549. During the 16th century, the castle was strengthened and adapted to new defensive purposes by the construction of an artillery bastion near the round tower. The diameter of the bastion was about 40 meters and the height of the bastion's walls was about 12 meters. In 1601, Kaunas Castle housed courts and an archive. At some time in 1611, part of the castle was flooded by the Neris River. Due to its convenient location, it was used by the Swedish military during its war with the Polish-Lithuanian Commonwealth, after which its military functions ceased. In the mid-17th century, large portions of the castle were again flooded. The castle was used as a prison in the 18th century; later the Russian administration granted permission for houses to be built in the castle's territory, which resulted in significant damage to the castle itself. For many years afterwards, Kaunas Castle stood abandoned. In the 1960s the round tower was opened as a museum, but due to the tower's structural deterioration, the museum was transferred elsewhere. Today the round tower of Kaunas Castle houses an art gallery. The castle is open to tourism, and hosts occasional festivals. Major reconstruction work started in 2010. References:Wikipedia