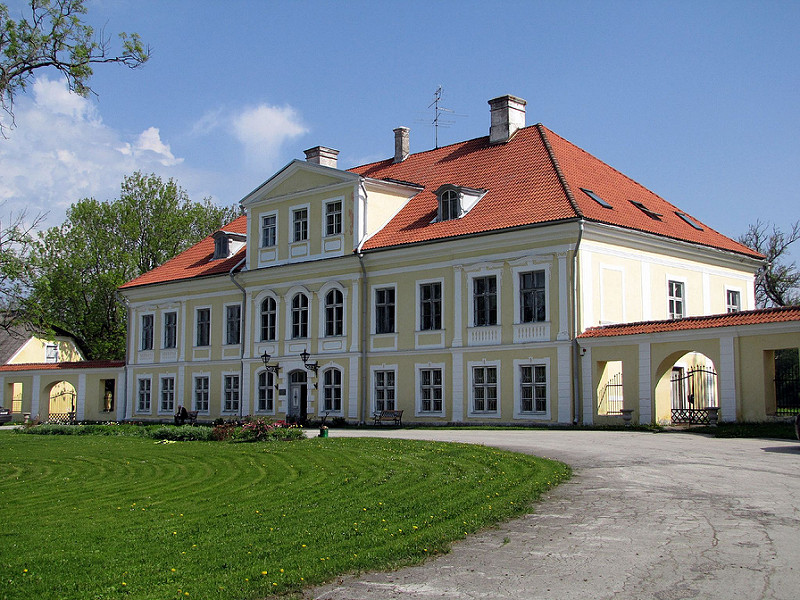 The beautiful Saue Manor complex is one of the best examples of Estonian early classicistic architecture. The first known owner of Saue Manor was Remmert von Scharenberg from Westfaal, who received right of investiture from queen Margaret of Denmark. Before moving to Saue the would-be manor owner was the bailiff of Narva in 1528 - 1532, and hold a position in Tallinn commandery in the years 1534 - 1549. Apart from his property in the country, he also owned several houses in the town of Tallinn. He was buried in St. Nicholas' (Niguliste) Church in 1549. The manor was acquired by Friedrich von Fersen in 1774. The present manor house together with the barn and the coach house arched round its front square were finished in 1792. Because of a mortgage deed in 1792 von Fersen was forced to relinquish the possession of the manor to the owner of Saku Manor, prince Friedrich von Rehnbinder and his wife princess Gertrud. The new owners moved in and in 1794 their second son was born in Saue, as well their next children. Even when the children had a new St. Petersburg style main building constructed in Saku, the old couple preferred to stay in Saue. After the Independence War in 1918 when the Straelborns left for Germany and sold the manor to the Republic of Estonia. The republic gave it together with 50 hectares of land to a hero of the Independence war, Johannes Erm. Regrettably, his life was a short one and from 1925 the manor was left to his wife and family. During the Russian occupation the manor changed occupants several times. It functioned as a home for aged people, a hospital for the chronically diseased, a machine and tractor station, the office of Estonian Agricultural Machinery, a kindergarten, the Saue city council and the office and production rooms of a firm SAUREM, belonging to the Saue city council. In 1995 the manor was returned to a daughter of Johannes Erm, Missis Elga Viilup, who in turn sold it to the Kriisa family.