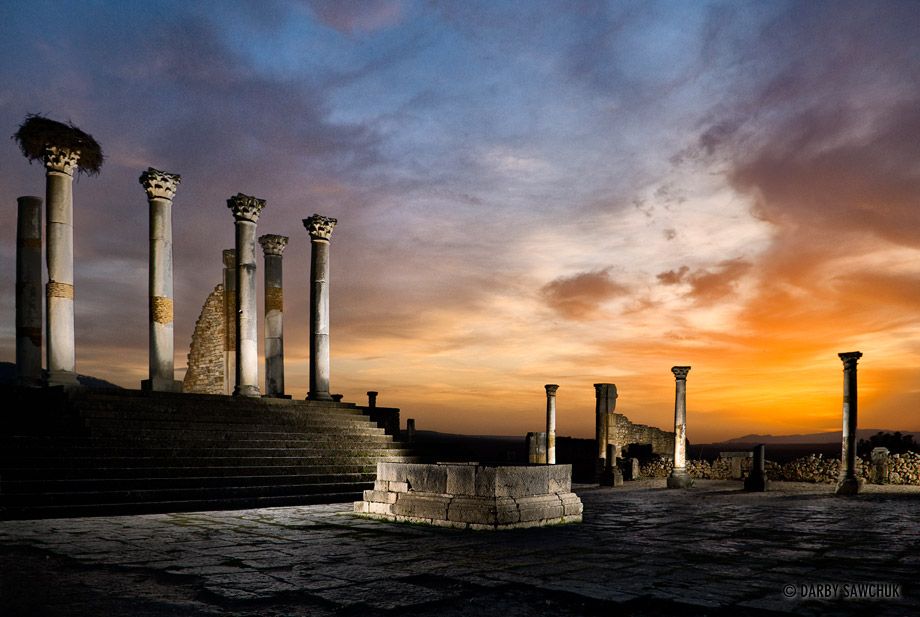 Archaeological Site of Volubilis The Mauritanian capital, founded in the 3rd century B.C., became an important outpost of the Roman Empire and was graced with many fine buildings. Extensive remains of these survive in the archaeological site, located in a fertile agricultural area. Volubilis was later briefly to become the capital of Idris I, founder of the Idrisid dynasty, who is buried at nearby Moulay Idris.Outstanding Universal Value Brief synthesis Volubilis contains essentially Roman vestiges of a fortified municipium built on a commanding site at the foot of the Jebel Zerhoun. Covering an area of 42 hectares, it is of outstanding importance demonstrating urban development and Romanisation at the frontiers of the Roman Empire and the graphic illustration of the interface between the Roman and indigenous cultures. Because of its isolation and the fact that it had not been occupied for nearly a thousand years, it presents an important level of authenticity. It is one of the richest sites of this period in North Africa, not only for its ruins but also for the great wealth of its epigraphic evidence. The archaeological vestiges of this site bear witness to several civilizations. All the phases of its ten centuries of occupation, from prehistory to the Islamic period are represented. The site has produced a substantial amount of artistic material, including mosaics, marble and bronze statuary, and hundreds of inscriptions. This documentation and that which remains to be discovered, is representative of a creative spirit of the human beings who lived there over the ages. The limit of the site is represented by the Roman rampart constructed in 168-169 AD. The features of the site reveal two topographic forms: a relatively flat sloping area in the North-Eastern part, the monumental sector and a part of the sector of the triumphal arch, where the Romans employed an urban hypodamian system, and a rougher hilly area covering the South and Western parts where a terraced plan was adopted. The vestiges bear testimony to diverse periods, from Mauritanian times when it was part of an independent kingdom, to the Roman period when it was a metropolis of the Roman province of Mauritania Tingitana, a period called the « dark ages » with towards the end a Christian era, and finally an Islamic period characterised by the founding of the dynasty of the Idrissids. Criterion (ii): The archaeological site of Volubilis is an outstanding example of a town bearing witness to an exchange of influences since High Antiquity until Islamic times. These interchanges took place in a town environment corresponding to the boundary of the site, and in a rural area extending between the prerif ridges from Zerhoun and the Gharb Plain. These influences testify to Mediterranean, Libyan and Moor, Punic, Roman and Arab-Islamic cultures as well as African and Christian cultures. They are evident in the urban evolution of the town, the construction styles and architectural decorations and landscape creation. Criterion (iii): This site is an outstanding example of an archaeological and architectural complex and of a cultural landscape bearing witness to many cultures (Libyco-Berber and Mauritanian, Roman, Christian and Arabo-Islamic) of which several have disappeared. Criterion (iv): The archaeological site of Volubilis is an outstanding example of a focus for the different kinds of immigration, cultural traditions and lost cultures (Libyco-Berber and Mauritanian, Roman, Christian and Arabo-Islamic) since High Antiquity until the Islamic period. Criterion (vi): The archaeological site of Volubilis is rich in history, events, ideas, beliefs and artistic works of universal significance, notably as a place that, for a brief period, became the capital of the Muslim dynasty of the Idrissids. The town of Moulay Idriss Zerhoun adjacent to the site houses the tomb of this founder and is the subject of an annual pilgrimage. Integrity (2009) The buffer zone (Decision 32 COM 8B.55) and the boundaries of the site (Decision 32 COM 8D) were clarified and approved by the World Heritage Committee in 2008. The boundaries of the property include all the preserved elements that belonged to the fortified town and its outer buildings. The abandonment of the town for many centuries ensured that its ruins remained in an excellent state of conservation. The ruins should be the subject of long-term conservation programmes to preserve their authenticity. Authenticity (2009) Volubilis is remarkable for its urban conception (hypodamian plan and terraced plan), its execution according to well-defined architectural and defensive standards, its construction materials representing various geological aspects, its components reflecting a wealth of town facilities; all these features are still visible today. It is also characterised by its integration into a natural intact landscape and an original cultural environment. Protection and management requirements (2009) Protection measures principally concern the different laws for listing historic monuments and sites, in particular Law 22-80 (1981) regarding the conservation of Moroccan heritage. The management of the site is based on an Action Plan, which refers to a national and international legal statute as well as to the strategy of the Ministry of Culture and decisions of the World Heritage Committee. The management concerns conservation, preventive conservation, excavations, maintenance, security, restoration, presentation of the site and preservation of its protection area. The management plan is under preparation by the Conservation departement of Volubilis, the body responsible for the management of the site. Adoption of the protection zone, the establishment of land ownership of the property, the preparation of the cadastral plan and the development project being established by the Ministry of Culture, all constitute the basic elements of this document. The management plan should treat all new interventions at the site. (Unesco)