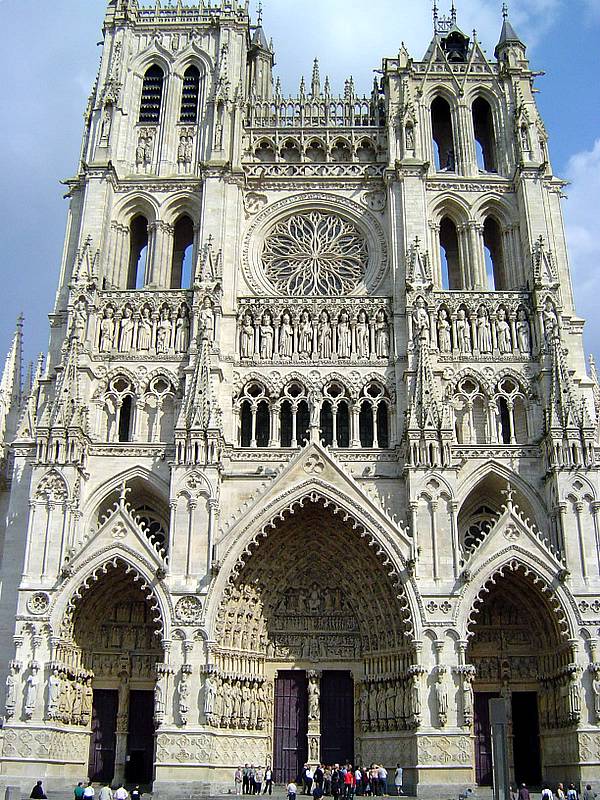 It is the largest of the three great Gothic cathedrals built in France during the 13th century, and it remains the largest in France. It has an exterior length of 476 feet (145 metres)—23 feet (7 metres) longer than Reims Cathedral and 49 feet (15 metres) longer than Chartres Cathedral—with an interior length of 438 feet (133.5 metres). The soaring nave reaches an elevation of 139 feet (42.3 metres) at the apex of the vault, yet it is only 48 feet (14.6 metres) wide. This 3:1 ratio, made possible by the sophisticated cantilevering of the Rayonnant-style construction, gives the nave a greater verticality and elegance than other cathedrals of the period. The lightness and airiness of the interior is increased by the 66-foot (20-metre) height of the flanking aisles and the open arcades and large windows of the triforium and clerestory. The cathedral’s elaborately decorated exterior has its fullest expression in the double-towered west facade, which is dominated by three deep-set arched portals and a richly carved gallery below the immense rose window (diameter 43 feet [13 metres]). Amiens Cathedral was commissioned by Bishop Evrard de Fouilloy to replace a smaller church that had burned down in 1218. Construction of the nave began in 1220 under the direction of the architect Robert de Luzarches. The nave and western facade were completed by 1236, and most of the main construction was finished about 1270. Many later additions took place, including the installation of the grand organ in 1549 and the erection of a 367-foot (112-metre) spire during the same century; extensive restoration work was undertaken by the French architect Eugène-Emmanuel Viollet-le-Duc in the 19th century. The cathedral at Amiens was the site of several noteworthy events, including the marriage of Charles VI to Isabella of Bavaria in 1385. Despite heavy fighting around Amiens during World Wars I and II, the cathedral escaped serious damage. It was designated a UNESCO World Heritage site in 1981.