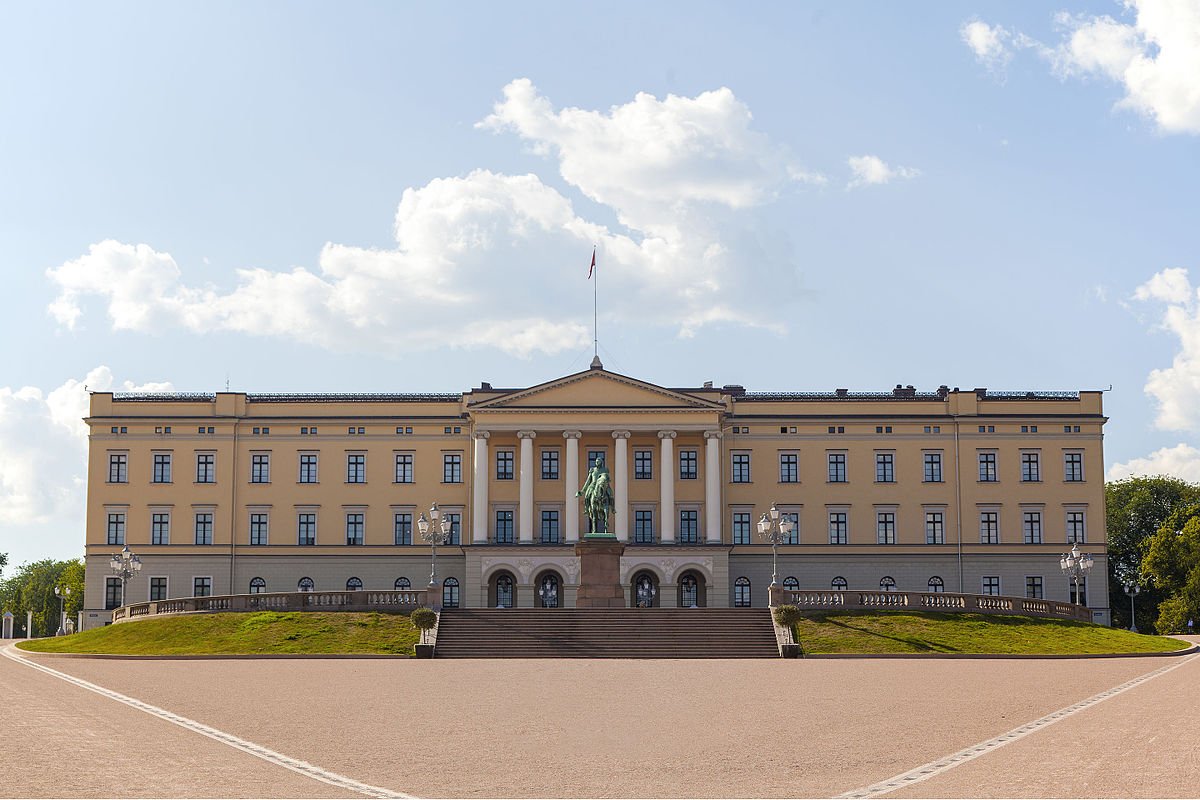 The Royal Palace was built in the first half of the 19th century as the Norwegian residence of King Charles III, who also reigned as king of Sweden and otherwise resided there, and is the official residence of the present Norwegian monarch. The crown prince resides at Skaugum in Asker west of Oslo. The palace has 173 rooms. Until the completion of the Royal Palace, Norwegian royalty resided in Paleet, the magnificent town house in Christiania that the wealthy merchant Bernt Anker bequeathed to the State in 1805 to be used as a royal residence. During the last years of the union with Denmark it was used by the viceroys of Norway, and in 1814 by the first king of independent Norway, Christian Frederick. King Charles III John of the Bernadotte dynasty resided there as crown prince (1814-1818) and later as king during his frequent visits to his Norwegian capital. Charles John chose the site for the permanent Royal Palace on the western side of Christiania in 1821 and commissioned the officer and inexperienced architect, Danish-born Linstow, to design the building. The Parliament approved the stipulated cost of 150 000 Speciedaler to be financed by the sale of government bonds. Work on the site started in 1824, and on 1 October 1825 the king laid down the foundation stone beneath the altar of the future Royal chapel. Linstow originally planned a building of only two storeys with projecting wings on both sides of the main facade. The costly foundation works caused the budget to be exceeded, and the building had to stop in 1827, only to be resumed in 1833. In the meantime, the Storting refused additional grants as a demonstration against the king's unpopular efforts to establish a closer union between his two kingdoms. In 1833, Linstow produced a less costly project without the projecting wings, but with a third storey as compensation. Improved relations with the king made the Storting grant the necessary funds to complete the building. The roof was laid in 1836, and the interiors were finished during the late 1840s. King Charles John never had the pleasure of residing in his palace before he died in 1844, and its first occupants were his son Oscar I and his queen Josephine. It was soon found that the royal family needed a more spacious residence, and the wings facing the garden were extended. Before the official inauguration in 1849, the central colonnade that had been axed in 1833 was reintroduced, and the provisional steep roof was replaced by a more elegant and more expensive flat roof. The next Bernadotte kings Charles IV and Oscar II continued to use the Royal Palace in Christiania, but spent most of their time in Stockholm. King Oscar's wife, Sophia of Nassau, preferred to spend summers in Norway, but mostly stayed at the country manor Skinnarbøl near the Swedish border for the sake of her health. Oscar II was absent from his Palace during 1905, the year of the dissolution of the union with Sweden, but his son, then Crown Prince Gustaf, paid two short visits in his vain attempts to save the union. The Bernadotte dynasty resigned their Norwegian throne in 1905 and was succeeded by Prince Carl of Denmark, who took the name of Haakon VII when he accepted his election as king of completely independent Norway. He was the first monarch to use the Palace as his permanent residence. During the reign and residence of King Olav V from 1957 to 1991, there was no money for renovation, something the poor build quality of the original structure direly needed. After Norway mutated from Scandinavia's poor house to its most wealthy member, the current monarch, King Harald V, could start a comprehensive renovation project. He was criticized because of the amount of money needed to bring the Palace up to a satisfactory state even if much of this went to rectify construction deficits from a century and a half ago. Since public tours began in 2002, the general public has been able to view and appreciate the renovation and splendour that the palace now boasts. References: Wikipedia