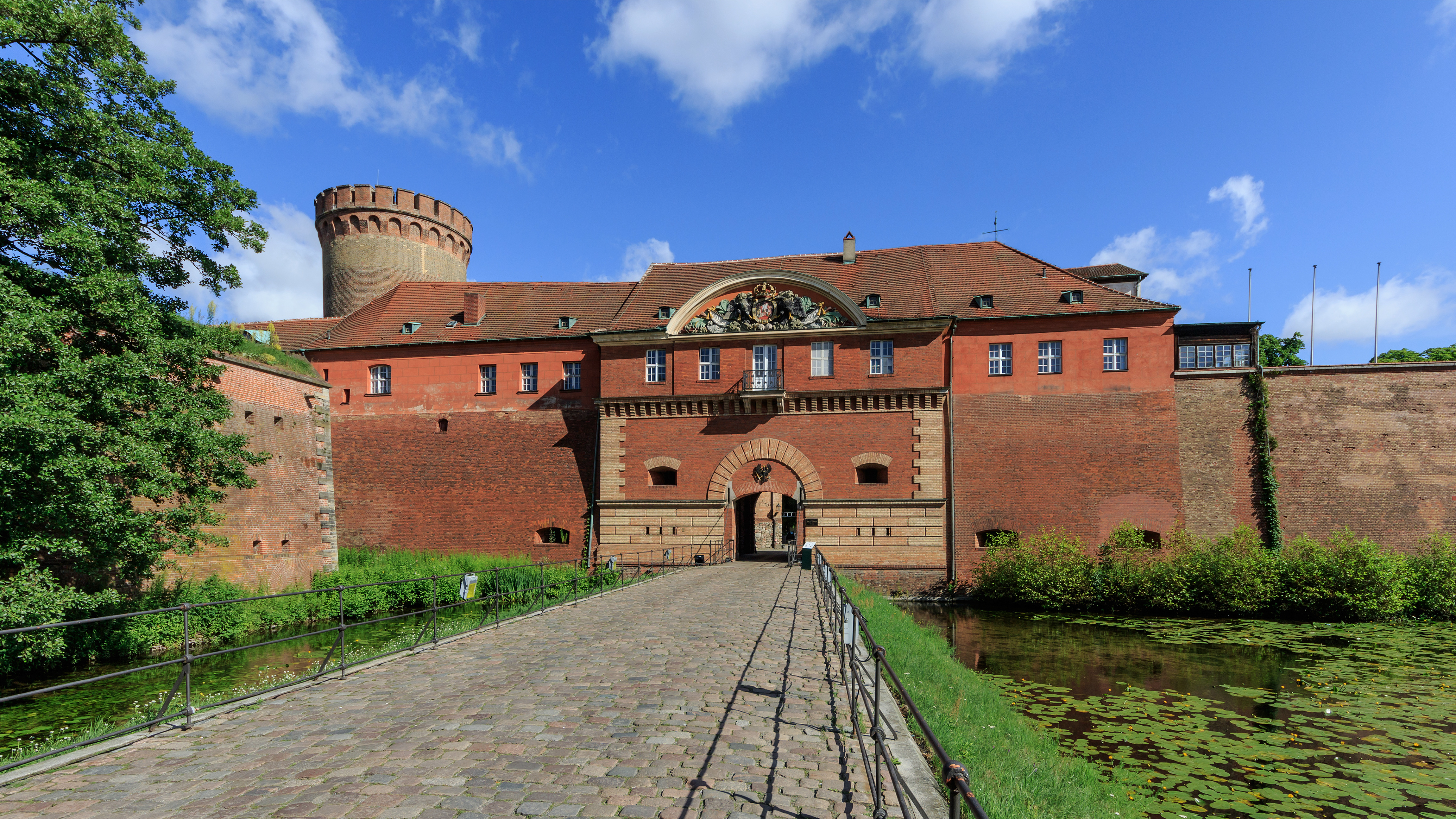 Spandau Citadel is one of the most important and best-preserved Renaissance fortresses in Europe. In the 16th century, developments in weaponry rendered older castles useless. Thus, Kurfürst Joachim II ordered his fortification in Spandau to be constructed as a fortress in the ‘new Italian style.’ The fortress was laid out as a rectangle of curtains (fortress walls) with bastions, entirely encircled by water. The distance between the top of each bastion is about 300 meters. Around 1680, during the time of Friedrich Wilhelm, the segment gable was added to adorn the 16th century gatehouse. In its centre is displayed the Brandenburg coat of arms composed of twenty-seven fields. After Kurfürst Friedrich III. claimed the royal title on January 18, 1701, he had the Kurhut (traditional hat of German princes) above the coat of arms replaced by the royal crown. In 1813 Prussian artillery bombarded the citadel in an attempt to recapture it from Napoleon’s troops. The gatehouse was severely damaged, and in 1839 it was reconstructed in the neo-classical style. Passage through the so-called Commander`s House, today home to the permanent exhibition about the castle and citadel, leads visitors to the Julius Tower. The master builders Chiaramella and Lynar incorporated two buildings from the medieval Castle Spandau into the construction of the fortress: the 13th century Julius Tower and the Palas from the 15th century. The Tower, thirty meters high, offers a splendid look-out point. Originally built for residence and defence, its up to 3,60 meters thick walls were used after 1871 to shelter the ‘Reichskriegsschatz,’ the reparations indemnity paid by the French after the Franco-Prussian War. Archaeological work has revealed that the medieval Ascanian castle had its own, even earlier predecessors. Remnants of a Slavic fortification from around 1050 were discovered, including sections of a wood-earth wall. This structure, as well as the stone foundation of the 15th century castle wall, are presented in situ in the West Curtain. During the Third Reich, the Citadel was a restricted military zone for the army’s gas-defence laboratories. Around 300 employees worked not only on poisonous defence gas, but also on developing chemical weapons. Evidence of lasting effects prompted intensive police searches for chemical residues between 1988 and 1992, considerably delaying the restoration of the Citadel. After the Second World War, the Citadel was used for a variety of purposes - although, contrary to popular legend, Rudolf Hess was never imprisoned here. Today the fortress embraces a purely cultural function. Concerts and large art and historical exhibitions occupy its public spaces. The former Arsenal houses the Museum of Spandau City History, while the central courtyard frequently hosts large events and open air concerts. The Bastion Kronprinz holds exhibition spaces and the Youth Art School.