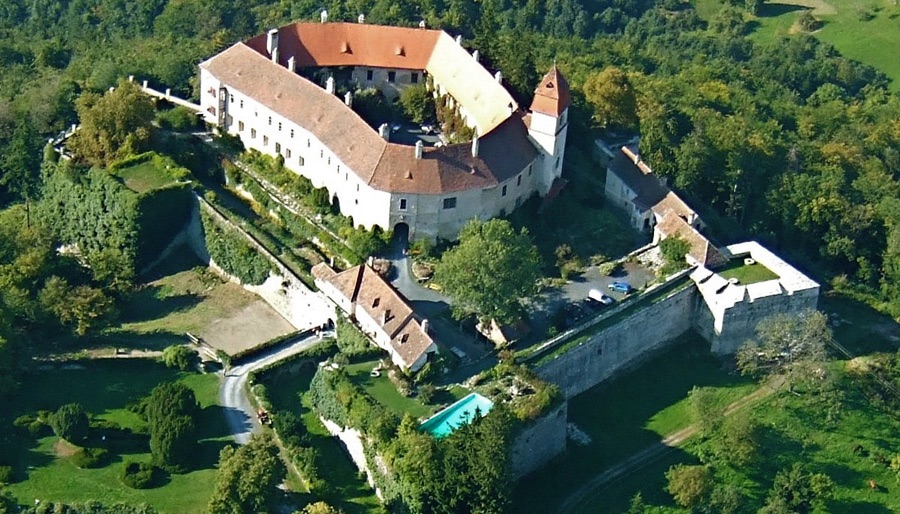 Bernstein Castle was first mentioned in the 13th century. In 860 the whole region was part of the archbishopric of Salzburg. The village name Rettenbach was not mentioned yet, but the old Slavic name of the nearby hamlet Grodnau is a sign of the existence of a nearby castle, identifiable with castle Bernstein. Since 1199 the castle was part of Hungary. It is not exactly known when the castle was handed over to Frederick II, Duke of Austria, and how long it was his property; but in 1236 Béla IV of Hungary conquered the castle. Some years later (in 1260) he gave it to count Henry II of Güssing. In 1336 the counts of Güssing and Bernstein were defeated by the Hungarian King Charles Robert of Anjou, and the castle of Bernstein became part of the Hungarian Kingdom. In 1388 the castle was given to the Kanizsai family. In 1482 it became property of Matthias Corvinus of Hungary for a short time; in 1487 Hans von Königsberg received the castle from Emperor Frederick III. In 1529 the Turks besieged the castle, but they were not able to capture it. Another unsuccessful siege by the Turks followed in 1532. On that occasion the ring of bastions was erected in order to change the castle into a refuge. In 1604 castle Bernstein was unsuccessfully besieged for weeks by a combined army consisting of Hungarians, Turks, and Tatars under the leadership of Stephen Bocskay. Due to an explosion of the gunpowder storeroom, in 1617 Ludwig Königsberg ordered the rebuilding of the Gothic inner part of the castle in Baroque style. The keep and towers were eliminated. A short time later (1644) Ehrenreich Christoph Königsberg sold the sovereignty and the castle to Count Ádám Batthyány. In 1864 Gustav Batthyány sell the castle to his manciple Edward O'Egan, whose heirs finally sold the castle to Eduard von Almásy. His family currently owns the castle. In 1953 a part of the castle was turned into a hotel and restaurant. References: Wikipedia