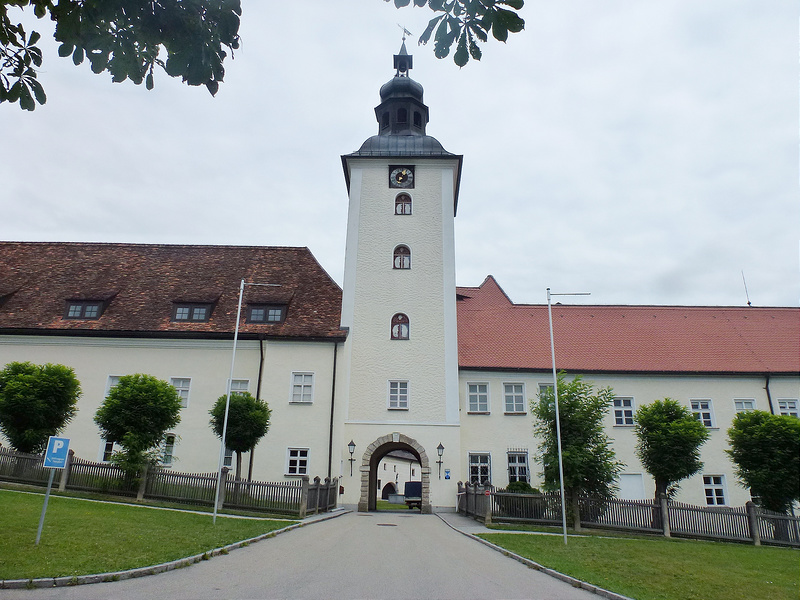 Located in a scenic village in the hills of the Flachgau (that?s where I am from, by the way), it still maintains a private school; the famous Baroque artist Michael Rottmayer was a graduate. The library holds 40,000 volumes. The monastery?s oldest parts are cloisters from the 9th century, most of today?s structures are late Medieval and the interiors are predominantly Baroque. A monastic cell existed in Dorfbeuern as early as 736 or thereabouts, referred to in the Aachen Monastery Register in 817. After the Hungarian wars, reconstruction began in 977 with an endowment from Emperor Otto II. More times of crisis came upon the abbey with the fire of 1346, mismanagement of the prebendal income and the effects of the Reformation. From the 17th century however Michaelbeuern began a long period of prosperity, which led to ambitious building works, for example the Baroque high altar of 1691 in the abbey church, by Meinrad Guggenbichler and Johann Michael Rottmayr. At this time more than twenty-five monks of Michaelbeuern gained their doctorates at the Benedictine University of Salzburg. The community also took on many pastoral responsibilities in the surrounding parishes. During the National Socialist period the monks were expelled, but returned after World War II. The abbey church, re-romanised, was re-dedicated in 1950. The abbey today is a thriving Benedictine community, well known as an educational and cultural centre. The abbey runs a school and owns different business like a farm, a district heating plant, a biogas plant and a participation in a brewery (Augustiner Bräu Kloster Mülln).