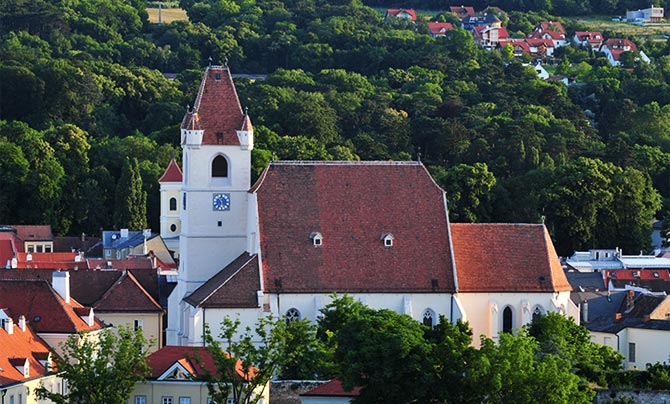 St. Martin's Cathedral in Eisenstadt was first mentioned 1264. From this chapel there are still remains of a Romanesque foundation in the area of the present choir. In the 13th century the chapel was extended by the addition of an early Gothic choir. In the 14th century a chapel for lay people was added. In 1460 the church was rebuilt under the town captain Johann Siebenhirter as a fortified or defensive church, as an attack by the Turks was expected after the Fall of Constantinople in 1453. The Gothic building was finished in 1522. After the great fire of 1589 almost 30 years passed before construction of the severely damaged church took place, between 1610 and 1629. In 1777 a large altarpiece by Stefan Dorffmeister was added, depicting 'The Transfiguration of St. Martin'. In the following year the Viennese organ builder Malleck installed an organ to instructions from Joseph Haydn. After the creation of the Diocese of Eisenstadt, St. Martin's Church was elevated to the rank of cathedral in 1960. Saint Martin became the patron saint of the diocese and the Land. Under Bishop Stephan László in 1960 the interior and windows were renewed. The cathedral is famous for its church music. Concerts of the annual Haydn Festival also take place here. In 2002/2003 the cathedral was renovated again, the interior was refurbished. The modern furnishings were designed by the artist Brigitte Kowanz.