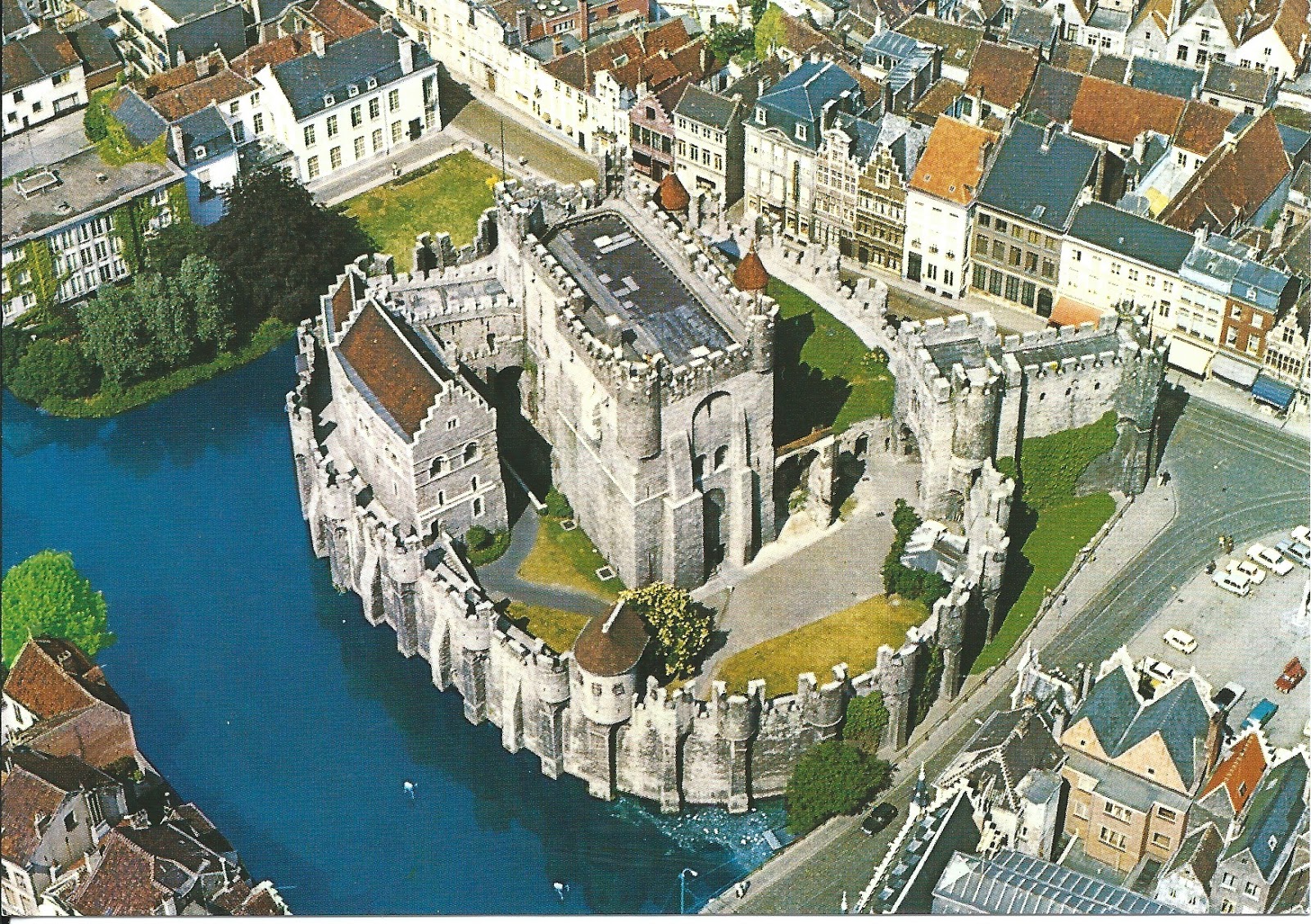 The Gravensteen is a castle in Ghent originating from the Middle Ages. The name means 'castle of the counts' in Dutch. Arnulf I (918–965), Count of Flanders, was the first to fortify this place, building a medieval bastion on this high sand dune, naturally protected by the river Leie and its marshy banks. This bastion consisted of a central wooden building and several surrounding buildings, also in wood. In the early 11th century, the wooden building was replaced by a stone residence, consisting of three large halls that made up three storeys, connected by a stone stairwell. The monumental stone staircase, the light openings, the fireplaces built into the walls and the latrines were signs of considerable luxury and comfort in those days. There was probably also a tower. This building phase, attributed to Count Baldwin IV (938–1035) or Count Baldwin V (1035–1067), coincided with reorganizations within the County of Flanders, as a result of which the Gravensteen became the centre of a viscounty, a regional administrative unit. A century later, the motte-and-bailey castle was constructed, consisting of a raised earthwork (the motte) and an enclosed courtyard (the bailey). Motte-and-bailey castles were quite widespread in the 11th and 12th centuries. A moat was dug around the castle, and the dug-up earth was used to create a mound around the stone central building. Consequently, the ground floor became the cellar, and the second floor became the new ground floor. In 1176 a fire ravaged both the main castle and the buildings on the bailey. An inscription in Latin above the entrance gate states that Count Philip (1168–1191) built this castle in 1180. The motte hill was made higher and wider. The central building became a mighty donjon, standing at about 30 metres tall, with two basement floors and two large storeys above ground, the lower of which was fitted out with a brick barrel-vaulted ceiling. The upper hall was purely residential. The entrance gate to the count’s fortress was reinforced with an outer gate, connecting to the stone enclosure, which had projecting turrets with machicolations and battlements for defence. Around the same time, the entire bailey was given a thorough overhaul and became the home of the new stone Sint-Veerlekerk (Saint Pharaildis Church), which was consecrated on 30th June of the year 1216. The old wooden buildings surrounding the main castle on the motte were also replaced by stone buildings. Remnants of this are still visible to this day in the eastern outbuilding and in the count's residence. Today, the stables are among the best-preserved annexes. A row of columns, decorated with beautiful leaf-patterned capitals and corbels, divides the vaulted space into two naves. Later the castle was the seat of both the Council of Flanders, the county’s highest court, and the feudal court of the Oudburg, a regional bench of aldermen. The Council’s competence included serious criminal offences and lese-majesty. New buildings were erected for both courts: courtrooms, clerks’ offices and dungeons. Victims were detained in the semi-subterranean rooms, preventively or during their trials, in atrocious circumstances. They were sometimes subjected to gruesome torture in order to make them confess. Typically they would only be in preventive custody a few days, just prior to their trials, but there were horrifying exceptions. The count’s minting workshop was moved to the castle around 1353. In 1491, however, the city of Ghent lost its minting activities because of its inhabitants’ rebellious attitude towards Maximilian I of Austria (1459-1519). Today, only the name of the street Geldmunt (“money mint”) reflects this activity. Over the course of the 18th century, the Gravensteen gradually lost its function as the administrative centre. Several of the vacated buildings were publicly sold. Engineer Jean-Baptiste Brismaille bought the former motte castle and converted it into an industrial complex. The existing buildings now housed cotton mills, a metal construction workshop and some fifty working-class families. At the gate, Brismaille built an executive residence. By the second half of the 19th century, the outdated buildings were no longer in line with safety regulations, which had become stricter, so the businesses moved to the outskirts of the city. The Gravensteen was slated to be demolished and sold as a building lot. The development plan included tearing down the castle, levelling the motte plateau and building two roads right across the plot. Fortunately, the project fell through due to a lack of interest. Starting in 1865 the City of Ghent, together with the Belgian State, began systematically buying back the buildings on the former motte from private individuals. This initiative was prompted by the actions of a small group of Ghent’s citizens, fostering a spirit of historic preservation, both in politics and in public opinion. In 1888 the dismantling works began, and practically everything that was not made from Tournai limestone was demolished, laying bare the impressive remains of the medieval castle. Restoration work started in 1893, following the example of French restorer Eugène Viollet-le-Duc. The architect in charge, Jozef De Waele, opted for a romantic interpretation of the castle back in the time of Count Philip of Alsace. In 1907 the restored parts of the Gravensteen were opened to the public. Since the 1913 World Fair in Ghent, numerous cultural activities, events and parties have been held at the Gravensteen, which is now the city’s single most important tourist attraction.