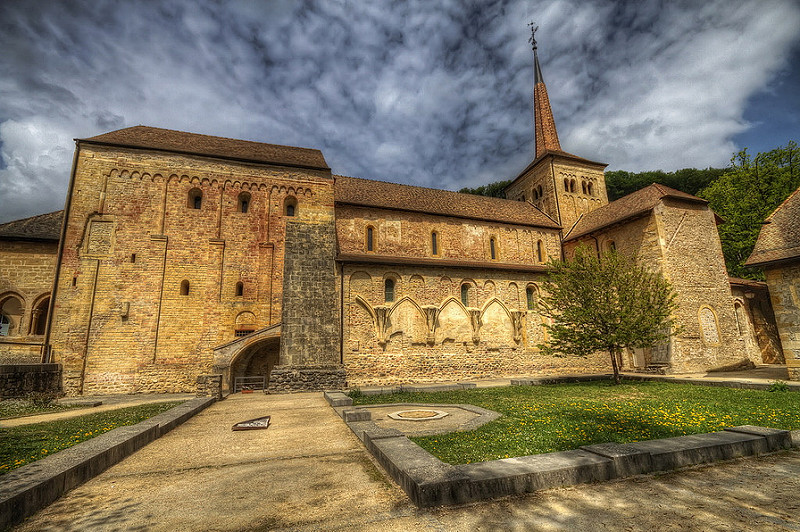 Excavations carried out in 1905-15 discovered traces of a church dating from the 5th century, which confirmed this early date. In the 6th century, there is a record of an abbot Florianus who was abbas ex monasterio de Romeno, which is probably a reference to Romainmôtier. The early monastery fell into disrepair and was rebuilt by Duke Chramnelenus. This rebuilt monastery was placed under the monastic rule of Saint Columbanus by 642. The 5th-century church was enlarged and in the 7th century a second church was built with a rectangular choir. The second church was built on the south side of the first. Pope Stephen II visited the monastery in 753 while traveling for a meeting with Pepin the Short and according to tradition consecrated the churches of Saints Peter and Paul. In the 9th century Romainmôtier saw another period of decline. Lay abbots took possession of the monastery. In 888, the Guelph King Rudolf I of Burgundy gave the priory and its lands to his sister Adelheid, the wife of the Duke of Burgundy, Richard II. On 14 June 928/929, Adelaide gave the monastery and its lands to Cluny Abbey. Under Cluny Abbey, Romainmôtier Priory experienced its third golden age. Abbot Odilo of Cluny, who resided more than once in Romainmôtier, had the present church built at the end of the 10th century. This church was modeled after the second church of Cluny Abbey. At the beginning of the 12th century, the church was modified by the construction of an ornate narthex and in the 13th century of a gatehouse. The last modifications were made to the church in 1445. After a financial crisis in the 14th century, the monastery recovered and reached the height of its power at the end of the 14th and early 15th century. In the mid-15th century it passed into the secular hands of the Savoy dynasty and their associates. The income of the abbey became a source of personal income and the monastic rules were less and less respected. When the Protestant Reformation arrived (1536), the monastery was already on the decline. In the 14th century about twenty monks still lived in the priory. By the 16th century it was about ten. Despite the protests of Fribourg, Bern secularized the priory on 27 January 1537. The priory church, which was now used for Reformed service, was damaged and rebuilt. The Prior's House was converted into a castle for the Bernese Vogt and the remaining buildings were rented or sold. Only some of the more distant properties escaped being taken by Bern. Some monks settled in Vaux-et-Chantegrue and created a simple countryside priory, which was abolished during the French Revolution. The priory buildings were restored in 1899-1915 and again in 1992-2000.