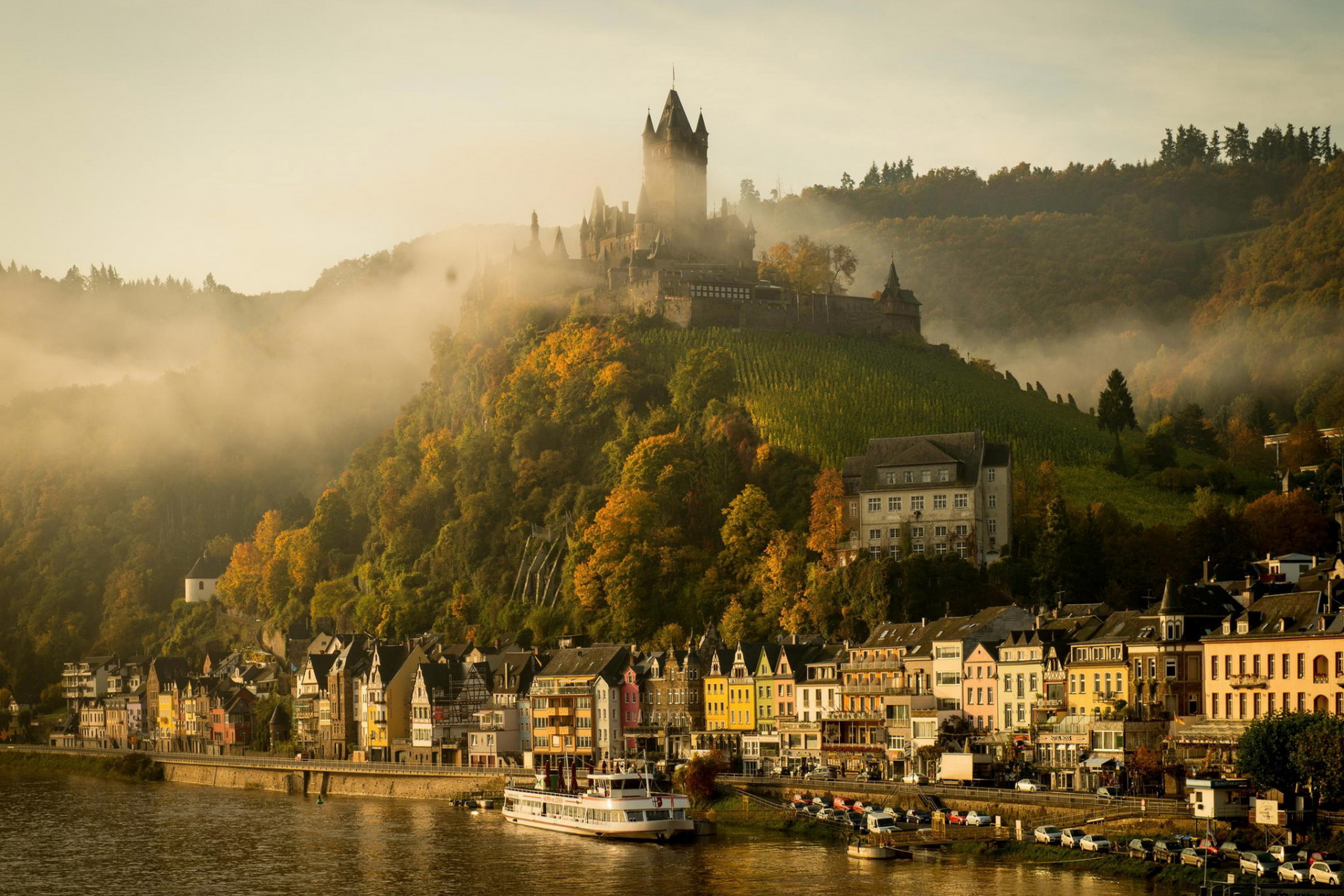 The original Cochem Castle, perched prominently on a hill above the Moselle River, served to collect tolls from passing ships. Modern research dates its origins to around 1100. Before its destruction by the French in 1689, the castle had a long and fascinating history. It changed hands numerous times and, like most castles, also changed its form over the centuries. In 1151 King Konrad III ended a dispute over who should inherit Cochem Castle by laying siege to it and taking possession of it himself. That same year it became an official Imperial Castle (Reichsburg) subject to imperial authority. In 1282 it was Habsburg King Rudolf’s turn, when he conquered the Reichsburg Cochem and took it over. But just 12 years later, in 1294, the newest owner, King Adolf of Nassau pawned the castle, the town of Cochem and the surrounding region in order to finance his coronation. Adolf’s successor, Albrecht I, was unable to redeem the pledge and was forced to grant the castle to the archbishop in nearby Trier and the Electorate of Trier, which then administered the Reichsburg continuously, except for a brief interruption when Trier’s Archbishop Balduin of Luxembourg had to pawn the castle to a countess. But he got it back a year later. The Electorate of Trier and its nobility became wealthy and powerful in large part due to the income from Cochem Castle and the rights to shipping tolls on the Moselle. Not until 1419 did the castle and its tolls come under the administration of civil bailiffs (Amtsmänner). While under the control of the bishops and electors in Trier from the 14th to the 16th century, the castle was expanded several times. In 1688 the French invaded the Rhine and Moselle regions of the Palatinate, which included Cochem and its castle. French troops conquered the Reichsburg and then laid waste not only to the castle but also to Cochem and most of the other surrounding towns in a scorched-earth campaign. Between that time and the Congress of Vienna, the Palatinate and Cochem went back and forth between France and Prussia. In 1815 the western Palatinate and Cochem finally became part of Prussia once and for all. Louis Jacques Ravené (1823-1879) did not live to see the completion of his renovated castle, but it was completed by his son Louis Auguste Ravené (1866-1944). Louis Auguste was only two years old when construction work at the old ruins above Cochem began in 1868, but most of the new castle took shape from 1874 to 1877, based on designs by Berlin architects. After the death of his father in 1879, Louis Auguste supervised the final stages of construction, mostly involving work on the castle’s interior. The castle was finally completed in 1890. Louis Auguste, like his father, a lover of art, filled the castle with an extensive art collection, most of which was lost during the Second World War. In 1942, during the Nazi years, Ravené was forced to sell the family castle to the Prussian Ministry of Justice, which turned it into a law school run by the Nazi government. Following the end of the war, the castle became the property of the new state of Rheinland-Pfalz (Rhineland-Palatinate). In 1978 the city of Cochem bought the castle for 664,000 marks. References: German-way.com