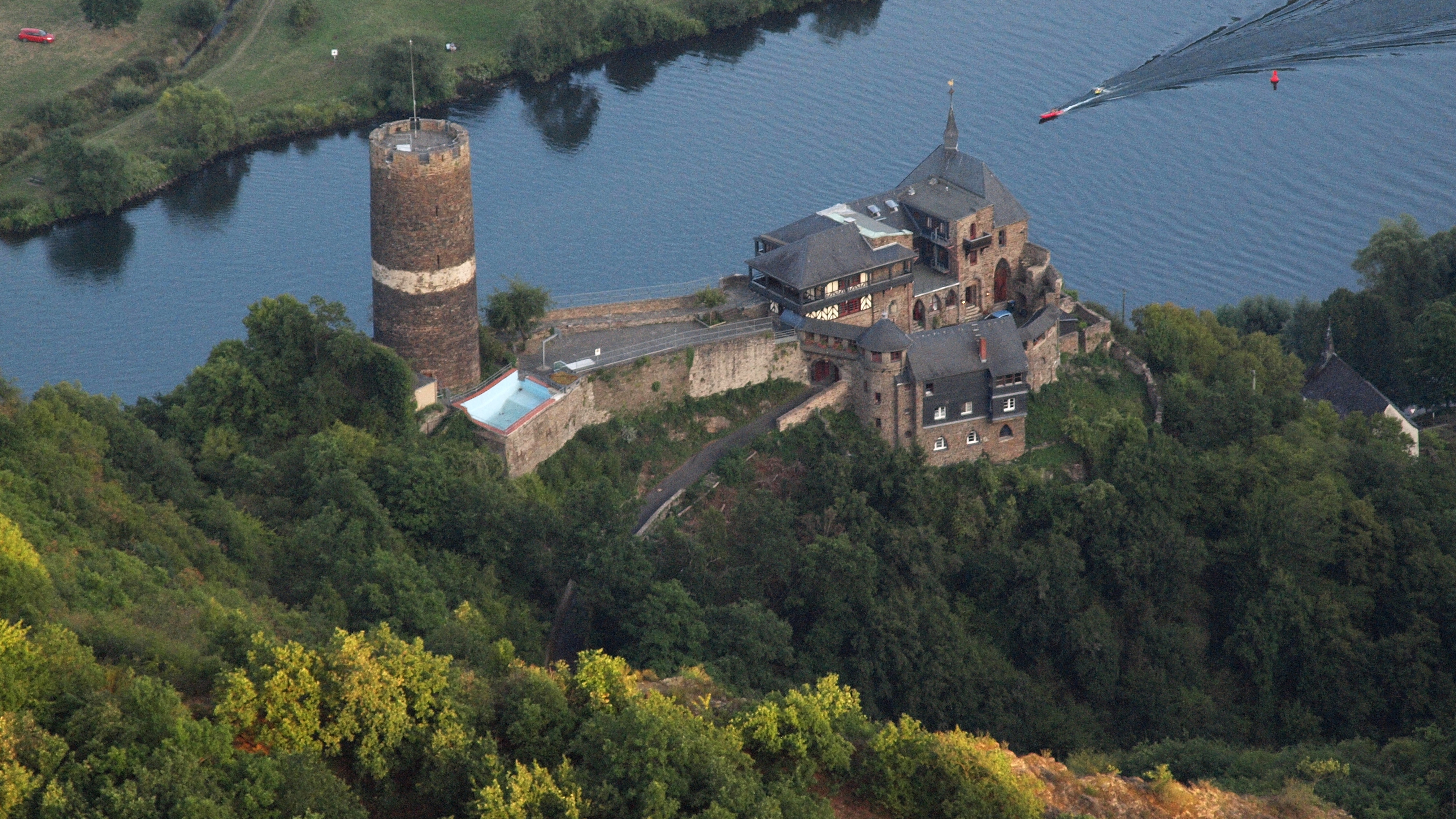 Folk tales and old Moselle-area historiographies allege that Burg Bischofstein began as the palace for the Holy Bishop Nicetius (527-566). The current Bischofstein castle was probably built in 1270. Archbishop Arnold II. Heinrich von Bolanden bought the half-completed Burg and paid for the rest of the construction himself in 1273. It is said that in 1552 Markgraf Albrecht von Brandenburg attempted, without success, to besiege Bischofstein. This is, however, undocumented. The Thirty Years' War negatively affected the Moselle. For example, on October 26, 1631, Louis XIV left the nearby village of Münstermaifeld destroyed. Despite this, a detailed visitor log in the Burg's chapel from 1680 indicates that Burg Bischofstein endured the war without damage. In 1688, during the War of the Grand Alliance, Louis XIV sent troops to weaken the Palatinate following its refusal to ratify the Truce of Regensburg. These French troops succeeded in destroying Burg Bischofstein in 1689. In 1794 the French annexed part of the Rhineland and the French regime liquidated many of the Church's possessions because they were seen as French national property. The ruins of Burg Bischofstein, which at that time belong to the St. Castor monastery in Karden, were treated as such. They were sold at a state auction to the winemaker Nicolaus Artz on September 29, 1803. In 1824 it was reported that a house with seven inhabitants was built at the site of the ruins. After this the ownership of the ruins is unknown. Until 1880 the castle lay in ruins. At this time the Burg belonged to the Bienen family from Rheinberg. On 11 April 1930 the heirs sold the castle to a businessman from Darmstadt named Erich Deku, who wanted to rebuild the castle for use as a summer home. It was not reconstructed, but used the preserved walls newly erected. In order to achieve this, builders had to create a pathway for construction vehicles. This partly required rock blasting. Deku furnished the Burg with an extensive art collection. Below the castle, he discovered a polyptych from 1530. The reconstruction that stands today was completed by the Neuerburg family from Trier in 1938. Aenny Neuerburg bought the Burg at auction when bankruptcy proceedings against Deku were opened in 1936. The entire art collection was included in the offer. From 1941 to 1946 the Burg served as a sanitorium for soldiers and as a hospital and refugee safehouse under the leadership of Aenny Neuerburg. Mrs. Neuerburg's son Raymond then took over the leadership position and with his family operated a hostel for foreigners. Today, Burg Bischofstein is a designated and protected historical spot; not as an 800 year old castle, but as an example of the architectural style of the 1930s. Every year, Classes 5-9 and 11 from Fichte Gymnasium travel to Burg Bischofstein. Schools all around Germany also visit the Burg. During vacations the Burg is used predominantly by vacationing groups. References: Wikipedia