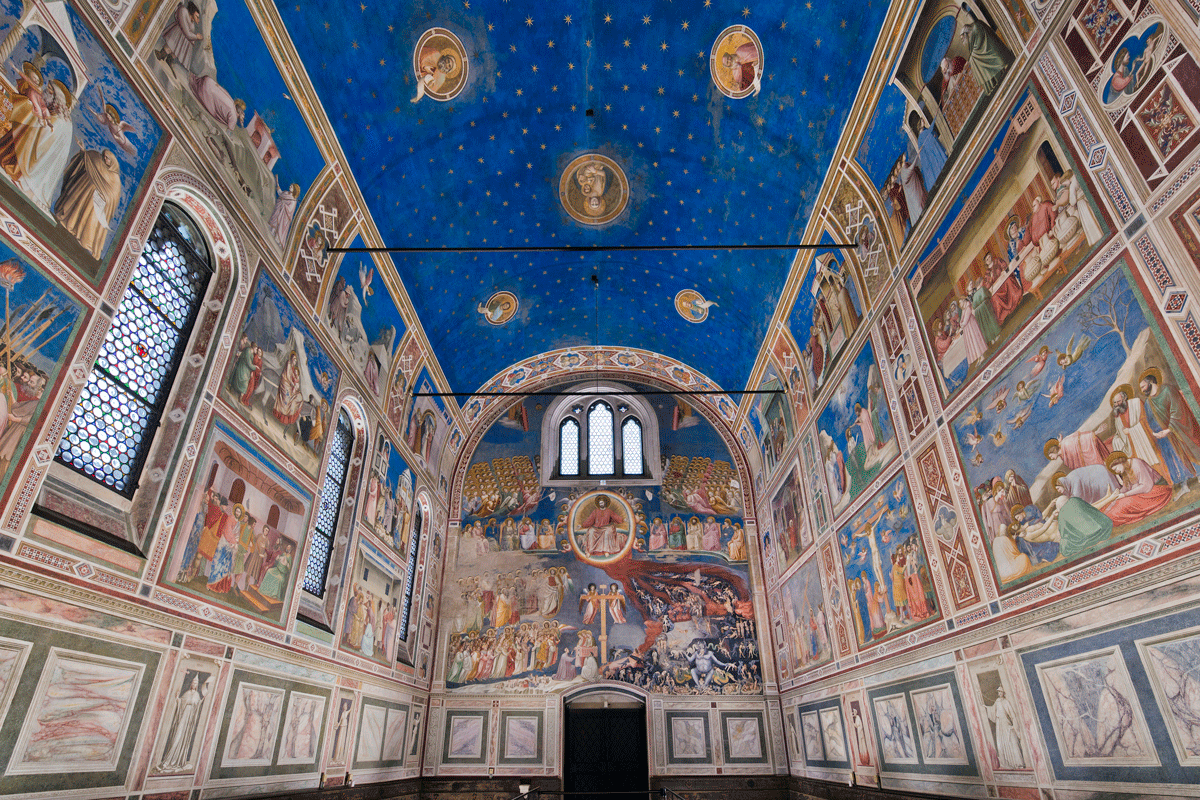 The Scrovegni Chapel contains a fresco cycle by Giotto, completed about 1305 and considered to be an important masterpiece of Italian and European art. The fresco cycle details the life of the Virgin Mary and has been acknowledged by many to be one of the most important fresco cycles in the world. The church was dedicated to Santa Maria della Carità at the Feast of the Annunciation, 1303, and consecrated in 1305. Decoration of the Scrovegni Chapel was commissioned at the beginning of the fourteenth century by a wealthy Italian banker called Enrico Scrovegni. It was a family chapel, built, some believe, a restitution for Scrovegni's involvement in less-than-reputable dealings. The chapel was originally connected with the Scrovegni palace, which was built on what remained of the foundations of the elliptical ancient Roman arena. The palace was demolished in 1827. Frescoes Giotto frescoed the chapel's whole surface, including the walls and the ceiling. The fresco cycle is organised along four tiers, each of which contains episodes from the stories of the various protagonists of the Sacred History. Each tier is divided into frames, each forming a scene. The chapel is asymmetrical in shape, with six windows on the longer south wall, and this shape determined the layout of the decoration. The first step was choosing to place two frames between each double window set on the south wall; secondly, the width and height of the tiers was fixed in order to calculate the same space on the opposite north wall. Cycles of scenes showing the Life of Christ and the Life of the Virgin were the grandest form of religious art in the period, and Giotto's cycle is unusually large and comprehensive, showing the ambition of the commission. Allowing for this, the selection and iconography of the scenes is broadly comparable to other contemporary cycles; Giotto's innovation lies in the monumentality of his forms and the clarity of his compositions. The cycle recounts the story of salvation. It starts from high up on the lunette of the triumphal arch, with the uncommon scene of God the Father instructing the Archangel Gabriel to perform the Annunciation to Mary. The narrative continues with the stories of Joachim and Anne (first tier from the top, south wall) and the stories of Mary (first tier from the top, north wall). After a return to the triumphal arch, the scenes of the Annunciation and the Visitation follow. The stories of Christ were placed on the middle tier of the south and north walls. The scene of Judas receiving the money to betray Jesus is on the triumphal arch. The lower tier of the south and north walls shows the Passion and Resurrection; the last frame on the north wall shows the Pentecost. The fourth tier begins at ground level with the monochromes of the Vices (north wall) and the Virtues (south wall). The west wall (counter-façade) presents the Last Judgment. References: Wikipedia