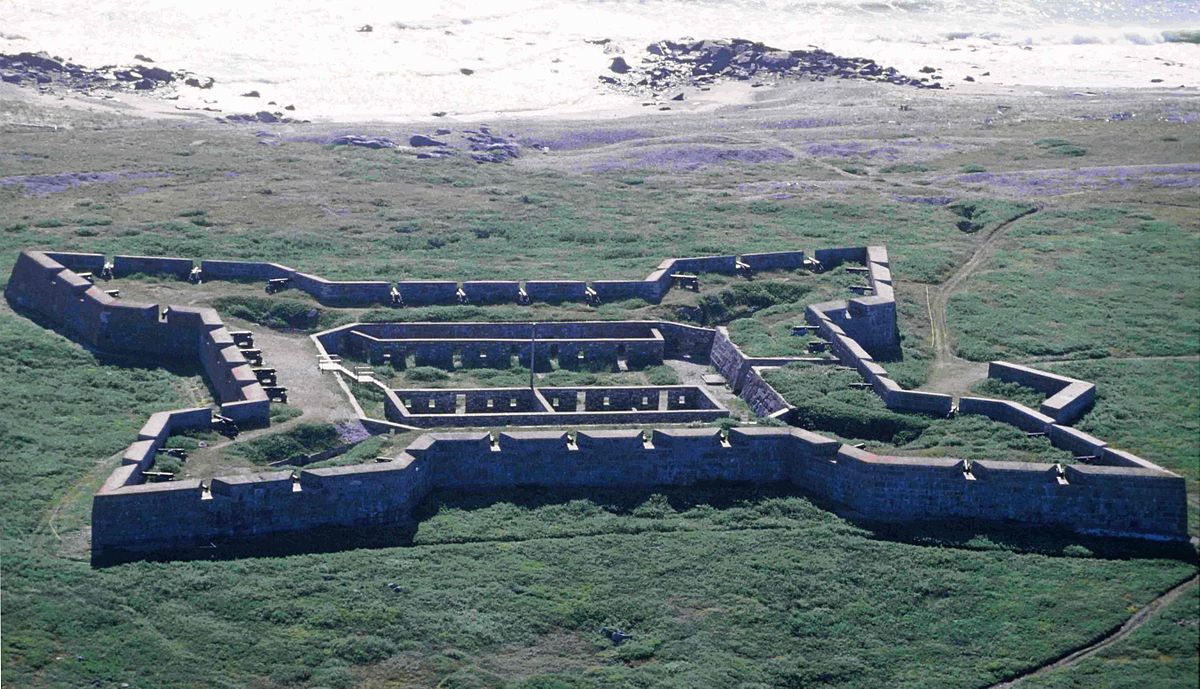 The first wooden fort was built in 1717 by James Knight of the Hudson's Bay Company (HBC) and was originally called the 'Churchill River Post'. In 1719, the post was renamed Prince of Wales Fort, but is more commonly known today as Fort Prince of Wales. It was located on the west bank of the Churchill river to protect and control the Hudson's Bay Company's interests in the fur trade. The original wooden fort was replaced by a massive stone fort, perhaps to abide by the Royal Charter which required that Rupert's Land should be fortified. Construction of this fort, a structure still standing today, was started in 1731 near what was then called Eskimo Point. It was in the form of a square, with sides 100 metres long and walls six metres tall and 10 metres thick at the base. It had forty-two cannons mounted on the walls. There was also a battery across the river on Cape Merry meant to hold six more cannons. Work on the fort continued almost without break until 1771, but it was never truly completed. In the 1780s, the French government launched a 'Hudson Bay Expedition' to damage HBC activities in that bay. Three French warships of the Expedition, led by Jean-François de La Pérouse, captured the Prince of Wales Fort in 1782. The fort was manned by only 39 (non-military) men at the time, and the fort's Governor, Samuel Hearne, recognised the numerical and military imbalance and surrendered without a single shot being fired. The French partially destroyed the fort (but its mostly-intact ruins survive to this day). The fort returned to the HBC in 1783. Thereafter, its importance waned with the decline in the fur trade although the post was refounded a little way up the river. The remains of these buildings still stand in the Fort, although none of them are intact, with roofs long since deteroriated. After the construction of the Hudson Bay Railway to Churchill was completed in 1929, railway labour and railway construction equipment was used to restore the fort. Restoration work was also performed in the late 1950s. Archaeological investigations at and around the fort began in 1958. Since 2005, Parks Canada archaeologists have been working in and around the fort in conjunction with a large-scale wall stabilization work and a fort interpretation program. References: Wikipedia