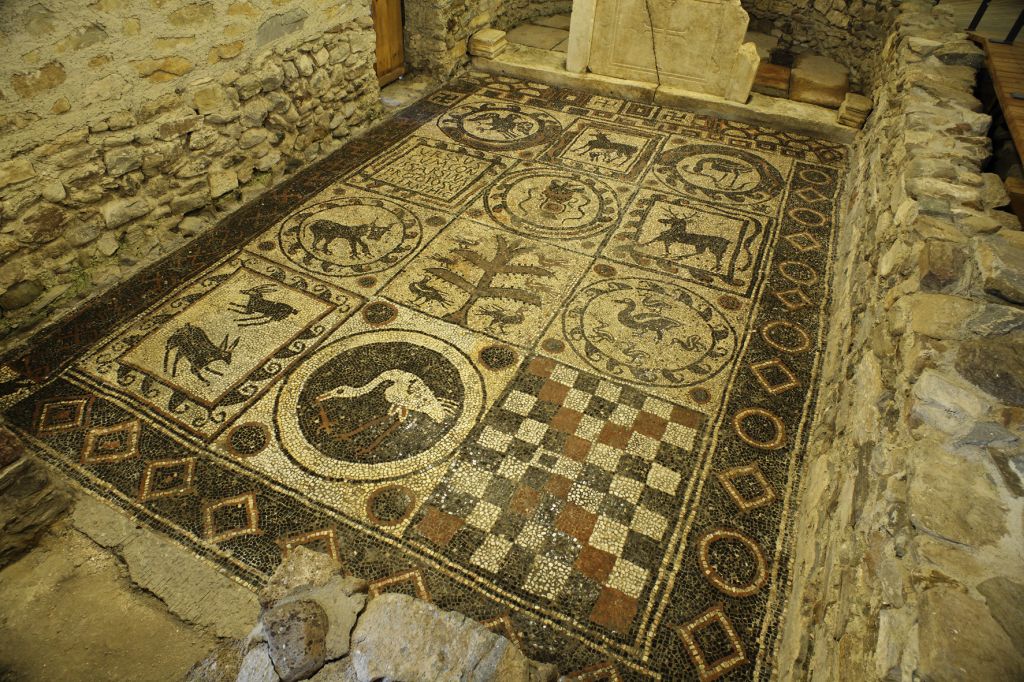 Located 4 km W of Spittal on the Drau, on the Roman road Virunum-Aguntum-Brenner where this intersected with the road to Iuvavum (via Radstädter Tauern). The origin of the name is obscure, and of the history of Teurnia little is known. We know from Pliny (HN 3.146) that it became a municipium with Virunum, Celeia, Aguntum, and Iuvavum at the time of Claudius (A.D. 41-54); Ptolemy (Geog. 2.13) mentions it among the Noric towns. It had no garrison since its location was strategically unimportant. Because of its out-of-the-way location the town was evidently unaffected by the Marcomannic wars and the invasions of the 3d c. A.D.; at least no traces of sacking have been found. The settlement is located on an elongated, isolated hill, the so-called Lurnfeld, on the N bank of the Drau. The first excavations (1910-15) provided only scant information about the town of Early and Middle Imperial times. Only two buildings from this period are known, both located on a flat stretch on the SE spur of the hill: the baths (ca. 48 m long), axial in plan, and N of the baths the forum (incompletely excavated), a paved place surrounded on three sides by porticos. The town of this period seems, however, not to have been limited to the hill but to have extended into the plain. At the E foot of the hill was the pagan necropolis. More is known about Teurnia in Late Imperial times when the town began to be more important. It is known from the Vita Sancti Severini of Eugippius (v. 17; 21; 25) and from other sources that Teurnia (then called Tiburnia) was at that time a bishopric. In the 5th c. A.D., when the former provincial capital Virunum began to decline, it even became metropolis of the remaining Roman province of Noricum (mediterraneum). It suffered from the increasing attacks of Germanic tribes (siege by the Goths ca. A.D. 473) and perished ca. A.D. 590 m the invasions of the Slavs and Awari. About A.D. 400 the hill was fortified with walls and towers. Beneath St. Peter's church, judging by the meager finds, was the bishop's church, which has been built over and destroyed. The Early Christian cemetery is located on the plain at the NW foot of the hill where a cemetery church, probably in the early 5th c., has been discovered. Because of the unusually rich finds there, it is the most interesting Early Christian church building in Austria Romana. The plan is unusual, without clear parallels. Its latest condition is certainly the result of several building periods. The original plan included a rectangular hall (ca. 22.2 x 9.25 m) with two apsidal side chapels including anterooms. Later additions are a narthex, two corridors on the sides, and the vestry for the N side chapel. The foundations and fragments of the stone furnishings give an idea of the interior. The presbytery was set off by barriers decorated with reliefs. The unattached clergy bench had a service table at either end. The reliquary was sunk into the paved altar square, and above it rose the four-legged table altar. Fragmented stone reliefs from the presbytery barrier are all that is left of the other side chapel. The right side chapel was better preserved. The apse was separated, and the pedestal table altar stood on a reliquary that had been constructed from a Roman sepulchral altar of the 1st or 2d c. A.D. The most important find was a floor mosaic (6.10 x 4.25 m) in the nave. Dating from ca. 500, it is the latest work of art of Austria Romana. It is in excellent condition, containing within an ornamental frame 12 fields, representations predominantly of animals. One field is reserved for the inscription of the donors: the governor Ursus, called a vir spectabilis, and his wife Ursina. These buildings—unique in the E Alpine area—have been turned into a museum. The ground plan has been preserved, and a protective building has been constructed over the right side chapel with the mosaic floor.