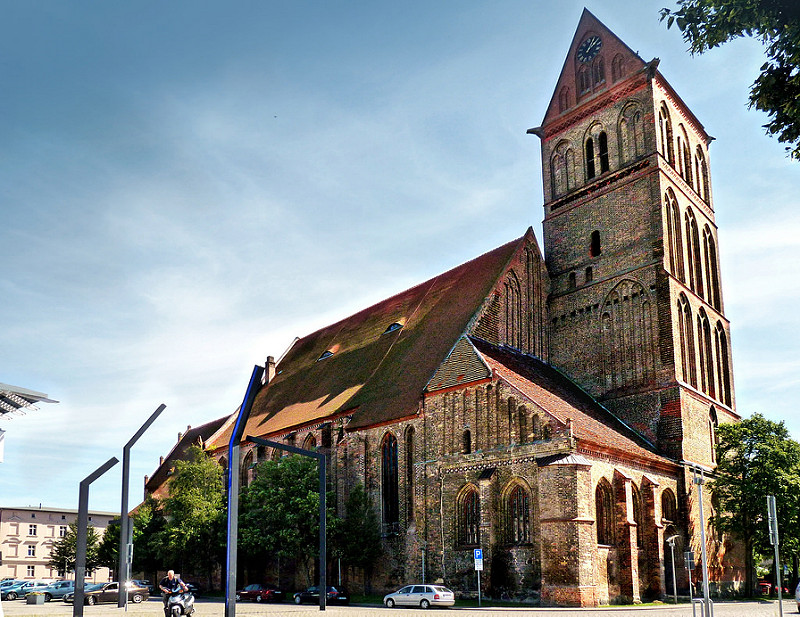 To this day, one part of the church's double tower and a square-shaped presbytery have been preserved. St. Mary's was mentioned for the first time in written documents in 1296. At the end of the 15th century, the church’s presbytery was enlarged by three aisles, and the ceiling and south chapel were raised; no major architectural changes to the building's structure have been undertaken since. In 1488, the church changed its name to St. Mary’s Chapel. In 1535, at the time of the Reformation, the church was run by two vicars. As a result of a siege in 1676/77 by forces serving the Brandenburg family, the church was damaged. It was successfully rebuilt with support from a local duke. Between 1778 and 1849, a smaller bell tower was demolished in the church's eastern wing. In 1806, the French army used the church to store hay and straw during the Napoleonic wars. In 1814, new organs were consecrated and in 1816 the burnt top of the steeple was restored. In the years 1849-1852 the church's first floor gallery along with some of the church's ornamented banks was destroyed; composer Karl Loewe later was behind the reconstruction of the gallery over the aisle and organs. In 1887, the top of the steeple was raised to almost 100 metres, and the church was gifted a couple of new organs. During interior renovation work in 1936, the gothic frescos from the second part of the 14th century were discovered on pillars and the ceiling. The church was severely damaged in 1943 as a result of aerial bombings. All the valuable objects housed in St. Mary's were moved to Schweringsburg Castle, only to be destroyed during a fire in 1945. In 1947, the church's two-sided tower was rebuilt. The main altar featuring a cross from sister church St. Nicholas', as well as two new bells were installed. In 1957, the church was re-consecrated and in 1962 the restored altar, St. Mary’s sculpture and the Schuke organs were returned. In 1971, St. Mary's existing organs were joined by a new organ boasting 5 registers and an additional pedal. In 1992, the reconstruction of the church's roof, external walls, ceilings, heating system, doors and vestry commenced.