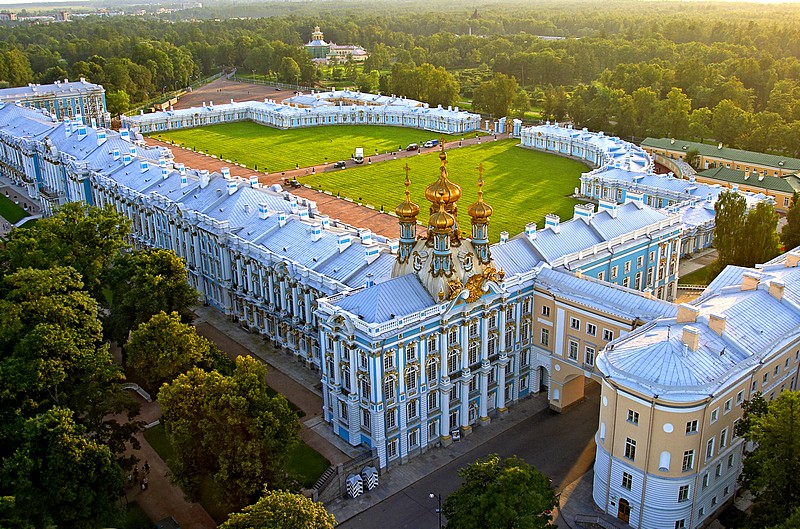 If any proof is needed for the extravagance of Russia's Imperial rulers, then it can be found in the fact that, in less than two centuries, the Romanov Tsars established not one but two suburban estates - at Tsarskoe Selo and Pushkin - that, in terms of grandeur and excess, outstrip even Versailles. What is more, at Tsarskoe Selo, the 18th century saw the construction of two vast and truly exceptional palaces, both surrounded by extensive landscaped gardens with diverse and fascinating decorative architecture.Built for Empress Elizabeth by Bartolomeo Rastrelli, the architect of St. Petersburg's Winter Palace, the Catherine Palace is undoubtedly Tsarskoe Selo's top attraction, particularly renowned for the extraordinary Amber Room. Less well known, and currently much more dilapidated, the Alexander Palace is nonetheless a neoclassical masterpiece, and has a particularly poignant connection with the family of the last Tsar, Nicholas II. The town of Pushkin, which surrounds the Tsarskoe Selo estates, is St. Petersburg's most charming suburb. Renamed in Soviet times to honour Russia's greatest poet, the town has numerous sights connected to Alexander Sergeevich, including a museum in the former Imperial Lycee, where he was schooled. Like Pushkin, Tsarskoe Selo is one of St. Petersburg's must-see attractions, and can easily occupy visitors for a full day. And, like Pushkin, it can be very crowded during the tourist high-season in the summer. Arrive early or be prepared to join long queues, especially for the Catherine Palace.