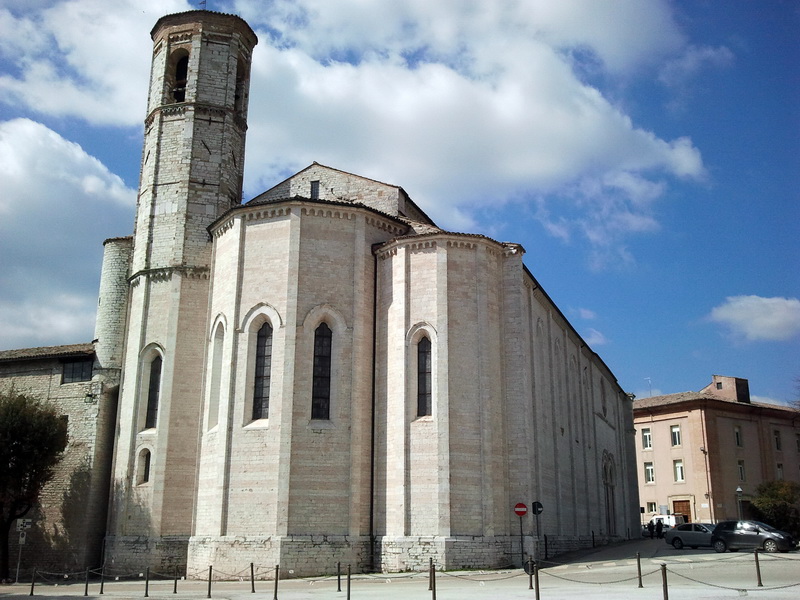 It was built around 1255 inside a vast Franciscan complex built by the residents of Gubbio on the lands of the ancient Spadalonga family. It was this family that in 1206-1207 is said to have taken in and clothed Saint Francis after he abandoned the family home and renounced his wealth, and it was here that the saint wore a habit for the first time, which was to become the outfit of the Franciscans. Giacomello Spadalunga of Gubbio, 'he who once was his friend' as the biographer writes, met Francis in the prison of Perugia, after the defeat of Collestrada. The erection of a great church and convent dedicated to Francis, just a few years after his death, was strongly desired by the city of Gubbio, which took him in and adopted him. The building features an ogival layout, with an incomplete facade that nevertheless still presents a beautiful Gothic doorway and a cornice with suspended frames topped with a small rosette. The three apses follow a polygonal structure interrupted by mullioned windows. The interior is subdivided into three naves supported by 14 high columns with octagonal bases. The cross vaults of the ceiling result from the sudden transformation of the building in the 18th century. The lateral walls, which back in the day were covered in frescoes, have lost part of their splendour, but the apses still feature important works of the 13th-15th centuries. The left apse features the Stories from the life of the Virgin, over 17 panels, a highly regarded piece of art from the first years of the 15th century, created by Ottaviano Nelli. The central apse, in the top section, features a fresco of Jesus on the Throne with Saint Peter, Saint Paul, Saint Francis and Saint Anthony at his side, works created by a local follower of the Master of Saint Francis during the second half of the 13th century. The right apse, next to which stand the ancient ruins of the Storehouse, features frescoes from the 13th and 14th centuries: in the top part, two episodes of the life of Saint Francis,; in the bottom centre, the Saviour; and on the sides, the Evangelists, between cornices. On the walls are frescoes of Saints.