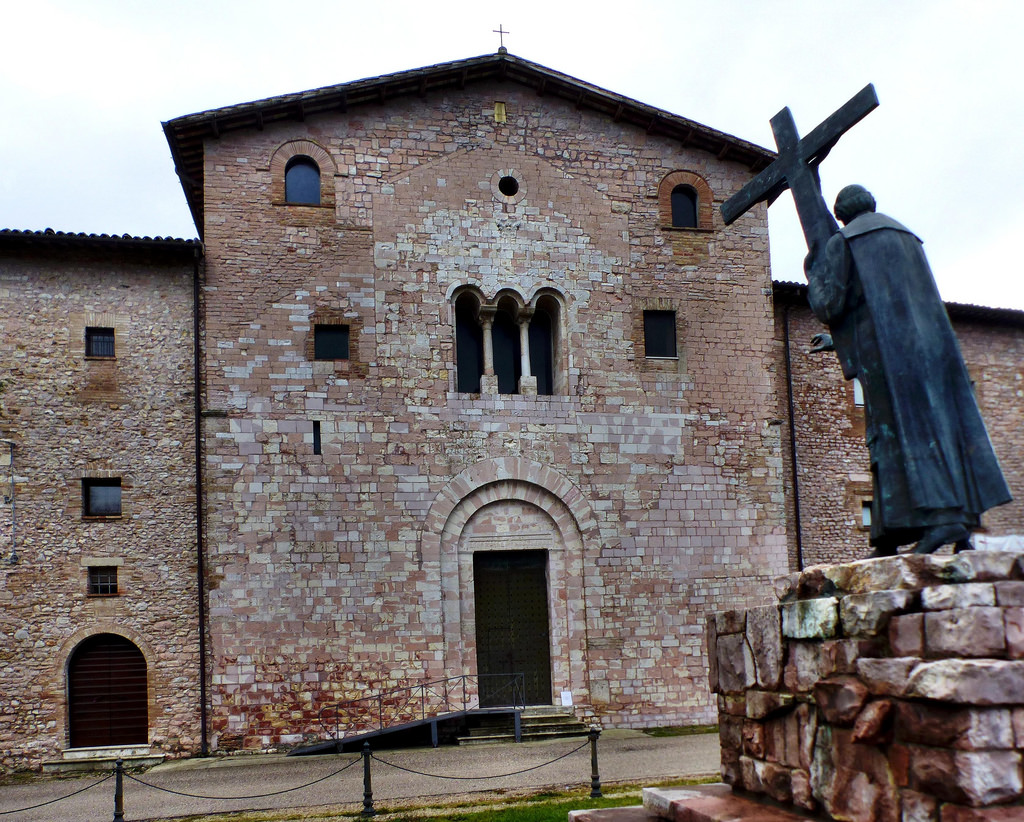 The church was built on an oratory from the 4th century which held the tomb of the martyred bishop Felice. In 1373 the abbey passed under the jurisdiction of the abbey of Sassovivo until 1450, when it was granted to the Order of the Hermits of St. Augustine of Perugia. The state of disrepair it had fallen into required restoration work which began in 1452, ending in 1481. Further modifications inside were carried out in the 16th century and in the 18th century. The abbey was completely changed with the removal of the staircase in the presbytery and the complete rendering of the walls and of the apse area. The cloister and the abbey buildings were also constructed at that time, which were built on the right-hand side of the church. In 1957 a particularly complex and thorough restoration returned the interior to its original, more austere form, "freeing" the structure from the elaborate eighteenth-century decoration. The church has three very narrow and high naves, without a transept and ending with a triconch apse. There is a raised presbytery with the staircase restored during the renovation works in the 20th century. The central nave is covered with a lowered barrel vaulted ceiling, whilst the side naves have a cross vaulted ceilings. The three naves are separated by two rows of traditionally Longobard circular pillars. A triumphal arch which divides the nave from the presbytery has a mullioned window at its centre. There is currently a gabled façade, a transformation brought about by adding ashlar masonry in the 16th century, although originally, as you can still see, it had a four-sided pitched roof, corresponding to the different heights of the naves. It frames an elegant three-mullioned window with salvaged columns and capitals and a door with simple insets. The three apses are decoratively clad externally, separated by thin pillars resting on a high base and culminating in small hanging arches. The crypt is subdivided into three apsidal naves, with cross vault ceilings and the central nave which is in turn divided into three parts by six columns. The crypt is characterised by capitals depicting stylized animals and plant motifs, which can be dated to the end of the 11th century. An ancient sarcophagus containing the remains of the martyr San Felice is located behind the altar. The rectangular cloister's portico is supported by solid square brick pillars; above each pillar are frescoes of saints and the blessed. The frescoes on the walls depict stories from the life of San Felice. At the centre of the cloister is a cistern which collects rainwater. Since 1815 the abbey has been headquarters of the Missionaries of the Precious Blood, founded by San Gaspare del Bufalo.