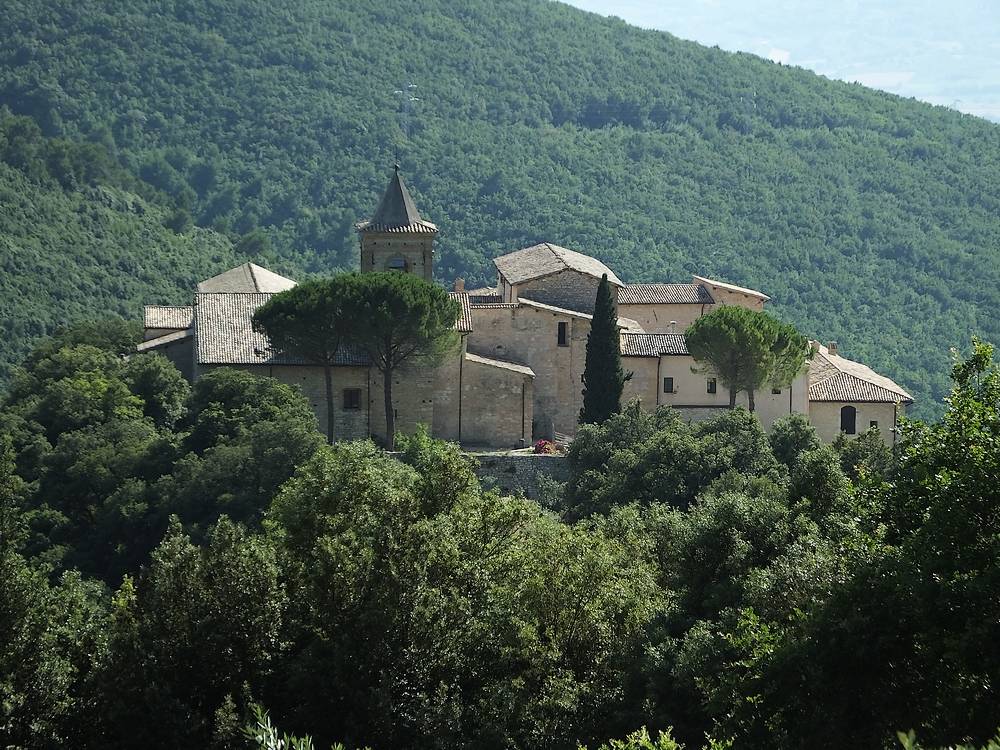 The abbey complex is enclosed by defence walls and is built around two courtyards (cloisters) surrounded by buildings that have been added over the years. The first of the cloisters is on the hill is surrounded by the church, two dormitories and by a building which holds the kitchen; the other is in the valley and has a long rectangular shape. It is framed by the abbot's residence and by buildings thought to have been the infirmary. The cloister on the hill is a highly rare example of Romanesque architecture and sculpture (1229). It has a rectangular layout and comprises a courtyard surrounded by an elegant portico made up of 128 paired smooth and spiral colonnettes, with capitals with lily decoration, supporting 58 round arches resting on a low wall. Above the arches is a beautiful classical entablature with coloured marble and two mosaic frames. The individual parts of the arcades were made in Rome at the Vassalletto stone mason's, and later transported and mounted on site, whilst the mosaic frames were made on site by Nicola Vassalletto. On the cloister walls there are traces of painted plaster which lead us to believe that they were decorated. Specifically, in the north wing you can see a frescoed lunette depicting the Virgin enthroned with Child (1280). At the centre of the courtyard is a well-curb from 1623 covered by a delicate metal structure, placed on site after the restoration of the cistern (1340). From the cloister you can reach the Monastery and the large refectory with its back wall decorated with a fresco dated 1595, depicting the Last Supper; further fragments of monochrome frescoes from the early ‘400, can be seen on the walls of the "Loggia del Paradiso", a passageway between the interior and exterior of the monastery. The first structure was built in 1082 by the hermit Mainardo, starting from a pre-existing building located within an incomplete fortified enclosure. The hermit completed it giving it an almost perfectly square shape, built the church and created a kitchen and refectory in the original building; moreover he built a new structure to be used as a dormitory, which was originally rectangular. In the early 1200s, the abbot Niccolò had the church extended and built a dormitory on the south-eastern side, redefining the space for the construction of the first cloister, built by the Roman master Pietro de Maria. The building thought to have been the infirmary was built along with the abbot's residence adjacent to pre-existing perimeter walls, creating a second cloister located between these rooms and the new construction where there were also facilities for pilgrims and the sick. The original church was probably extended towards the presbytery which even today is lit by an immense, tall, gothic window. Between 1229 and 1232 the cloister was built and in 1314, the abbot Filippo XXIV had its east wing raised, along the right-hand wall of the church, closing the windows which previously let light into the latter. The monastic community set up a centre of learning and scriptorium and thanks to donations from the Counts of Foligno and private individuals, acquired a huge patrimony which at the beginning of the 1200s included 92 monasteries, 41 churches and 7 hospitals. It had a huge social and economic influence in the local area and the religious community provided welfare assistance. The extensive archives (7500 pieces) made up of well-preserved parchments and documents dating back to the beginning of the 11th century, and currently housed at the Diocesan Archives of Spoleto bear witness to this. The beginning of the fifteenth century marked a period of decline for the abbey. When in 1467 Pope Paul II established the Commandry of the abbey, it had already partially lost control of its properties; in a short time all of the properties were lost, despite the efforts of the Benedictine Olivetan monks. In 1814 the abbey was closed and in 1834 the monks were forced to cede control of the property to the bishops of Foligno, which had been badly damaged by the 1832 earthquake; in 1860 the properties passed to the State, to the "Bishop's Trust" (mensa vescovile) and to a private individual. In 1979, the "Brothers and Sisters" of the Jesus Caritas Community settled there. Of the original structure, unfortunately only the perimeter walls, the foundations of the monastery in the valley, and the splendid Romanesque cloister, remain.