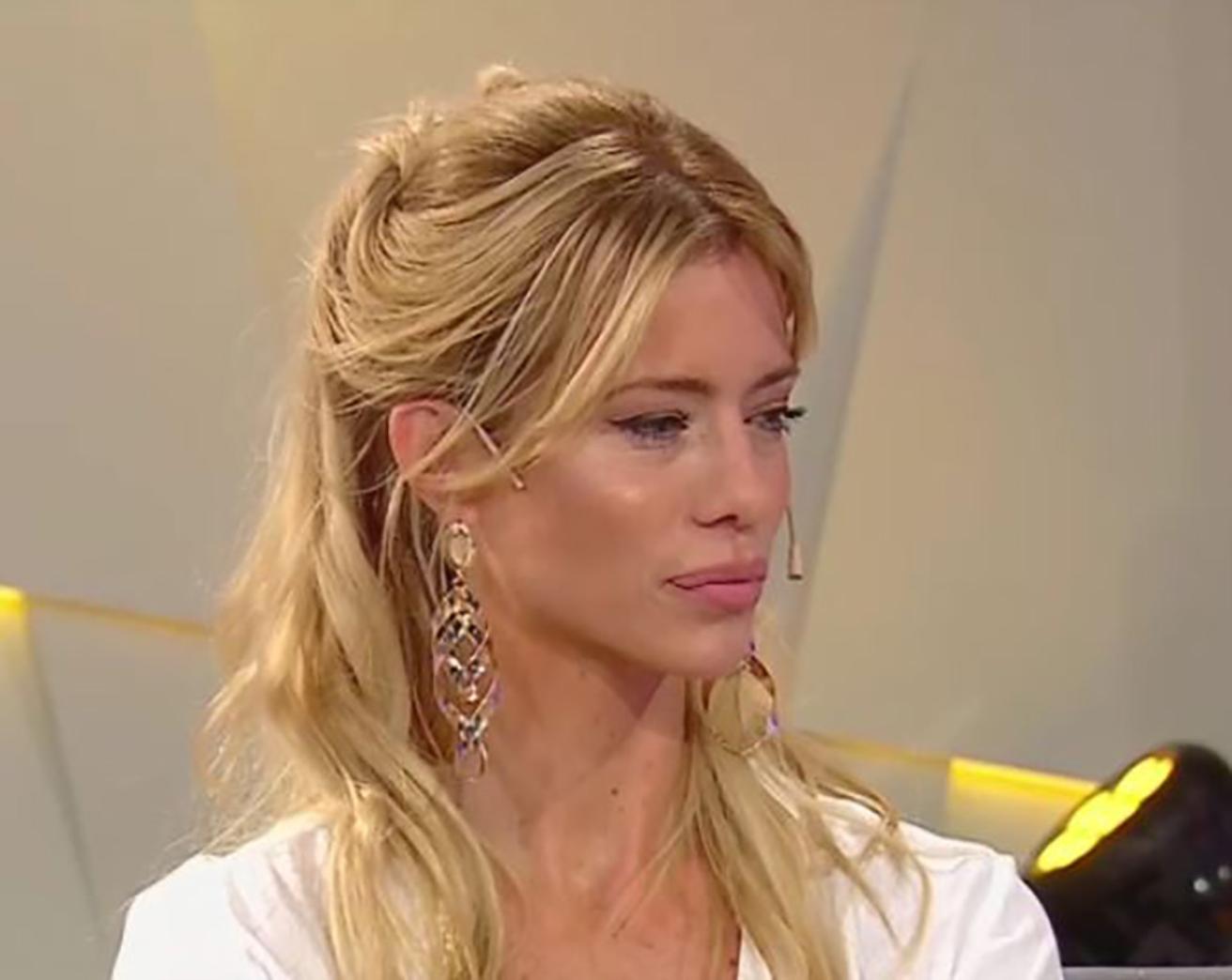 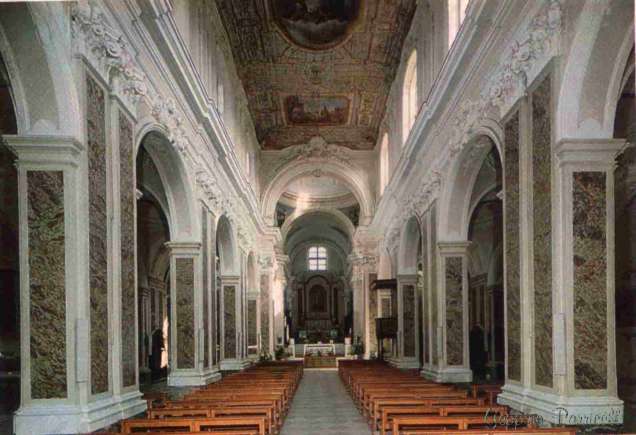 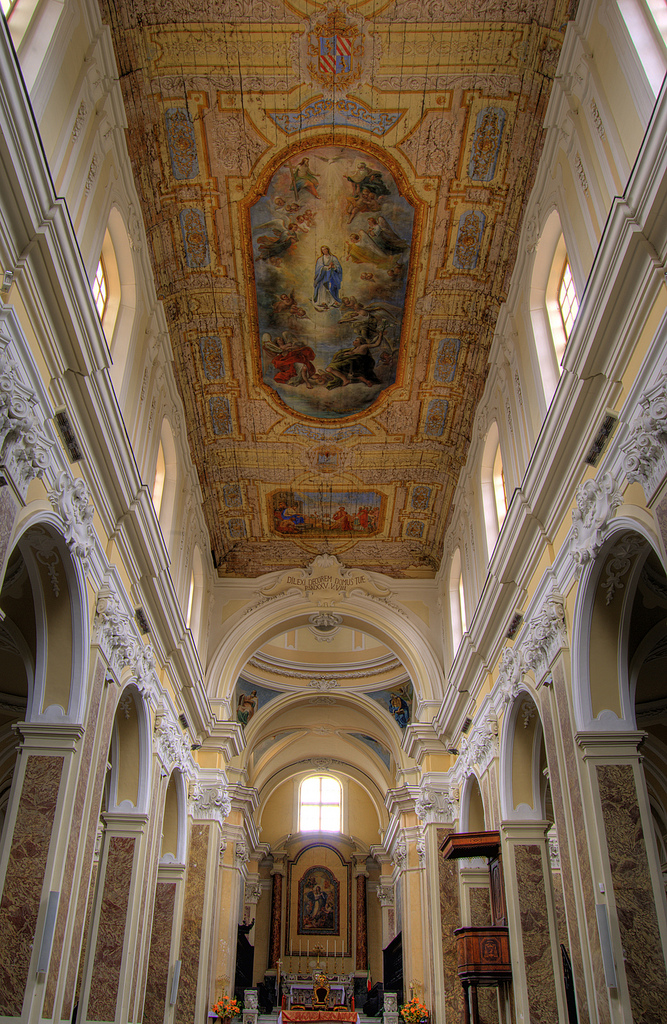 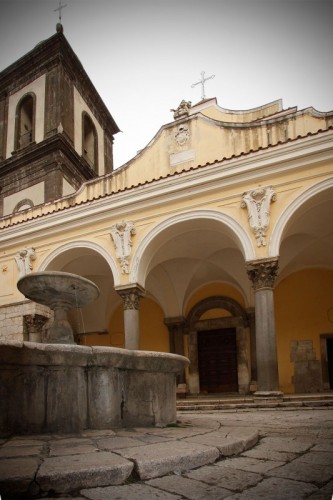 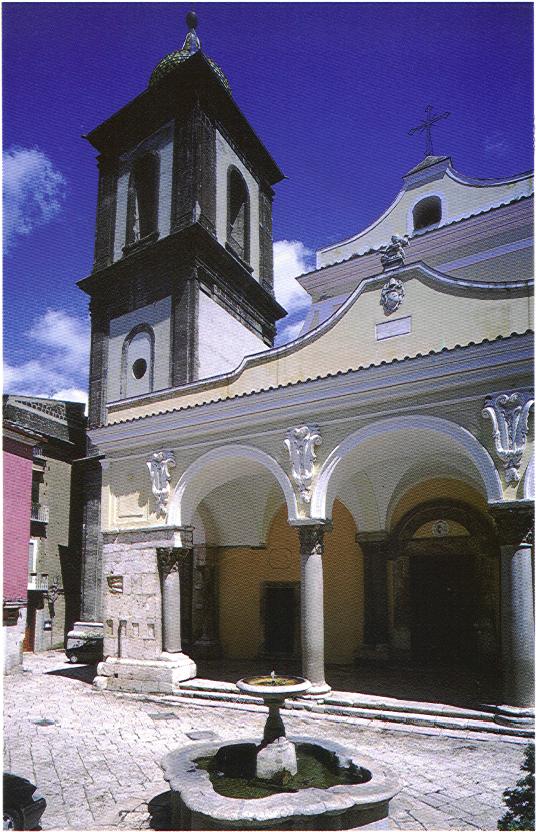 A pagan temple, dedicated to the goddess Tellus (Ceres) or to all deities, later transformed into a Christian temple, dedicated to the Assumption, between the 7th and 8th centuries? This is a hypothesis to be tested. Reconstituted the diocese in 970, it was a cathedral, richly decorated by Bishop Adelard (975-999). A century later, during Norman rule, it was totally rebuilt in the Romanesque style. In 1728, already damaged by the earthquake of 1456, the fall of the bell tower in 1614, and the earthquake of 1688, it was torn down and rebuilt in Baroque style. It was reopened for worship in 1741. Despite extensive restorations in 1877-1879 and other less profound ones in this century, the 18th-century structure remained unchanged FACADE AND BELL TOWER In the facade, more than half of which is occupied by the atrium, the ancient structure is not legible: it had a rose window and only a central entrance door, The Romanesque bell tower collapsed in the 1456 earthquake. By 1484 it had been rebuilt. Struck by lightning in 1588, it fell on 22. 11. 1614. Rebuilt soon after to the second level, it was completed with the third and the dome in the years 1730-1740. THE PORTICO Structured in the early 12th century with boulders, columns and capitals of perusal, dating from the 1st to 4th centuries AD, it also served for the civil parliaments of the "Universitas Sanctagathensis." On the main façade, the statue of the Assumption; on the side ones, of St. Agatha and St. Stephen, all three from 1796. The coat of arms of Sixtus V commemorates his episcopate here (1566-1572). THE PORTAL. Of the late 11th century, refers to that of Montecassino and that of Carinola. The architrave is raised; the lunette, narrowed. The archivolt, ornamented with foliage, rests on two Ieons. The doors, enlarged in height, are from 1647; the coat of arms, of Bishop Gandolfo; in the medallion the Titulars; the Assumption, St. Agatha and St. Stephen. THE INTERIOR. Latin-cross plan; three naves divided by heavy pillars; on the aisles, eight chapels; the ceiling, in painted wood, neI 1877-1879 replaced the 18th-century one: it shows the martyrdom of St. Stephen, the Immaculate Conception, the martyrdom of St. Agatha. The holy water stacks are from 1716; the floor from 1907; the pulpit from 1877; canvases and marble from the 17th and 18th centuries; the baptismal font, in the form of a large capital, is Romanesque. Click to enlarge image HATS (Right on entering): 1) of Carmel, with floor deI 1752; 2) of the Nativity; 3) of the Blessed Sacrament, with altar from 1716, display of tabernacle from 1514, plaque-list of pastors from 1983; 4) of St. Anne, with admirable high relief, depicting the Holy Family, carved by Gianbattista Antonini in 1717 - 1718 THE CHORUS It served 30 canons and 12 mansionaries for the singing of the Divine Office. It was carved in 1650-1653 by Master Alessandro De Rosa, who with great power of imagination populated it with monstrous faces and animals. In the years 1740-1750 the canopied seat for the bishop was inserted. The high altar, now dismembered, closed the choir. Designed by painter Tommaso Giaquinto, it was sculpted by Lorenzo Fontana in 1714. On it on solemnities St. Alphonsus M. de' Liguori celebrated the pontifical Mass. THE MOSAIC It covered the nave and now only part of the chancel: three fragments in front of the altar and a large fragment at the left aisle, dating from the early 13th century. The large fragment possibly reproduces the universe (zodiac) with the symbols of the evangelists at the four corners. THE CRIPTA From the late 10C, with three apses, it has remained intact. Ten columns support cross vaults and four columns the vault of the central apse. Columns and capitals are of perusal: Roman, Byzantine, Lombard, Norman. The frescoes, from the 14th century, express an Umbrian-Senese taste. CHAPELS (on the right as you exit): 1) of Purgatory, with 1752 floor and inlaid altar; 2) of the Incoronata, rich in marble and stucco, with a 1402 marble statue of Mary Queen; 3) of St. Alphonsus, with tombstone-list of bishops; 4) of the Baptistery.