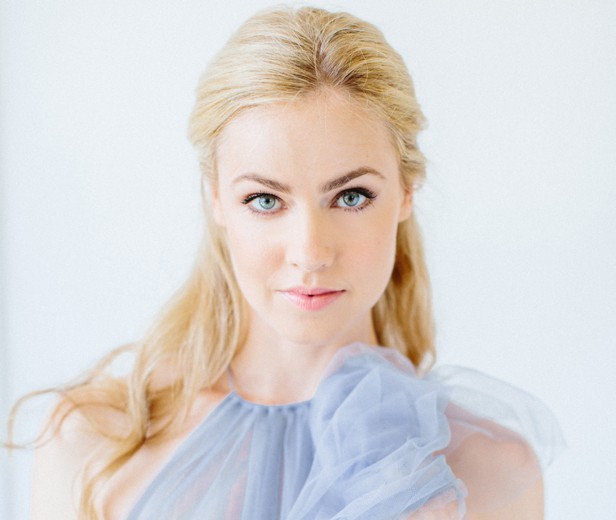 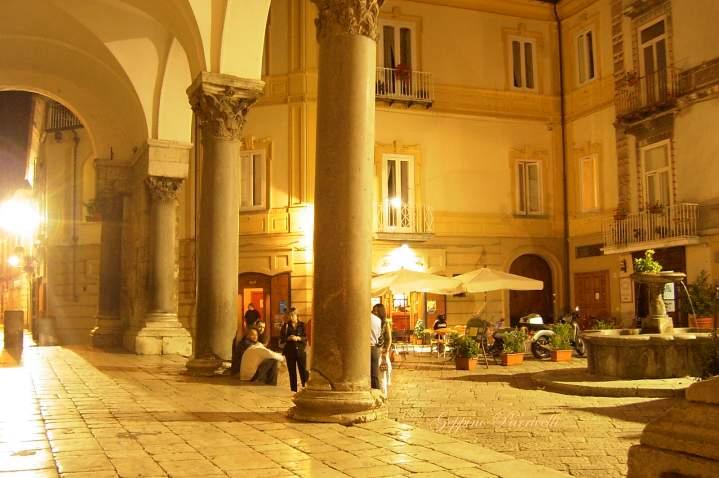 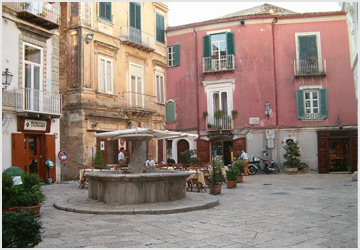 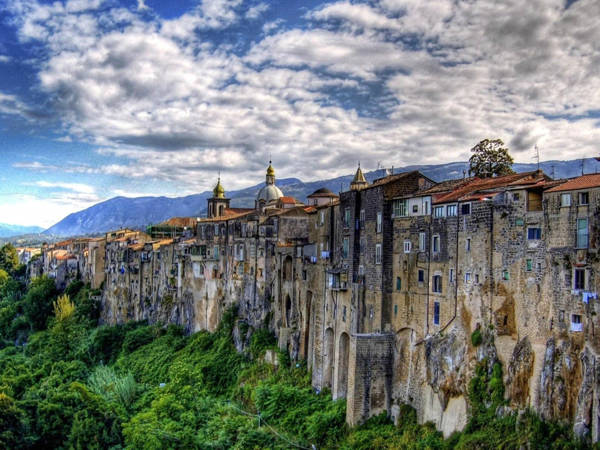 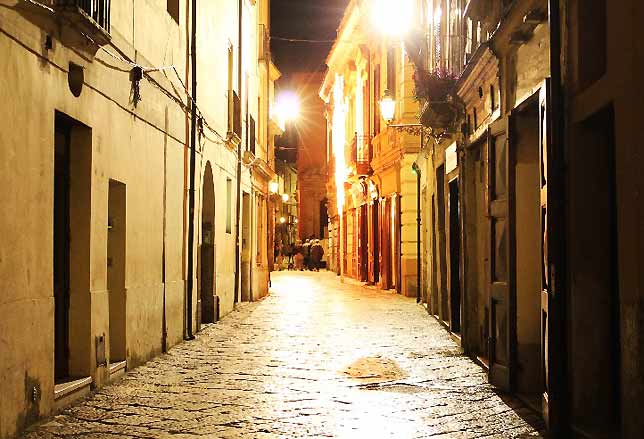 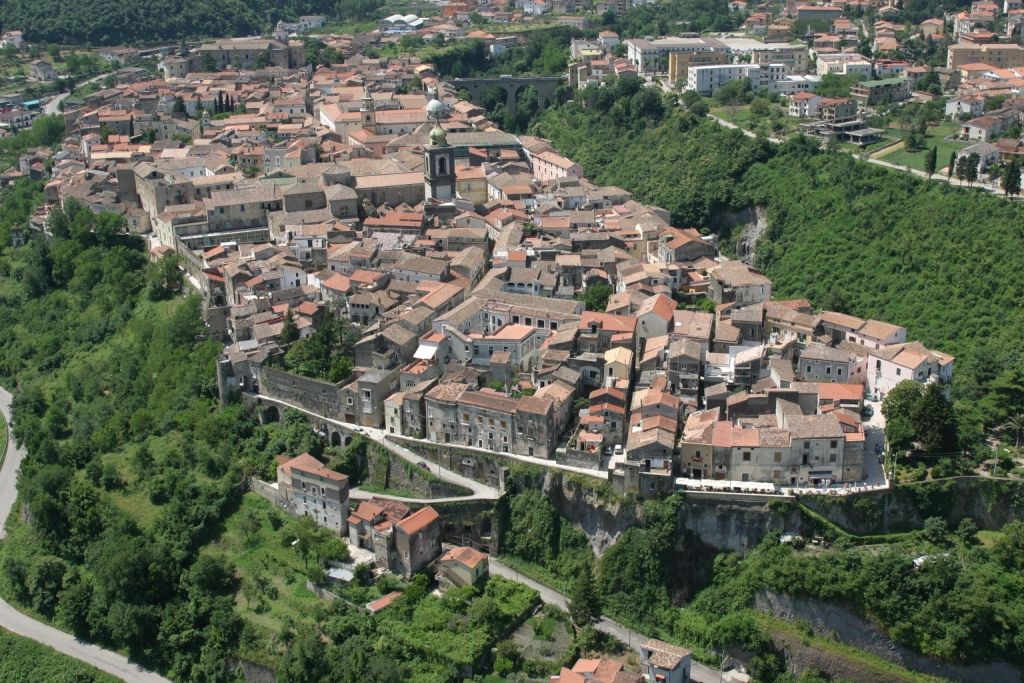 The historic citadel stands on a tuffaceous offshoot between the Martorano and the Riello, two tributaries of the Isclero River, which form a spectacular intersection of very deep valleys, in geological times the epicenter of a very violent earthquake; the entire town spreads at the foot of Mount Taburno (1394 m), beyond the Martorano stream. The plan of the historic center is made in a semicircle and measures one kilometer in length. All around it are hills. Necropolises dating back to 300 BC have come to light in the northern part of the area. The village of Sant'Agata de' Goti is rich in splendid monuments, starting with the Ducal Castle, erected by the Lombards and then modified and enlarged in the 11th century by the Normans. There are many churches to visit: the Duomo or Cathedral of the Assumption, founded in 970, preserves valuable works of art and a Romanesque crypt. The Church of Sant'Angelo in Munculanis dates back to the Lombard era. The Church of the Annunziata from 1300, which was once outside the town, is now completely incorporated into the village. The Church of San Mennato dates back to the 12th century. The Church of St. Francis is home to an archaeological exhibition with a section devoted to the Samnites and a section devoted to the Lombard period. Many events take place in the village. The most famous is the Corpus Christi Infiorata. Every year the squares in the historic center host altars for the procession's passage and are decorated with thousands of colorful flowers. Sant'Agata has often been a film set. Many films and short films have been shot here. Among others 'Il resto di niente,' inspired by Enzo Striano's novel of the same name, 'La mia generazione,' starring Silvio Orlando, Claudio Amendola and Stefano Accorsi, 'L'imbroglio nel lenzuolo,' with Maria Grazia Cucinotta and Nathalie Caldonazzo, and Alessandro Siani's film 'Si accettano miracoli,' with Fabio de Luigi and Serena Autieri. The place name Sant'Agata de' Goti, as we know it today, was formed in two different historical periods. It was in fact during the 6th century that the town was named after the Catanian saint. Instead, it is due to the presence in the city of the French De Goth family (the same as Pope Clement V), to whom Robert of Anjou granted the fief of Sant'Agata in 1300, the "de' Goti." It is in fact only during the 14th century that the toponym, as we know it today, first appears in an official writing. Another thesis, however, attributes the "de' Goti" to the passage of the Goths through these territories during the 6th century. History Historians agree[4] on the hypothesis that the present town of Sant'Agata de' Goti rises on the territory where the ancient Caudine city of Saticula once stood. Samnite necropolises have in fact come to light in the northern area of the Santagatese territory, in the area between the river Isclero and the town of Frasso Telesino. The village of Saticula was mentioned first by Livy and then by Virgil in the text of the Aeneid[5]. During the events inherent in the Second Samnite War (315 B.C.) Saticula was occupied by the dictator Lucius Aemilius but the village held out under siege for two years and was taken only thanks to the intervention of Quintus Fabius Maximus Rullianus. Dedicated in 313 BC to a Roman colony, it remained loyal to Rome during the Second Punic War. It was at this point that residential settlements probably moved away from the Isclero valley and further south. Roman-era villas have in fact been found in the area south of Sant'Agata. On the other hand, it is not possible to say when the tuffaceous fortress that now houses the historic center of Sant'Agata was first inhabited, certainly inhabited at the time of the coming of the Lombards. During the civil war Saticula sided with Gaius Marius and for this reason was later razed to the ground by the men of Lucius Cornelius Sulla. As the Romans lost control over the entire peninsula the territory of Saticula became more and more the scene of raids by the barbarian tribes of the Huns, Vandals and Goths. Thus for a long time it was thought to attribute the origin of the place name "de' Goti" to the coming of the Goths to Campania. However, this thesis appears less credible today than the one that attributes the name of the town to the French De Goth family. In fact, it is only after 1300 that official records record the full toponym. Officially, news of the toponym Sant'Agata is first found in 568 when the gastaldate of the same name was founded by the Lombards. Following the alliance with the Byzantines the town was besieged and conquered by Ludwig II in 866 while in 1066 it came under Norman rule. In 1230 it was ceded to Pope Gregory IX and then passed into the hands of the Siginulfo and the Artus. The Artus ruled the city from 1270 to 1411, but with many interruptions. It was during this period that the De Goths, a French family linked to the Bertrand de Got who was to be Pope under the name Clement V, arrived in the city. In 1506 Sant'Agata became the possession of the Della Ratta[6], in 1532 of John de Rye, of the Rams, until 1548, from 1572 to 1636 of the Cosso or Coscia[6] and finally in 1696 of the Carafa, counts of Cerreto Sannita who held it until the abolition of feudalism in 1806[7]. An episcopal see from 970 until 1986, when it was aggregated with the diocese of Telese and Cerreto Sannita, it had among its bishops St. Alphonsus Maria de' Liguori, at the head of the diocese for thirteen years, and Felice Peretti, bishop from 1566 to 1571, later Pope under the name of Sixtus V. In 2004, together with the town of Cerreto Sannita, it was one of two municipalities in Campania to be awarded the Touring Club's "Orange Flag" quality mark. A mark that it still holds today.