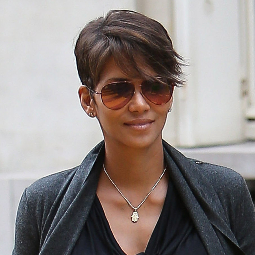 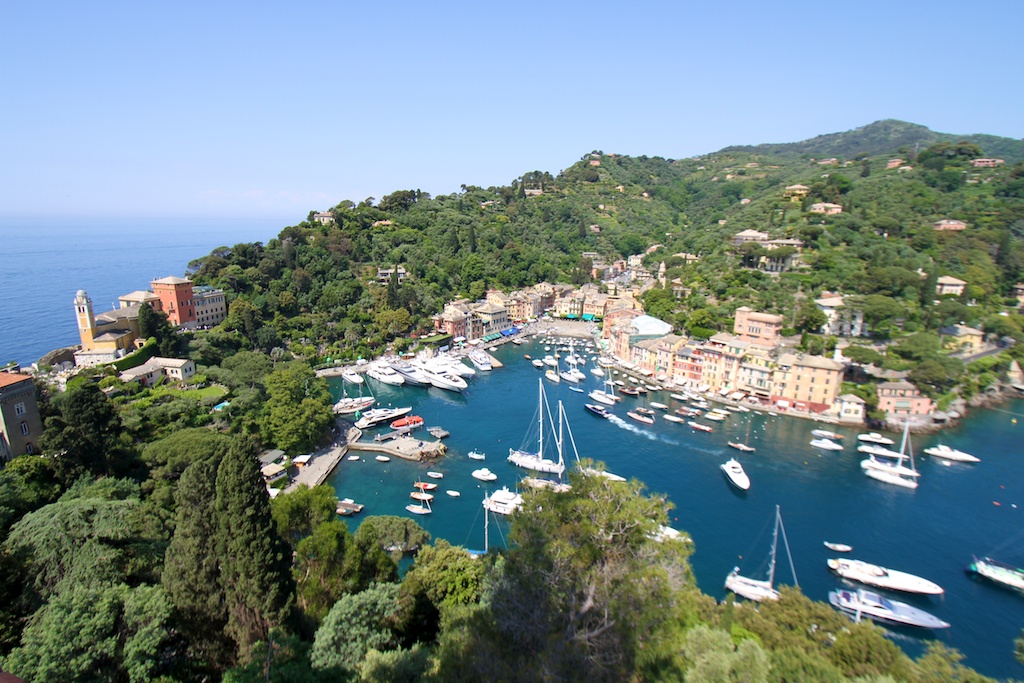 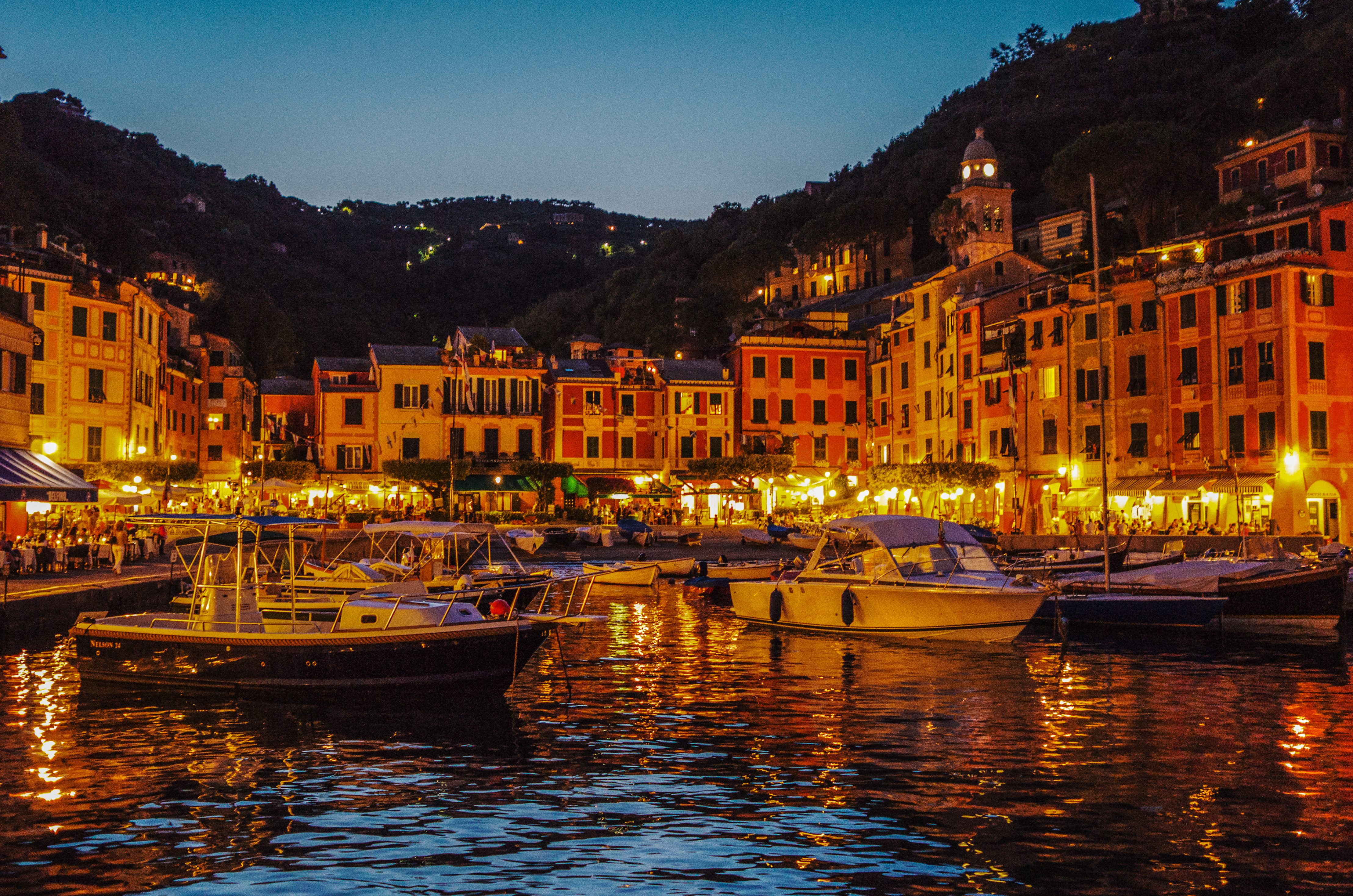 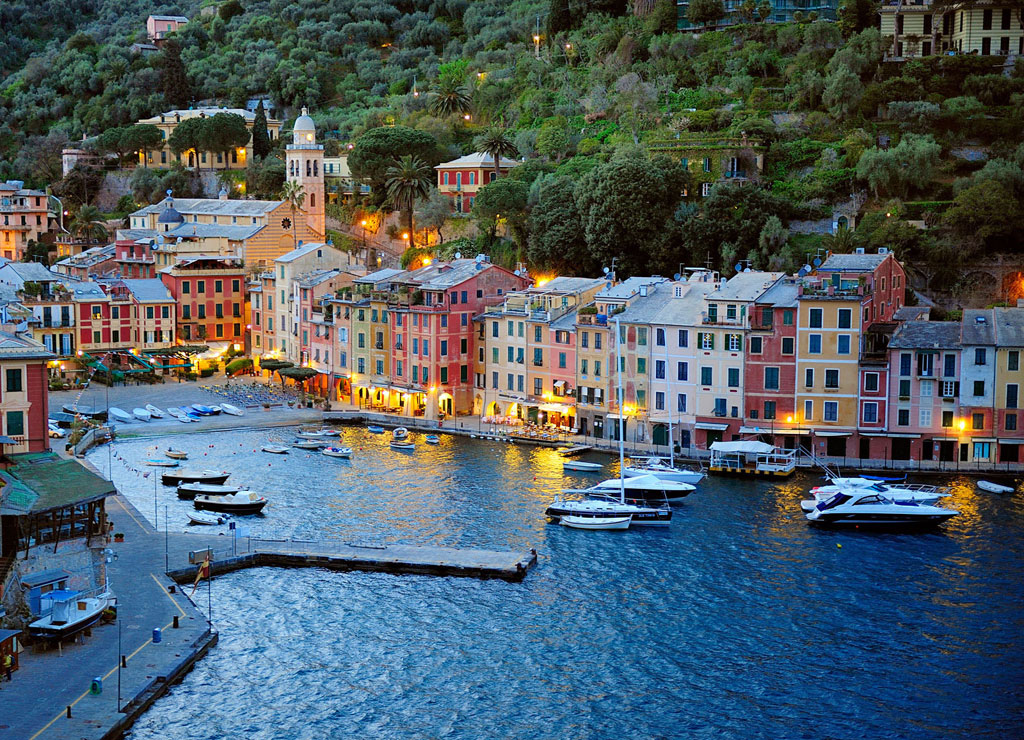 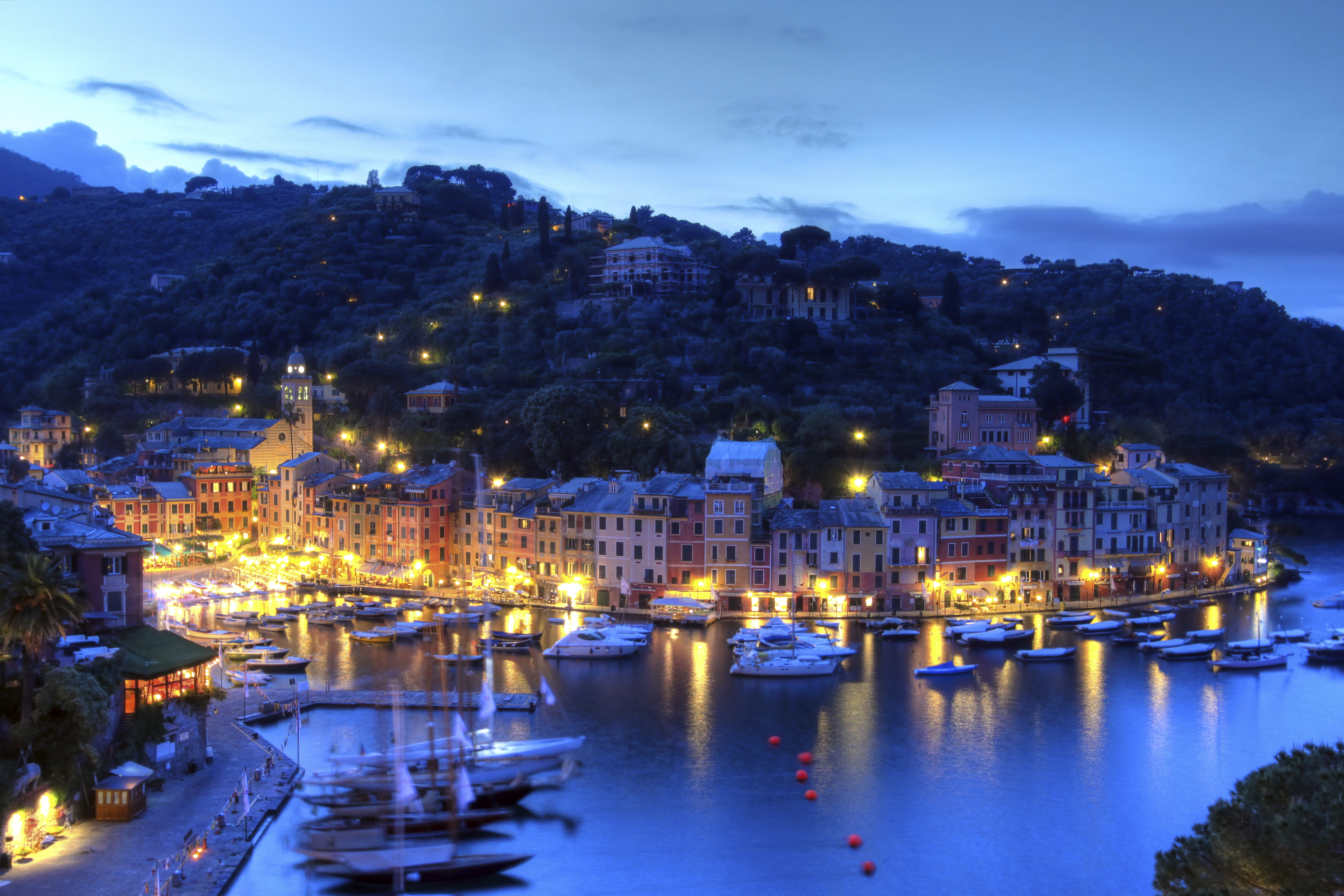 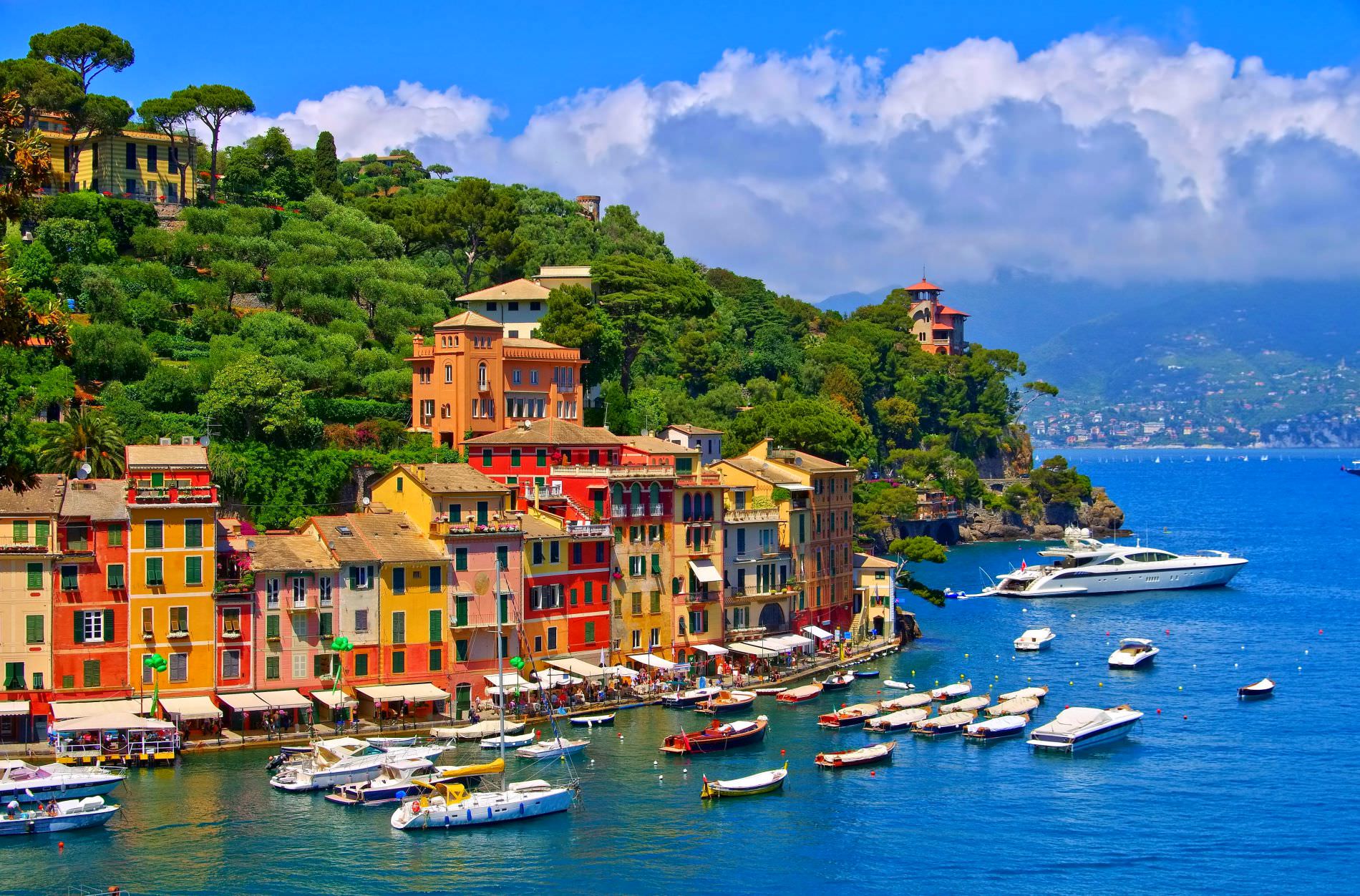 The municipality is located in the western part of the Tigullio Gulf, in a bay at the foot of the promontory of the same name, east of Genoa, effectively marking the geographic boundary between the Paradise Gulf and the Tigullio. It borders the municipality of Santa Margherita Ligure to the north, Camogli to the west, and is washed by the Ligurian Sea to the south and east. The entire municipal territory is included in the Portofino Regional Natural Park and the Portofino Marine Protected Area. The best way to appreciate the wonders of the park is to walk safely along its most characteristic and fascinating paths, all of which are properly marked. Traversing its dense network of more than 60 km, you can discover the richness and variety of the natural environments, views and complex monuments of the promontory. History The village and the promontory in a photo by Alfred Noack dated 1865 According to Pliny the Elder, the village of Portofino was founded during the Roman Empire under the name Portus Delphini[6] due, perhaps, to the large population of these animals (dolphins) in the Gulf of Tigullio. The monks of the Abbey of St. Columba of Bobbio had been operating in the area since the Lombard period; they were based in Liguria not only in Genoa but also in the Levant, in the area they had expanded from Pieve Ligure to Moneglia, with various abbeys, monasteries and cells, including that of Comorga near Carasco and San Fruttuoso di Capodimonte. The village is mentioned in a 986 diploma of Adelaide of Burgundy, wife of Lothair II of Italy, in which the donation of the village to the nearby Colombanian abbey of San Fruttuoso (now in the municipal territory of Camogli) was made official. A document from the annals of Bernardo Marangone, dated 1072, mentions the unsuccessful assault of the naval fleet of Pisa, an act victoriously opposed by the Portofinese inhabitants themselves. In 1175 the small fishing village was subjected to the administrative control, along with the adjacent Santa Margherita Ligure, of the free municipality of Rapallo, which purchased the rights to the village for 70 Genoese liras on behalf of the Rapallo consuls. Starting in 1229 it became an integral part of the Republic of Genoa, as did the entire Rapallo territory, now the seat of the local podesta office, becoming almost a refuge for the Genoese merchant navy thanks to its natural harbor. In 1409, after Emperor Charles VI of France left Genoa, the latter sold the village to Florence, but it was the Florentines themselves who returned the territory to the Genoese republic. The "little square" in a late 19th-century photograph During the 15th century it underwent several passages of administration by the most powerful feudal families of the time; in 1425 it became a possession of the Fregoso family-in the specific person of Tomaso Fregoso, former doge of the Republic of Genoa and lord of Sarzana-infeuding the village for five years. From 1430 it was the Spinola family who were the lords of the fief, under the leadership of Francesco Spinola, obtaining the government of the village for a full fifteen years. In 1445 Portofino was taken away from the Spinola by Giovanni Antonio Fieschi, according to historians as a pure act of demonstration, since it was the Fieschi himself who quickly handed the village back to the Genoese. It was again a descendant of the Fregoso family, Pietro, who obtained from 1459 a brief period of government of the village. The political and especially military alliance between the Adorno and Fieschi families with the Duke of Milan Francesco Sforza would lead to a full-fledged siege of the village in 1513. Promptly the Genoese republic, with a contingent of about 4,000, succeeded in restoring Genoese supremacy in the village by defeating, among other things, the men of Admiral Andrea Doria who ran to the aid of the castellan Filippino Fieschi by sea. Brown Castle After the Fieschi conspiracy of 1547 the territory was taken by Andrea Doria. From 1608 it was included in the territories of the captaincy of Rapallo. In 1797 with the French rule of Napoleon Bonaparte it reentered from December 2 into the Department of the Gulf of Tigullio, with Rapallo as its capital, within the Ligurian Republic. From April 28, 1798 with the new French orders, Portofino reentered the III canton, chief town Santa Margherita, of the Tigullio Jurisdiction and from 1803 the main center of the II canton of the Gulf of Tigullio in the Entella Jurisdiction. Annexed to the First French Empire from June 13, 1805 to 1814 it was included in the Department of the Apennines. In 1815 it was incorporated into the Kingdom of Sardinia, according to the decisions of the Congress of Vienna in 1814, and later into the Kingdom of Italy from 1861. From 1859 to 1926 the territory was included in the Fifth Mandamento of Rapallo of the Chiavari District of the then province of Genoa. During World War II in the nearby locality known as "Olivetta" twenty partisans were shot on the night of December 2 and 3, 1944, by fascist soldiers commanded by Siegfried Engel. This event is remembered by historians as the Olivetta massacre.