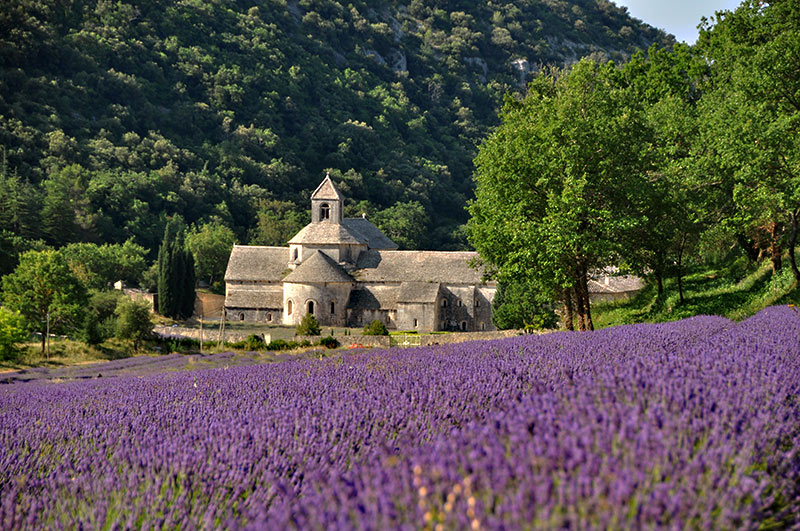 In its remote secret valley of lavender fields outside the village of Gordes, the mediaeval Cistercian Abbey of Sénanque is one of the most instantly recognisable icons of Provence. Abbaye Notre Dame de Sénanque - to give it its full name - is also a working monastery with a rich history and magnificent architecture.The Cistercians started life in Cîteaux in Burgundy in the early 12th century as a splinter group from the Benedictine order, which the founders thought had become too wealthy and worldly. Senanque from the airBy the Middle Ages there were over 700 Cistercian monasteries across Europe, always in remote spots. Sénanque is one of only three such abbeys in Provence, the others being Thoronet and Silvacane. They're sometimes called the "three provençal sisters". Sénanque was established on the Sénancole river in 1148 and took a century to build. At first it prospered, perhaps a little too much, given its ideals of austerity. Certainly the local Vaudois (Waldensians) thought as much, and laid waste to the abbey during the Wars of Religion in the 16th century. After that, like many churches in France, its fortunes fluctuated hugely. It was sold off after the French Revolution then eventually reacquired by Lérins, a Cistercian abbey based on an island off the coast of Cannes. Monks returned and left again and in 1969 Sénanque temporarily became a cultural centre: it was during this period that the lavender was planted. The current small community (just six monks as of 2018) has lived there since 1988. Their Abbot is based in Lérins and today Sénanque is technically a priory rather than a full-fledged abbey.