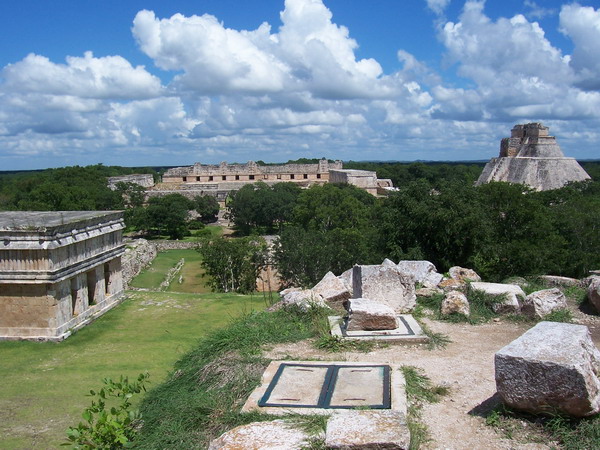 Uxmal, meaning “built three times” in the Mayan language, is one of the best preserved Pre-Columbian sites in Mexico. Uxma, together with Sayil and Labna, is a designated UNESCO World Heritage Site. It is the largest, most elegant, and most important ruin site in the Puuc area. The Pyramid of the Magician is a truly magnificent structure. Equally impressive is the Governor’s Palace and the Nunnery. The majority of the structures seen today date from the Late Classic (600-900 A.D.). The site contains numerous architectural groups which include pyramids, palaces, and a ball court. Sacbeob (raised white stone roads) interconnect the groups and extend out to nearby related sites such as Kabah. Uxmal is located in the western Yucatan off of Highway 261, about 42 miles/70 kms south of Merida, along the “Puuc Route”. This site is one of a series of Maya ruins that can be found in the general area and its architectural style is named after the low, arid hill country in which they are located. Others are Kabah, Sayil, Xlapak, and Labna.