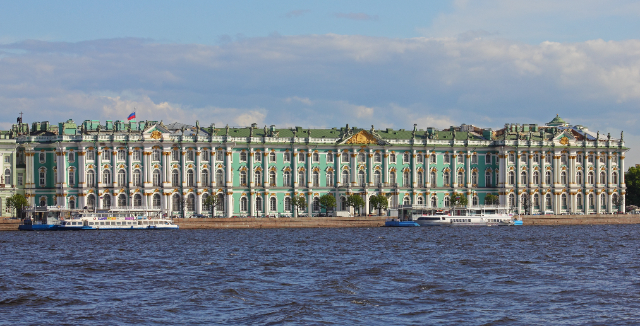 Founded in 1764 by Catherine the Great, the Hermitage Museum in Saint Petersburg, Russia is a massive museum of art and culture showing the highlights of a collection of over 3 million items spanning the globe.The architectural history of the Hermitage museum is deeply linked to that of the Winter Palace, the Imperial residence of the Tzars which, together with other four buildings, accommodates the museum today. The design of the palace was commissioned in 1754 by Empress Elizabeth of Russia to Italian-born Russian architect Bartolomeo Rastrelli in order to create a sumptuous Baroque-style Royal residence in the site of a smaller palace, overlooking the Neva river, built by Peter the Great about 40 year before. After the death of Elizabeth, the new empress, Catherine II, commissioned a substantial expansion of the palace in Neoclassical forms, as well as the construction of an array of new buildings designed by Russian, Italian, and French architects, including Ivan Starov, Yuri Velten, Giacomo Quarenghi, and Jean-Baptiste Vallin de la Mothe. Completed around 1795, the new, monumental complex – comprising, along with the Winter Palace, two other palaces and a theater – was called “Hermitage” (from a French world roughly meaning “retreat”). One of the new palaces, the so-called Great Hermitage, was aimed to create a home for the Empress’ art collection, comprising mostly Flemish, Dutch and Italian old master’s paintings. The collection was subsequently expanded to include also ancient sculptures, drawings, jewels, coins and medals. In 1852, Emperor Nicholas I opened the collection to the public (although not to all, but only to selected visitors) thus establishing the first state museum in Russia. In 1917, after the Russian Revolution, the museum and the former Imperial palace were finally opened to the general public.