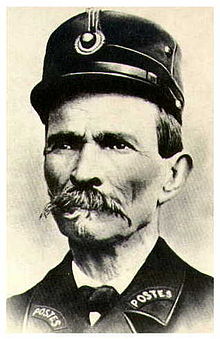 Ferdinand Cheval was born in Charmes-sur-l'Herbasse, in the Drôme département of France, and lived in Châteauneuf-de-Galaure. He left school at the age of 13 to become a baker's apprentice, but eventually became a postman. While he was on his way to deliver mail in April 1879, Cheval trips on a large stone. Its unusual shape appealed to him, and he set about collecting other singluar stones in the area. Inspired by the sculptures made by Nature, Cheval decided that he too could create beautiful shapes with stones. For the next 33 years, this postman who dropped from school at age 13 single-handedly constructed what he called his Temple of Nature. He used a wheelbarrow to carry stones and often worked at night with an oil lamp. Mr Cheval also built his own mausoleum in the same style at the local cemetery. Shortly before his death, Cheval began to receive some recognition from renowned artists like André Breton and Pablo Picasso. In 1969, André Malraux, the Minister of Culture, declared the Palais a cultural landmark and had it officially protected. In 1986, Cheval appeared on a French postage stamp. Cheval's style was influenced by ancient Egyptian and Hindu architecture and mythology. Postman Cheval's Ideal Palace (© Fulcanelli - Fotolia.com) He ornated the western facade with miniature representations of architectural styles from around the world, including a medieval castle, a Swiss chalet, a Hindu temple, a mosque, and El Harrach in Algiers.